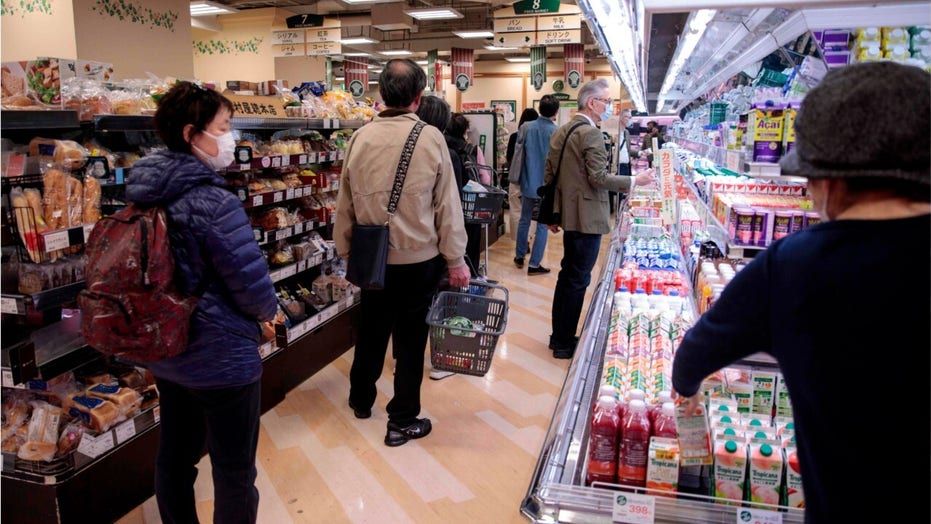 Is it safe to go into supermarkets amid the coronavirus outbreak?

Supermarkets across the U.S. have implemented safety measures to combat the spread of coronavirus but some experts have advised customers to take additional precautions.

As daily life across America is upended by the coronavirus crisis -- with mass business closures plunging the economy into freefall -- one former New York Times reporter is sounding the alarm about what he believes are flawed models dictating the aggressive strategy.

Alex Berenson has been analyzing the data on the crisis on a daily basis for weeks and has come to the conclusion that the strategy of shutting down entire sectors of the economy is based on modeling that doesn’t line up with the realities of the virus.

"The response we have taken has caused enormous societal devastation, I don't think that's too strong a word," he told Fox News in an interview Thursday.

Berenson is a former reporter who worked for the Times from 1999 to 2010 primarily covering the pharmaceutical industry. He recently came to prominence again with a book, “Tell Your Children The Truth About Marijuana, Mental Illness, and Violence,” which challenged prevailing narratives on marijuana.

'The response we have taken has caused enormous societal devastation.'

In the face of a broadening consensus on both the left and the libertarian right that sees marijuana as mostly healthy and even a positive in some circumstances, Berenson argued that the evidence instead shows a link between the drug and serious mental illness and an epidemic of violence.

Now he’s turned to challenging the narratives on the response to the coronavirus. What Berenson is promoting isn’t coronavirus denialism, or conspiracy theories about plots to curb liberties. Instead what Berenson is claiming is simple: the models guiding the response were wrong and that it is becoming clearer by the day.

Former New York Times reporter Alex Berenson has been challenging narratives on the response to the coronavirus crisis. (Alex Berenson)

"In February I was worried about the virus. By mid-March I was more scared about the economy. But now I’m starting to get genuinely nervous," he tweeted this week. "This isn’t complicated. The models don’t work. The hospitals are empty. WHY ARE WE STILL TALKING ABOUT INDEFINITE LOCKDOWNS?"

Hospitals, of course, are not empty in places like hard-hit New York City, and tales are widespread of overburdened doctors and emergency rooms. Berenson acknowledged as much in the interview Thursday.

Concerns that this virus is significantly more contagious and deadly than any ordinary flu strain are what's driving the current government approach, in America and around the world. Perhaps due in part to more testing, America reports the highest number of cases in the world right now, with more than 430,000 cases and nearly 15,000 deaths. Symptoms vary widely, with some patients reporting only minor discomfort yet others dealing with crushing physical pain and struggling to breathe, forced to go on ventilators.

But Berenson is taking a broader look. He initially challenged the model put forward by the Imperial College in London, when one of the authors of the models appeared to significantly walk back projections that the U.K. would see 500,000 people killed by the disease to closer to 20,000 -- although the author later said that the 500,000 prediction was without social distancing measures, and 20,000 was with them in place. That model is being used to advise the U.K. government on its strategy for the virus.

“That was March 22 or 23, and ever since then I’ve been paying incredibly close attention to the modeling and trying to figure out whether it lines up with what we’re seeing in reality -- and the answer is it hasn’t lined up at all," he said.

Recently he’s been focusing on discrepancies within the University of Washington’s Institute for Health Metrics and Evaluation (IHME) model. That model has come under renewed scrutiny as it has revised its metrics multiple times. It once predicted more than 90,000 deaths by August but recently issued a new estimate that has the figure closer to 60,000. Government officials say it's a model that's moving with what the country is doing.

TUCKER CARLSON ON THE CORONAVIRUS MODELS: WHY HAVE THEY BEEN SO WRONG?

"We believe that our health care delivery system in the United States is quite extraordinary," Dr. Deborah Birx said at a White House press briefing on Wednesday. "I know many of you are watching the Act Now model and the IHME model— and they have consistently decreased the number, the mortality from over almost 90,000 or 86,000, down to 81,000 and now down to 61,000. That is modeled on what America is doing. That’s what’s happening."

Dr. Anthony Fauci said that the indicators are that social distancing efforts are working: "Because remember, what you do with data will always outstrip a model. You redo your models, depending upon your data, and our data is telling us that mitigation is working."

But Berenson argues that those models have social distancing and other measures baked into them. As for further proof, he says that outside of places like New York there has not been a national health crisis that was predicted -- nor are there signs that the level of lockdown in various states has made a difference.

He has also argued, in lengthy Twitter threads, that the drop in cases seen in various states has come before lockdowns would have had an impact -- since it takes a few weeks for social distancing measures to take effect due to the window between infection and symptoms.

Berenson blames the models for a response that has effectively shut down large sectors of the economy and is causing significant financial harm to Americans. On Thursday it was announced that the number of Americans seeking unemployment benefits swelled to 6.6 million last week, surging for the third consecutive week. Congress has sought to alleviate the pain by boosting those jobless benefits.

His is a view that has seen some sympathy from President Trump, who has spoken about the "cure being worse than the problem" and has indicated that he is keen to end the strict measures as soon as is possible -- saying Wednesday he wants to re-open the economy with a "big bang."

Berenson says the correct response in the initial days of the crisis would not have been to do nothing, but instead to adopt a more measured and targeted approach.

“There was incredible pressure to do something ... so these lockdowns all cascaded, every governor tried to outdo the next. And no one stopped and said ‘OK what about Japan, they don't seem to have a terrible epidemic, they wear masks, maybe we should wear masks,” he said.

He said other measures such as protecting individuals particularly at risk, and even things such as banning large gatherings such as concerts and sporting events could have been appropriate. But now he fears it may be too late for officials to say they overreacted.

“Now we’re in a bad spot because there’s clearly a dangerous political dynamic right now -- the economy is in freefall, a lot of people are hurting. If we acknowledge what is clearly happening ... the people who made these decisions, I think there’s going to be a lot of anger at them, so they don't want to acknowledge it, so they say 'oh it's the lockdown that saved us,'” he says.

Berenson is not a known partisan. His Twitter feed and other works contain few references to specific politicians, and there’s no indication that he’s in this to bash or defend Trump or either political party. But he noted that, like with his conclusions on marijuana, there has been a distinct lack of interest from the left.

“I went to Yale and I worked for the New York Times, the people on the left hold themselves out as being science-driven, as being smarter, they think they're smarter but they won’t look at facts that won’t meet their narratives,” he said.

He voiced frustration that these arguments have been ignored by a lot of mainstream outlets.

“That is frustrating for me ... but everyone needs to hear this counterargument, whether or not it's right, you need to hear it because the damage we are doing to ourselves right now is so enormous.”