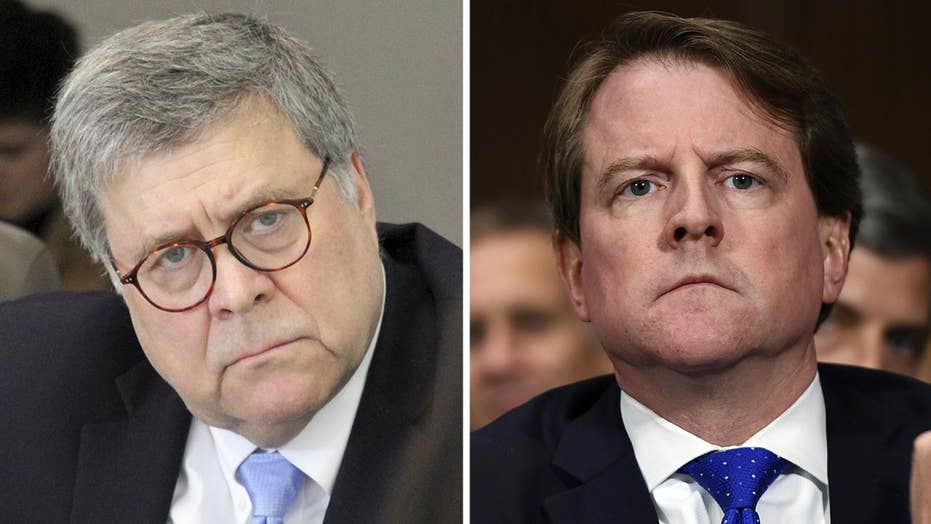 Hours after the Department of Justice (DOJ) slammed House Democrats for planning a contempt vote against Attorney General Bill Barr -- and charged that Democrats had privately admitted their subpoena requests were "overbroad" -- House Judiciary Committee Chairman Jerry Nadler announced late Tuesday that he is open to negotiating with the DOJ "without conditions."

The remarkable turn of events reopened the possibility that Barr's contempt vote may be postponed or canceled, if both sides return to the negotiating table. Nadler, however, pointedly refused to cancel the planned contempt vote prior to beginning any new negotiations, as the DOJ had demanded.

At the same time, Nadler criticized what he called DOJ "brinksmanship," and blamed the Justice Department for purportedly cutting off negotiations on May 7.

The brouhaha began Tuesday morning with a DOJ letter, written by Assistant Attorney General Stephen Boyd, that blasted House Democrats and Nadler, D-N.Y., for announcing they would vote next week on whether to hold Barr and former White House counsel Don McGahn in contempt.

In its letter to Nadler, the DOJ publicly revealed that Democrats had acknowledged in a May 24 letter they were open to "further negotiations" regarding concerns that their subpoena demands were "unworkably overbroad." Nevertheless, Democrats announced just days later their plans to hold Barr in contempt for allegedly failing to comply with those demands.

The DOJ said it was "prepared to resume negotiations with the committee regarding accommodation of its narrowed Subpoena" -- as long as Democrats removed the "threat of an imminent vote by the House of Representatives to hold the attorney general in contempt."

"The department was disappointed by the committee's abrupt termination of ongoing negotiations aimed at reaching a reasonable accommodation that respects both sides' legitimate interests regarding the materials sought," Boyd wrote to Nadler. "Further, the department is disappointed by news reports indicating that Democratic leaders have scheduled a contempt vote in the House of Representatives for June 11, 2019."

In his response late Tuesday, Nadler took issue with the DOJ's characterization of Democrats' May 24 letter, and insisted that Democrats had "always remained open to continuing negotiations. ... We are here and ready to negotiate as early as tomorrow morning."

"I ... take exception to your characterization of how our prior accommodation efforts ended," Nadler wrote back to Boyd. "Contrary to the account in your letter, the Committee has always remained open to continuing negotiations. We had an offer on the table late on the evening of May 7 when the Department suddenly declared an end to the accommodation process. My staff was still in their offices after the close of business hours awaiting a counteroffer when the Department broke off negotiations with a letter demanding that the contempt vote—scheduled to begin the next day— be cancelled if we wished to proceed with the accommodations process."

Nadler continued: "At any rate, we are ready to proceed without conditions—as shown by the initiative we took with our detailed May 24 offer. I should add that, contrary to your argument that the Committee’s continuing accommodation efforts somehow suggest that our prior requests were overbroad, our offer to compromise was intended to respond to your prior objections by seeking a middle ground.  We urge the Department to do the same."

The DOJ's letter, meanwhile, had called on the House Judiciary Committee to "moot" its May 8 vote to hold Barr in contempt, which the DOJ called "premature and unnecessary." That vote came after congressional Democrats subpoenaed Mueller's full and unredacted report on his probe of Russian meddling in the 2016 elections.

WHY DID MUELLER EDIT TRANSCRIPT OF VOICEMAIL WITH FLYNN LAWYER TO ELIMINATE KEY DISCLAIMERS?

Republicans have countered that federal law protecting secretive grand-jury information would prevent Barr from turning over the entirety of the report. The DOJ has offered Democrats the opportunity to review the report, minus those grand jury-related redactions, in a secure setting -- but those offers have been rebuffed. (In a rare public statement last week, Mueller specifically remarked, "I certainly do not question the attorney general's good faith" in deciding to make the report "largely public.")

"It would hardly make sense for the full House of Representatives to act upon the committee's prior recommendation to hold the attorney general in contempt for not complying with a subpoena that even the committee now appears to acknowledge was overbroad in seeking immediate disclosure of the entirety of the special counsel's investigative files,” Boyd wrote.

That was a conspicuous reference to the previously unreported May 24 letter to the DOJ, in which the Democrats on the Judiciary Committee wrote to privately emphasize "the Committee's willingness to engage in further negotiations to resolve this dispute" -- only to resort to public political posturing, the DOJ charged.

The Democrat-led committee also offered to "identify specific materials that if produced would be deemed to satisfy the subpoena" in an effort to make the subpoena more workable, according to the DOJ, which quoted the Committee's letter verbatim.

"In your May 24, 2019, letter, the committee appears to recognize that the subpoena is unworkably overbroad and offers -- for the first time -- to narrow the subpoena's scope to cover a much more limited set of documents," the DOJ wrote. "The department believes that the committee's new offer reflects a more reasonable request and could mitigate some of the legal barriers to disclosure that we have discussed."

ANALYSIS: BARR DETERMINED TO FIND TRUTH BEHIND ORIGINS OF RUSSIA PROBE -- AND DEMS ARE WORRIED

The letter continued: "The committee held its contempt vote only 19 days after issuing the subpoena. Traditionally, congressional committees have only proceeded with contempt votes after lengthy periods of negotiations have failed to reach an accommodation. For example, the House Oversight and Government Reform Committee negotiated with the department over the Operation Fast and Furious subpoena for months, and only voted to cite Attorney General [Eric] Holder for contempt 252 days after issuing its subpoena."

Since 1975, according to the DOJ, "committees and subcommittees have averaged 103 days between issuing a subpoena to an executive branch official and holding a contempt vote. By any measure, the committee rushed its decision and bears responsibility for the termination of the accommodation process.”

But in his letter, Nadler took issues with those characterizations.

"We cannot agree that the House’s sense of urgency here is 'premature and unnecessary,'" Nadler wrote. "It has been over 100 days since we first initiated the accommodations process on February 22, 2019.  The pace with which we are proceeding is consistent with the exceptional urgency of this matter:  an attack on our elections that was welcomed by our President and benefitted his campaign, followed by acts of obstruction by the President designed to interfere with the investigation of that attack.  All of this misconduct was documented by the Special Counsel in the documents we now seek."

In a statement, House Judiciary Committee ranking member Doug Collins, R-Ga., highlighted the DOJ's revelation that Nadler apparently signaled a willingness to work with the DOJ.

“After racing to hold Attorney General Barr in contempt, Chairman Nadler finally seems ready to join the Justice Department at the negotiating table," Collins said. "When Judiciary Democrats wield subpoena power like a sword instead of a plow, their investigations bear little fruit. The House Intelligence Committee has shown us that working with the Justice Department in good faith yields documents. Abusing subpoena and contempt authority, however, has left the Judiciary Committee with little to show for its obsessively unreasonable demands."

As for McGahn, the White House has instructed its former top lawyer not to testify, saying he is legally immune from being compelled to testify about privileged discussions occurring in the course of his official duties. Democrats have responded that McGahn waived that privilege by agreeing to speak to Mueller.

Trump did not assert executive privilege to shield any aspect of the Mueller report itself, and has derided Democrats' efforts as politically motivated attempts to keep what he's called the "Russia collusion hoax" alive -- and to distract from or derail -- Barr's own ongoing probes into Justice Department and FBI misconduct.

News of the planned contempt vote came days after Barr said he has not received answers from the intelligence community that were "at all satisfactory" in the early stages of his review into the origins of the Russia investigation. Last month, Barr appointed the U.S. attorney from Connecticut, John Durham, to lead the investigation, which is to focus on the use of FBI informants and the alleged improper issuance of Foreign Intelligence Surveillance Act (FISA) warrants to monitor a variety of individuals, including former Trump aide Carter Page.

A Barr contempt vote would be historic, but not unprecedented. In 2012, the GOP-controlled House's vote to hold the attorney general at that time, Holder, in contempt for failing to comply with investigations into the Obama administration's failed gun-running sting operation, "Fast and Furious." Holder became the first-ever sitting Cabinet member to be held in contempt of Congress in that manner.

The resolution scheduled for a June 11 floor vote would allow the Judiciary Committee to pursue civil action to seek enforcement of its subpoenas in federal court.

Such an approach would rule out so-called "inherent contempt," a process in which Congress technically can enforce contempt citations on its own -- whether by arrest or fine. In May, Barr reportedly joked about that possibility with House Speaker Nancy Pelosi, D-Calif, asking, "Did you bring your handcuffs?"