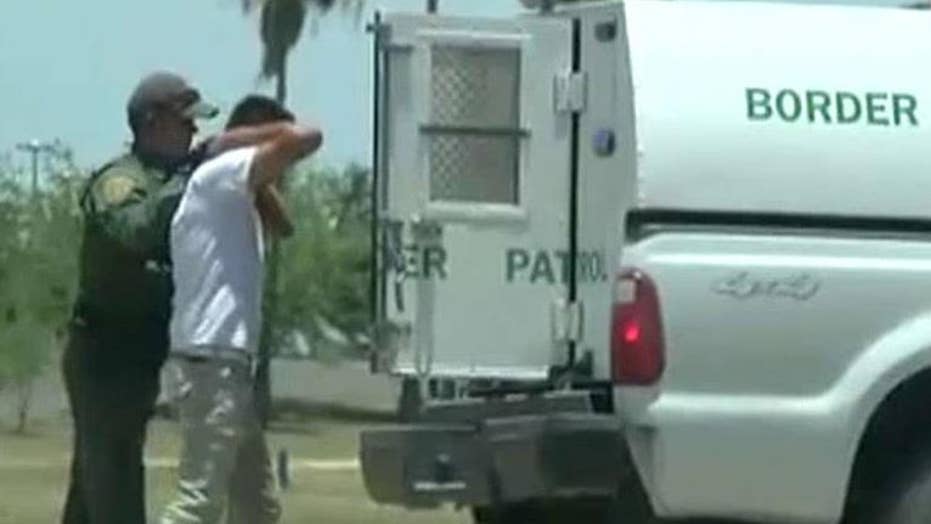 Federal lawmakers seeking to pinpoint the number of illegal immigrants who successfully sneak across the southern border ordered up a report from the Department of Homeland Security, but the agency refuses to release it and instead cites a misleading statistic that overstates the number who are nabbed, sources told Fox News.

DHS denied it is holding back the report, but sources say it was completed in November and that it shows roughly half of adults who attempt to cross the border make it - approximately 250,000 in total.

But that number is at odds with DHS’ official estimates. The agency claims authorities catch 80 percent of adults trying to sneak in, but critics say the figure is padded to make it appear border security is more effective than it really is.

"The Obama administration knows that the number of illegal aliens successfully getting across the Mexican border is 158 percent higher than they are telling people," said John Lott, president of the Crime Prevention Research Center, who assessed the statistics for Fox News. "The administration has made fraudulent changes in the numbers to hide this."

If released by the Obama administration, the true numbers could have major implications in the current presidential race, in which illegal immigration and border security have become a key issue, say observers.

One source familiar with the report told Fox News that DHS is suppressing the report for "political reasons . . . because it would 'look bad' and 'help elect Donald Trump.”

Republican lawmakers are furious that the report they ordered is not being released.

“It erodes the trust as to whether the administration is being honest with the American people about what the threat is,” said Rep. Martha McSally, R-Ariz., who serves on the Committee on Homeland Security and chairs the Border and Maritime Security Subcommittee. “This should not be a partisan issue. Democrats, Independents and Republicans in my community want to make sure that border communities are safe.”

The report was requested by the House and Senate Appropriations Committees as part of the Fiscal 2016 Omnibus Bill, but has been shrouded in secrecy. Viewed by a select few in key administration figures, critics say it is being withheld because of its explosive findings, which could potentially benefit GOP nominee Donald Trump. FoxNews.com requested a copy from both DHS and the White House, but was told the report is not yet finished, an assertion disputed by sources familiar with the process.

“Any suggestion that DHS is delaying release of a report on new border enforcement measures for political reasons is false,” a DHS spokesperson told Fox News. “To the contrary, at Secretary Johnson’s direction, DHS has been making significant progress in the development of such measures. At this point, however, the work is still preliminary and requires further refinement, to ensure the new measures are accurate and reliable.

“The November 2015 report purportedly obtained by Fox News is one building block provided by a research organization DHS has been working with to develop these measures," the spokesperson added.

The study was written by analysts from DHS and the outside firm Institute for Defense Analyses, and is the most extensive survey of illegal activity and U.S. enforcement at the southwest border to date. Researchers went to the southwest border three times over 9 months and conducted independent surveys of Mexican migrants caught by the Border Patrol. They also reviewed Border Patrol intelligence, internal DHS records, apprehensions at ports of entry and detention records. The report was peer reviewed by a number of experts.

The document examines, in part, the Interdiction Effectiveness Rate (IER), or the number of adults caught at the border by law enforcement. But when DHS briefed members of the House and Senate earlier this year, sources familiar with the report say it was blended with non-IER statistics, such as unaccompanied children and those who surrendered to Border Patrol. Those figures were used to buttress the claim that only 20 percent of would-be illegal immigrants are successful when the real IER estimation was half, sources said.

“There is a distrust, because of the shifting measurements,” McSally said. “We would like to follow up with those researchers and better understand what is going on related to suppressing those results, if that’s an accurate report.”

It is concerning, but not surprising, that the Obama administration has kept secret this credible research, said Jessica Vaughan, director of policy research for the Center for Immigration Studies.

The taxpayer-funded research should be released to the public and available for review by experts, said Edward Alden, senior fellow at the Council on Foreign Relations and a co-author of the CFR report, “Managing Illegal Immigration to the United States: How Effective is Enforcement.”

“How can we expect Congress to make decisions on border enforcement if it doesn’t know how many people are entering illegally, if it doesn't know the apprehension rate, if it doesn’t know the detection rate…. what percentage of people the border patrol is seeing,” Alden said. “All of these are critical variables about making intelligence decisions about border enforcement and they simply at the moment are not in the hands of the Congress and the public.”

The irony is the data, by and large, reveals what appears to be a “good news” story, Alden said.

“We have seen a significant decline in illegal immigration from Mexico to the United States and it's clear that the Border enforcement build-up has been a big reason why that decline has been as sharp as it has been,” Alden said. “Our estimates suggest that the number of successful illegal entries has fallen from extremely high numbers -- more than 3 million annually up to the mid-2000s -- to much, much smaller numbers, about 250,000 last year. Keep in mind that these numbers do not represent individuals who came to stay in the United States – these are the total number of illegal border crossings.”

The numbers have fallen dramatically in recent years partly due to economic and demographic changes, such as a smaller population of young Mexicans looking for work, Alden said. But enforcement also has played a significant role because the odds of getting caught while crossing have gone up and, more importantly, the consequences for getting caught are much greater, he acknowledged.

The Institute for Defense Analyses report is not classified or marked in any way and can be publicly disseminated without restriction, sources said. But the chances of it getting out look dim, as a decades-old report also commissioned by DHS -- the 2006 "CBP Apprehensions at the Border" study prepared by the Homeland Security Institute -- also has never been released.