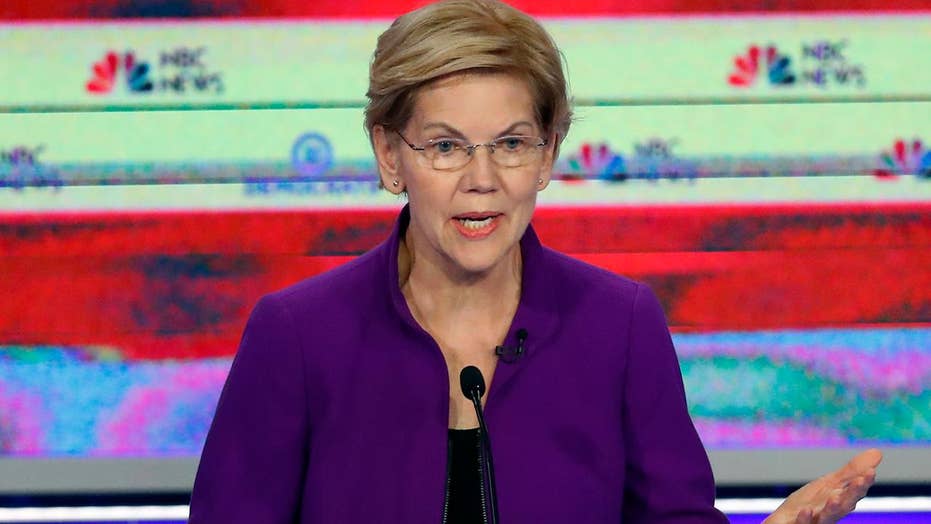 Self-proclaimed democratic socialist Sen. Bernie Sanders, I-Vt., made a name for himself in 2016 by demonizing wealth and corporations, and now several of his Democratic rivals are taking his cue -- launching their own attacks against big business and targeting the "1 percent."

Wednesday night's Democratic debate -- which did not feature Sanders, who is among the candidates appearing Thursday -- featured a theme of portraying "profits" as bad and the corporations who seek them as nefarious. Candidates bashed those targets more than a dozen times on stage in Miami.

"Giant corporations have exactly one loyalty, and that is to profit," Sen. Elizabeth Warren, D-Mass., said, while characterizing American industrial policy as "let giant corporations do whatever they want to do."

"I will single out companies like Halliburton or Amazon that pay nothing in taxes and our need to change that," he said.

Booker also said there was "a serious problem in our country with corporate consolidation," and how businesses are getting too powerful.

"At the end of the day we have too much of a problem with corporate power growing," he said. "We see that with everything from Citizens United in the way they are trying to influence Washington."

Warren echoed this, claiming that individuals and smaller companies end up feeling the effects.

"There is way too much consolidation now in giant industries in this country," she said. "That hurts workers, it hurts small businesses, it hurts independent farmers, it hurts our economy overall.

New York City Mayor Bill de Blasio joined the chorus of candidates against businesses growing too powerful, saying, "We are supposed to break up big corporations when they're not serving our democracy."

"For all of the American citizens out there who feel you are falling behind or feel the American dream is not working for you, the immigrants didn't do that to you. The big corporations did that to you."

Candidates specifically targeted insurance and pharmaceutical companies, accusing them of taking advantage of those who are suffering.

"There are too many people profiteering off of the pain of people in America from the--from pharmaceutical companies to insurers," Booker said.

Warren invoked vampire-like imagery when she noted that they "sucked $23 billion in profits out of the health care system" last year. Booker said pharmaceutical companies "should absolutely be held criminally liable" for opioid addiction.

TOM HOMAN LEVELS 2020 DEMS' FAR-LEFT IMMIGRATION IDEAS: NONE OF THEM HAVE A 'CLUE' HOW TO DEAL WITH BORDER CRISIS

Beto O'Rourke also called for "accountability" for pharmaceutical companies in the context of the opioid crisis.

"In my administration, we will hold them to account," he said. "We will make sure that they pay a price."