Half of the qualifiers for the first 2020 Democrat primary debate, including Elizabeth Warren, Beto O'Rourke and Cory Booker, will have an opportunity to attack the party frontrunner without pushback; Peter Doocy has a preview from Miami, Florida.

MIAMI -- The first primary debate of the 2020 season saw cracks of daylight emerge in a Democratic field that has largely played to the progressive base, with the candidates clashing sharply over controversial policies like "Medicare-for-all" and calls to decriminalize illegal border crossings -- while taking ample shots at President Trump in the process.

Staking out the left flank of the party on stage Wednesday night in Miami were Sen. Elizabeth Warren, D-Mass. -- the highest-polling candidate in the first debate batch, with Round 2 coming Thursday -- and long-shot Bill de Blasio, the New York City mayor.

They were the only candidates to raise their hands when asked who's willing to give up their private health insurance for a government option.

“I’m with Bernie on Medicare-for-all and let me tell you why,” she said. “I spent a big chunk of my life studying why families go broke and one of the number-one reasons is the cost of health care. Medical bills.”

Warren said those who challenge the policy are really saying "they just won't fight for it."

But the issue sparked fireworks when former Texas Rep. Beto O’Rourke said he would not replace private health insurance. De Blasio interrupted to say, “private insurance is not working for tens of millions of Americans.” 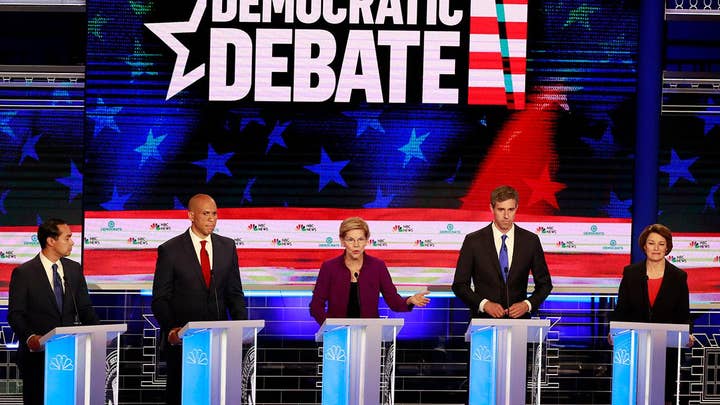 Former Rep. John Delaney, D-Md., who has positioned himself as more of a centrist, scolded his rivals by saying they “should be the party that keeps what’s working and fixes what’s broken.”

“We’re supporting a bill that would have every hospital close,” Delaney said.

Sen. Amy Klobuchar, D-Minn., called a single-payer health care system a "bold approach" but said she worries “about kicking half of America off their health insurance in four years, which is exactly what this bill says.”

The policy was just one wedge on stage Wednesday night. The candidates were largely unified -- as expected -- in their condemnation of Trump, with O'Rourke calling for "impeachment now" in the wake of Robert Mueller's report.

“It is the only way we can protect this country,” he said.

But O'Rourke, who was among a handful of candidates who gave some responses in Spanish, repeatedly found himself on the receiving end of swipes from rivals on stage. Former Housing Secretary Julian Castro was among those landing blows as he sought to distinguish himself from the field on the issue of immigration, perhaps gaining traction by targeting the one-time Democratic darling from Texas. And while Warren stayed center stage by hammering her myriad policy proposals and talking up the class divide, the debate production itself gained outsize attention when technical difficulties marred part of the NBC-hosted program -- forcing the moderators to cut to commercial break to resolve them when candidates couldn't hear questions as other voices were piped in over inadvertently open microphones.

Trump, from Air Force One en route to Japan, jeered the network.

But among those looking for a breakout, Castro may have come close with his vocal -- and controversial -- call for the decriminalization of illegal border crossings, challenging his fellow presidential hopefuls to agree to repeal the section of the Immigration and Nationality Act that applies.

“I want to challenge all of the candidates to do that,” Castro said. “If you truly want to change the system then we have to repeal that section.”

He called out O'Rourke by name for not supporting his call. O'Rourke then said he's more interested in comprehensive reform, saying Castro was looking at "one small part of this."

Discussing the heartbreaking photo that emerged this week of a migrant father and toddler daughter who drowned trying to cross the Rio Grande, Castro said it "should piss us all off."

Sen. Cory Booker, D-N.J., also weighed in, saying that the U.S. “has the power to better deal with this process through the civil process than the criminal process.”

“Our country has made so many mistakes by criminalizing things,” Booker said. There is a humane way that affirms human rights and dignity.”

“Is that what you will tell the parents of those two soldiers who were just killed in Afghanistan?” she said. “‘Well, we just have to be engaged.’ As a soldier, I will tell you, that answer is unacceptable. We have to bring our troops home from Afghanistan.”

“I don't want to be engaged,” Ryan countered. “... But the reality of it is that if the United States doesn't engage, the Taliban will grow. And they will have bigger, bolder, terrorist acts. We have got to have some presence there.”

But despite their differences on major issues, the candidates rallied to downplay economic successes and growth under the Trump administration, especially Warren.

"It's doing great for a thinner and thinner slice at the top," Warren said of the economy.

The Trump campaign and Republican National Committee rapid response team, though, sent email blasts and tweets "fact-checking" and defending the president's economic record and the creation of "6 million jobs" since Election Day 2016.

Warren was the highest-polling candidate among those on stage Wednesday but others were looking for their breakout moment or to recapture lost momentum, especially contenders like O'Rourke of Texas. He didn't appear to get it. Top-polling candidates including former Vice President Joe Biden and Sen. Bernie Sanders of Vermont are set to face off Thursday night on the same stage.

The format and sheer number of candidates, though, meant candidates had limited opportunity even during two hours of debate to make their case.

The rules, set by the Democratic National Committee, gave candidates 60 seconds to answer questions from the NBC, MSNBC, and Telemundo moderators, and 30 seconds to respond to their follow-up questions. The candidates could not give opening statements but gave closing remarks later in the night.