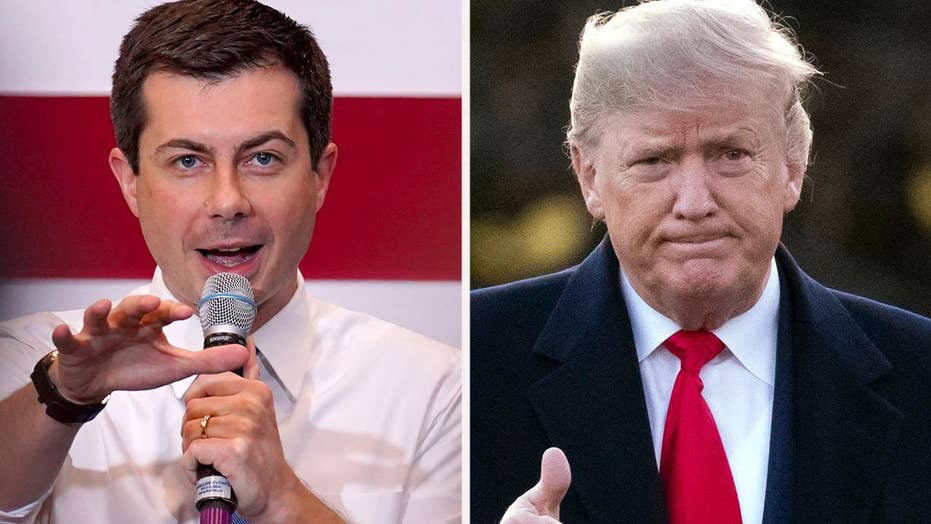 In the wake of claims that an errant missile fired by Iran brought down a passenger jet earlier this week, some Democrats and media voices have appeared to make the case that President Trump at least shares in the blame for the death of 176 civilians.

Rep. Jackie Speier, D-Calif., pointedly laid the blame for the tragedy at Trump's feet, in an interview Thursday.

“If what is being projected is true, this is yet another example of collateral damage from the actions that have been taken in a provocative way by the president of the United States,” Speier told CNN.

This, following a similar suggestion from Democratic presidential candidate Pete Buttigieg overnight, which appeared to assert a butterfly-effect argument that if the president had not ordered the U.S. military strike that killed Iranian Gen. Qassem Soleimani, Iran would not have retaliated, and therefore, the passenger jet would not have been shot down.

“Innocent civilians are now dead because they were caught in the middle of an unnecessary and unwanted military tit for tat,” Buttigieg tweeted. “My thoughts are with the families and loved ones of all 176 souls lost aboard this flight.”

“I think this is a very, very unfortunate incident that has affected so many people and so many families, and this is one of these consequences of this escalation and this state of war that we are in,” Gabbard said, urging the president to have “foresight” and look at the “consequences” of war with Iran.

“This is the consequence of this escalation of war that further points to why we need to deescalate these tensions now,” she said. “And I urge President Trump to do so and get back to the negotiation table and make sure this doesn’t move forward.”

The connection between the Soleimani strike and the Iranian decision to fire missiles at U.S. bases in Iraq is not hard to make. However, efforts to implicate Trump in the plane tragedy have faced a fierce backlash, even from voices not normally allied with the U.S. president, in part because Iran ultimately fired those missiles and because the chain of events did not start with the Soleimani strike alone.

Last month, a U.S. defense contractor was killed and others were wounded in an Iran-linked rocket attack in northern Iraq. In response, the U.S. military carried out “precision defensive strikes” in Iraq and Syria, on sites housing Kataeb Hezbollah, an Iran-backed Iraqi militia. The strikes killed 25 fighters.

Days later, hundreds of protesters, including members of Iranian-backed militias, stormed the U.S. Embassy compound in Baghdad—one of the most heavily fortified U.S. diplomatic missions in the world. The attack, which raised the specter of the 2012 Benghazi attack in which four Americans died, prompted the Pentagon to send hundreds of additional troops to the Middle East; more than 100 U.S. Marines were sent to the embassy alone to bolster security.

Trump then ordered the strike that killed Soleimani, the head of the Islamic Revolutionary Guard Corps’ elite Quds Force, among other military officials at Baghdad International Airport.

Then, late Tuesday, Iran fired 16 ballistic missiles into Iraq aimed at U.S. military bases. There were no casualties at those bases, but Pentagon officials said Thursday that the Ukrainian passenger plane that crashed around the same time after taking off from Tehran was shot down by mistake by Iranian missiles.

All 176 people on board the flight were killed.

The Associated Press, meanwhile, on Thursday posted an article headlined: "An Iranian general dies in U.S. attack, and innocents suffer." The outlet changed the headline after it was blasted by critics including on social media. The story was eventually republished with a different headline: "As Iran and U.S. take step back from the brink, Canada grieves."

An Associated Press spokesperson attempted to explain the situation when reached by Fox News.

“The headline was updated to more clearly describe what the story is about: Canadians struggling to come to terms with how the killing of an Iranian general in a U.S. drone strike may have led to the deaths of dozens of their citizens in a plane crash,” an AP spokesperson told Fox News.

“AP stories and headlines are routinely updated, as wire stories are. The original headline on this story when it was published yesterday evening was ‘An Iranian general dies in a U.S. attack, and Canada suffers.’ It became ‘An Iranian general dies in U.S. attack, and innocents suffer,’ when new information was added to the story. Overnight the headline became ‘As Iran and US take step back from the brink, Canada grieves,” the spokesperson continued.

After the headline change, the story still featured a paragraph that some took issue with, as it implies that the conflict with Iran “had begun” when Trump ordered a strike on Soleimani.

Others came forward to defend the president. Rep. Brian Mast, a Republican war veteran from Florida, said that the attack on Soleimani “was not unnecessary,” and that no matter what the president does, his critics will take the opposite position.

“It was not unjustified, and this is a common theme from the left,” Mast said on “Fox & Friends” Friday. “These American apologists that like to go out there and say that because America did something, this resulted in some other country going out there and taking some unnecessary actions, some ill-fated action. And it’s not the Americans’ fault—it’s the fault of those who went out there and took those actions themselves.”

Mast discussed a past sentiment that “politics end at the water’s edge,” but argued that that is “no longer true.”

“No matter what the president does, he’s going to be wrong in doing,” Mast said. “If he exercises diplomacy to go talk to Kim Jong Un or talk to Vladimir Putin, that’s wrong. If he withdraws our troops out of harm’s way on the border of Turkey and alongside the Kurds, then he’s wrong. ... Whatever he does, the other side is going to say he was incorrect for doing that for whatever the made-up reason is that they’re going to come up with.”

For the time being, the entire situation may be de-escalating. The president on Wednesday said that Iran “appears to be standing down,” a signal of a desire to reduce tensions in the region.

“The fact that we have this great military and equipment, however, does not mean we need to use it… we do not want to use it,” he said. “The U.S. is ready to embrace peace with all who seek it.”