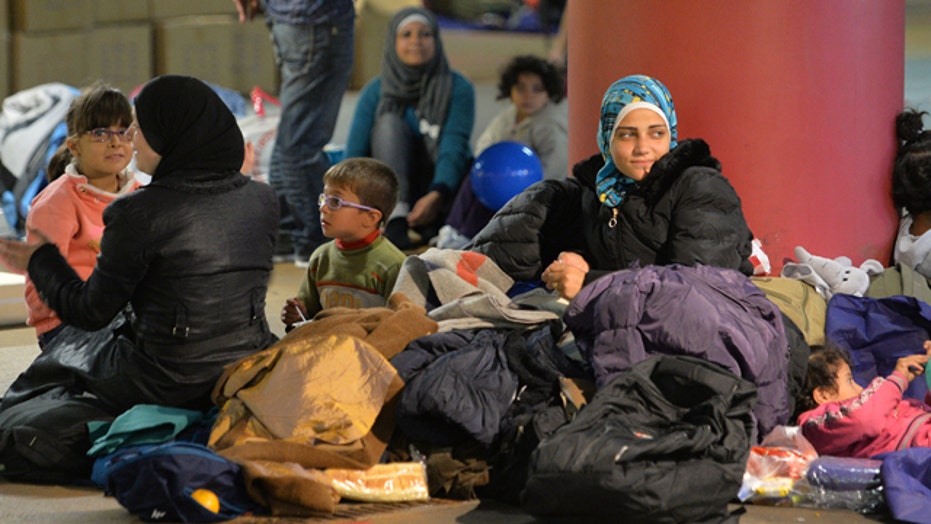 Does US need to get involved in Europe's refugee crisis?

Washington Democrats and Republicans disagreed Sunday about how much the U.S. has contributed to the fighting and turmoil in Syria and elsewhere in the Middle East and about the extent to which America should help with the resulting refugee crisis in Europe.

Connecticut Sen. Chris Murphy, a Democrat and Senate Foreign Relations Committee member, suggested the country take in 50,000 refugees, far more than the 10,000 over roughly the next year called for by the Obama administration.

“It doesn’t stand to reason that Germany is going to take 800,000 and the U.S. has only taken 1,500,” he told “Fox News Sunday.” “If we want credibility in the region, we’ve got to be seen as a partner in trying to solve this humanitarian crisis.”

Murphy said the U.S.-led war in Iraq, under the Bush administration, ultimately contributed to the further destabilization of the region, which helped spawn such terror groups as the Islamic State, also known as ISIS, and the four-year civil war in Syria.

However, he argued the Obama administration, which has provided limited military support for rebels trying to overthrow the regime of Syrian President Bashar Assad, is not the root of the crisis.

“I don't think you can say that the Syrian war wouldn't have happened if it wasn't for the invasion of Iraq,” Murphy said. “But we certainly contributed to the ongoing mess in that region and inside Syria because of our occupation, our invasion, which after a set of circumstances, led to the development of ISIS. … I think we have a responsibility.”

Murphy also said he hasn’t heard “a coherent plan” for resolving problems in Syria and elsewhere in the region from Republicans who say that President Obama hasn't done enough.

Hundreds of thousands of Syrians have either been displaced or have recently fled the country, going into neighboring Turkey, on their way to Western Europe. And they have been joined by others in Iraq, Pakistan and elsewhere in the Middle East trying to escape abject poverty and Islamic extremists.

Wisconsin Sen. Ron Johnson, a Republican and chairman of the Senate Homeland Security and Government Affairs Committee, appeared open to the U.S. doing more to help in the crisis but was steadfast that such efforts should not compromise national security.

“It is not the fanciful to think that ISIS may be assaulting some of those refugees with some of their operatives,” he told “Fox News Sunday.” “We are taking shortcuts in terms of vetting process. …  . And we need to be first concerned about our own national security. So we are a compassionate nation, but we've got to fully vet the individuals that we would take in.”

He disagreed with Murphy over the extent to which the U.S. has contributed to the crisis. Like other critics of Obama administration foreign policy, Johnson argued the U.S. failed to secure a deal to leave behind U.S. security forces in Iraq when American troops withdrew in 2011.

“The historic blunder of this administration is not leaving a stabilizing force behind in Iraq,” he said. “I do not believe Syria would have spun out of control, certainly. ISIS rose from the defeated ashes of what was Al Qaeda in Iraq.”

A Democratic and a Republican presidential candidate also commented Sunday on the situation.

Republican candidate and Ohio Gov. John Kasich told Fox News that he backs the administration’s plan to increase the number of refugees but not at a risk to Americans.

“I support that [but] think it's very important that we don't let anybody infiltrate who's part of a radical group,” he said. “America needs to be part of this solution.”

Democratic presidential candidate Sen. Bernie Sanders declined to say how many refugees should enter the U.S., as the United Nations calls for as many as 65,000 Syrians.

The Vermont independent also urged Americans to end the blame game to focus on solving the current situation.

“I think it's impossible to give a proper number until we understand the dimensions of the problem,” he told NBC’s “Meet the Press.” “Much of what I feared would happen in fact did happen -- massive destabilization in that region. … Really, the issue now is not who is at fault, the issue is now what we do.”