“The actual texts of the proposals they’ve sent have contained provisions that would functionally nullify federal immigration law,” one source familiar with the negotiations told Fox News, calling the riders “very extreme and very radical.”

President Trump requested $4.5 billion in May to help fund agencies combating the escalating humanitarian crisis at the southern border, but the request has been bogged down by negotiations. Democrats have blamed Trump for the crisis and accused the administration of acting cruelly to those seeking asylum, while Republicans have blamed loopholes that allow asylum seekers to be released into the country as claims are processed, and called on Democrats to support closing those loopholes and funding border security.

In particular, Republicans have drawn attention to the use of children as a de facto passport for those seeking to enter the country via the southern border and claimed that children are frequently re-used by those seeking to piggyback off them to gain entry to the U.S. given restrictions on how long those with children can be detained. Former Department of Homeland Security Secretary Kirstjen Nielsen said in March that "children are being used as pawns to get into our country."

"We have encountered recycling rings, where innocent young people are used multiple times to help aliens gain illegal entry," she said. Acting DHS Secretary Kevin McAleenan testified this month that “unless you’re a single adult, it is very unlikely you’ll be repatriated.”

But amid negotiations over the latest border bill, a source familiar with the talks told Fox News that riders, submitted in writing by House Democrats, include one that would stop border agents from conducting any asylum interviews. Another controversial rider, according to two GOP sources, would prevent the funds from being used by the Department of Health and Human Services (HHS) to share information on sponsors of child migrants, potential sponsors or their households with DHS.

Republicans say the effect would be to prevent HHS from sharing information about child smugglers and traffickers present in the U.S. with the department responsible for enforcing immigration law.

Another rider allegedly includes language that would require the federal government to prospectively notify illegal immigrants that if they bring an unaccompanied child into the country and sponsor them, their illegal status would in no way be used against them, a source said, and that the child will be delivered to them without any reservation.

“So we’d not only be protecting the child smuggling loop, we’d be advertising the child smuggling loop to illegal aliens throughout the United States who would in turn then be able to have confidence they could pay a smuggler in a transnational criminal organization to smuggle a child into the country that we would then tell them we would deliver to them regardless of the law breaking involved,” the source said.

Democrats on the committee acknowledged to Fox News that there are “active discussions about a supplemental appropriations bill to address the humanitarian crisis President Trump has helped create at the border” but brushed off claims that such proposals would assist child smuggling as "absurd."

“Given the Trump administration’s terrible track record on immigration policy, House Democrats refuse to give President Trump a blank check and are insisting on policy provisions that protect the rights and dignity of migrants,” Evan Hollander, spokesman for Appropriations Committee Democrats, told Fox News.

“These provisions strengthen the wellbeing of children and families, and claims they would affect child smuggling are absurd and false,” he said.

Another one of the riders, a source said, would nullify the Migrant Protection Protocols (MPP) by stripping funding for the appropriate section of the U.S. code. Those protocols say that illegal immigrants can be returned to Mexico while their immigration proceedings are held.

One Republican told Fox News that it was a sign of how far left the Democrats in the House had moved, and accused them of engaging in “make-believe” government. 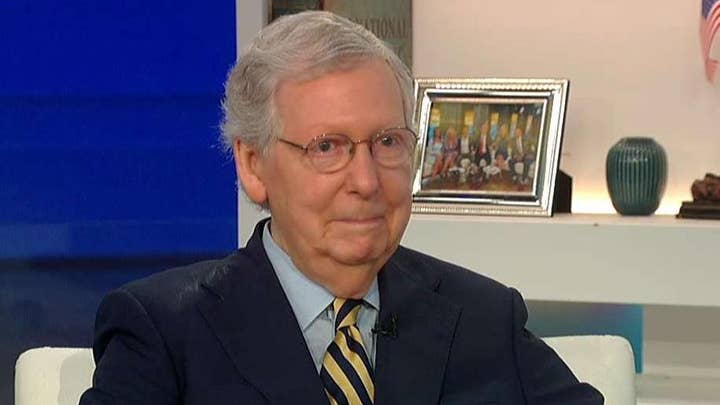 The negotiations come amid an ever-increasing flow across the border from Central America. Customs and Border Protection said that it encountered more than 144,000 migrants at the border in May, a 30 percent increase from the prior month and double the influx recorded at the beginning of the year.

Trump announced this month that he had secured a deal with Mexico that would see the country take tougher measures on illegal immigration in exchange for the U.S. dropping planned tariffs. Part of that deal includes the U.S. expanding the policy of returning asylum applicants to Mexico while their claims are processed. According to a joint declaration issued by the State Department, Mexico will take “unprecedented steps to increase enforcement to curb irregular migration, to include the deployment of its National Guard throughout Mexico, giving priority to its southern border.”

"I think it's safe to say the president is getting more cooperation out of Mexico than he is out of congressional Democrats," said McConnell.