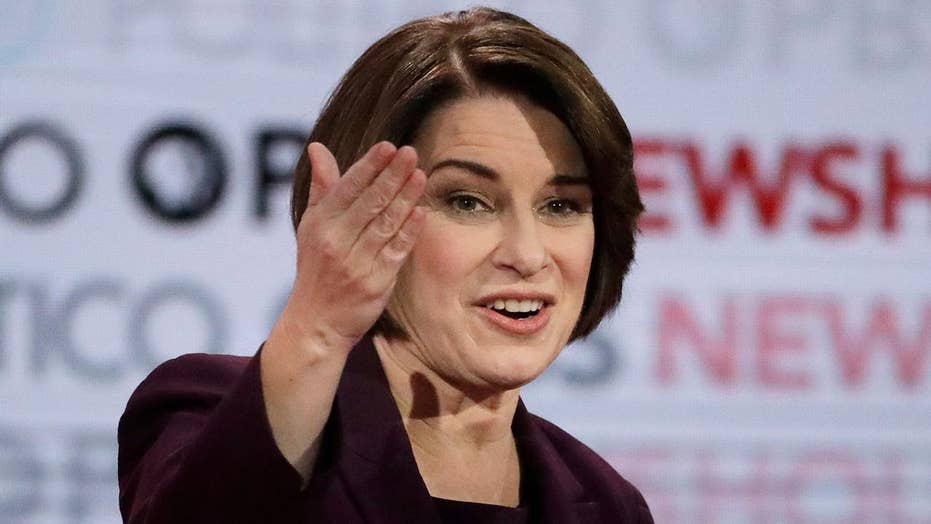 Democratic presidential candidate Amy Klobuchar said during her 2006 Senate run that "no one wants abortions" and the procedure should be "rare" -- remarks that strike a marked contrast with more recent Democratic rhetoric on the subject, including from her own 2020 campaign.

But in the 2006 interview, Klobuchar had a different tone. Though she noted that she was pro-choice, she also touted the endorsement of pro-life Democratic Rep. James Oberstar, one of the top boosters of the original Hyde Amendment, in audio archived by Minnesota Public Radio.

"There are plenty of pro-life Democrats and I'm pleased to have the support of Congressman Oberstar and others," she said. "And we need to talk about reducing the number of abortions and making them safe, but making them rare. And there is common ground on encouraging adoption, reducing abortions."

The Hyde Amendment -- a ban on government funding for abortions -- has become taboo among modern-day Democrats. Last year, longtime Hyde Amendment supporter and 2020 presidential candidate Joe Biden was forced to change his position on the issue after significant pressure from the left wing of his party. There are some Democrats who think Klobuchar is too moderate, too.

LISTEN TO THE KLOBUCHAR COMMENTS HERE:

A Klobuchar campaign spokesperson, however, defended what is a long pro-choice record for the senator.

"Senator Klobuchar has been unwavering in her support of a woman’s right to choose," the spokesperson told Fox News. "It’s why she’s earned 100% lifetime ratings from both Planned Parenthood Action Fund and NARAL and had the support of national pro-choice organizations in every Senate campaign she’s run."

Klobuchar has supported legislation in recent years to overturn the Hyde Amendment, according to The Hill, although she has voted for larger packages that included the amendment, like almost all senators.

The newly unearthed audio underscores the shift in mainstream Democratic rhetoric on abortion.

"Amy Klobuchar has gone out of her way to show that she's not a progressive champion her entire career," a rival campaign told Fox News in a statement, in reference to the 2006 comments.

While Klobuchar was pro-choice in 2006 and is pro-choice in 2020 -- the same can be said for almost all Democratic politicians -- her language on the topic is different today. In November, the New York Times asked every Democratic presidential candidate whether, "abortion should be 'safe, legal and rare.'" It reported that every major candidate, including Klobuchar, dodged the question or would not agree that abortion should be rare.

Her campaign website devotes only a few lines to the issue, calling red-state laws effectively banning abortion "dangerous" and vowing to stand up for women's "health and lives."

The tensions in the party over abortion flared over the weekend, during former South Bend, Ind., Mayor Pete Buttigieg's exchange with a pro-life Democrat in the middle of a Fox News town hall on Sunday.

A pro-life Democrat named Kristen Day asked Buttigieg whether he wanted the support of "people like me" and pressed Buttigieg over whether he would support a change in the Democrats' platform to emphasize that it is a "big tent" party and welcomes pro-life members. He would not commit to such a move.

"I'm not going to try to earn your vote by tricking you. I am pro-choice, and I believe that a woman ought to be able to make that decision," Buttigieg said to applause from the rest of the audience. "I support the position of my party -- that this kind of medical care needs to be available to everyone, and I support the Roe v. Wade framework that holds that early in pregnancy there are very few restrictions and late in pregnancy there are very few exceptions."