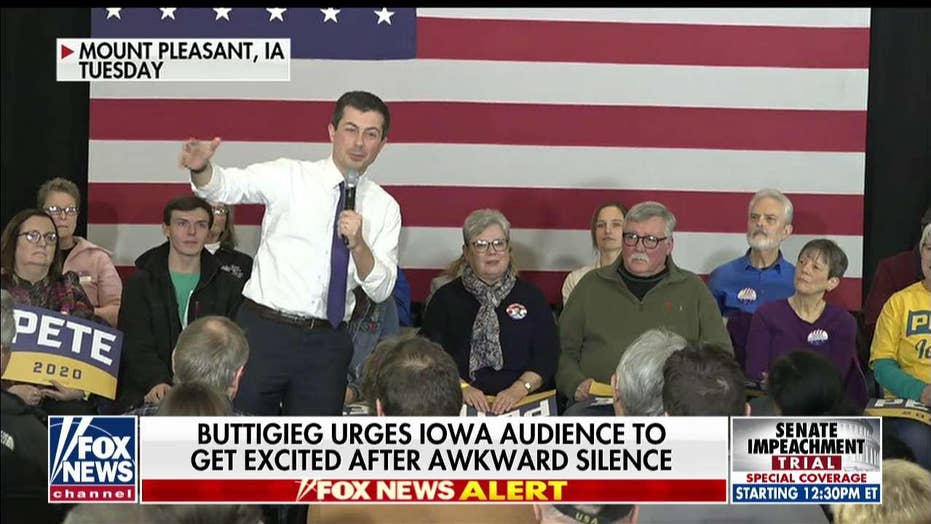 Democratic presidential candidate Pete Buttigieg is in South Carolina Thursday, as he hopes to court black voters in the state that holds the first southern contest in the race for the White House.

The former South Bend, Ind., mayor teams up in the evening with Lenard McKelvey, better known as Charlamagne tha God, co-host of the popular nationally syndicated morning radio show "The Breakfast Club," which has become a must-stop this cycle. The two will hold a community conversation on criminal justice reform in Moncks Corner, South Carolina, McKelvey’s hometown.

Buttigieg, who was on the "Breakfast Club" in September, will sit down earlier in the late afternoon with attorney, business owner and CNN commentator Angela Rye at historically black college Claflin University in Orangeburg.

Buttigieg’s struggles to resonate with black voters - who make a majority of the electorate in South Carolina’s Democratic presidential primary – have been well documented in the media.

A new poll indicates that Sen. Bernie Sanders of Vermont is surging in New Hampshire with less than three weeks to go until the state holds the first primary in the presidential nominating calendar.

The independent and populist lawmaker who’s making his second straight bid for the Democratic presidential nomination stands at 29 percent support among likely Democratic primary voters in the Granite State, according to a MassINC Polling Group survey for WBUR that was released on Thursday. Sanders has nearly doubled his support from the previous WBUR poll conducted in December, when he stood at 15 percent.

The new poll widely varies with a survey released Tuesday by Suffolk University for the Boston Globe. That poll indicates a much closer contest in New Hampshire, with Sanders at 16 percent, Biden at 15 percent, Buttigieg at 12 percent, and Warren at 10 percent.

With a week and a half to go until the Iowa caucuses, former Democratic presidential candidate Marianne Williamson says she’s supporting tech entrepreneur Andrew Yang in the contest that kicks off the presidential nominating calendar.

But the best-selling spiritual author made it clear that she’s not officially “endorsing anyone” in the 2020 Democratic presidential nomination race at this time and is just supporting Yang through Iowa’s Feb. 3 caucuses.

Williamson told Fox News’ Alexandra Rego that she will appear with Yang in the first caucus state "because I know the institutional obstructions to his candidacy and I want to see him continue in the race past Iowa."

And on Instagram, she highlighted that "Andrew’s personality is like a tuning fork realigning us with something we need to retrieve, taking us back to a more innocent time, making us remember to chuckle."

Fox News’ Tara Prindiville reports that actress Constance Wu, one of the stars of the 2018 hit film "Crazy Rich Asians," is one of more than 100 prominent Asian Americans and Pacific Islanders who endorsed Sen. Elizabeth Warren of Massachusetts on Thursday. Others on the list include award-winning author Celeste Ng; attorney Rabia Chaudry, the author of “Adnan's Story: The Search for Truth and Justice After 'Serial;’” and Ellen Pao, former CEO of Reddit.

The group explained in a statement that they “agree unreservedly with their assessment and assertion that Senator Warren’s experience, policies and character — and her support of broad inclusion, her profound empathy and her openness to input and change — are unique among the 2020 candidates.”

From the surf to the slopes

Rep. Tulsi Gabbard of Hawaii appeared to make history on New Year’s Day as the first presidential candidate to go surfing in the waves along New Hampshire’s seacoast.

Now, the Hawaii National Guard officer and Iraq War veteran is taking off the wet suit and hitting the slopes.

Gabbard’s presidential campaign alerted on Thursday that the congresswoman will snowboard with supporters next Tuesday at Cranmore Mountain in North Conway, New Hampshire. The candidate will hold a town hall with voters in the ski area’s lodge after taking her last run on the slopes.

Gabbard has spent much of her time in recent months campaigning in New Hampshire and has rented a home in the state through the Feb. 11 primary.