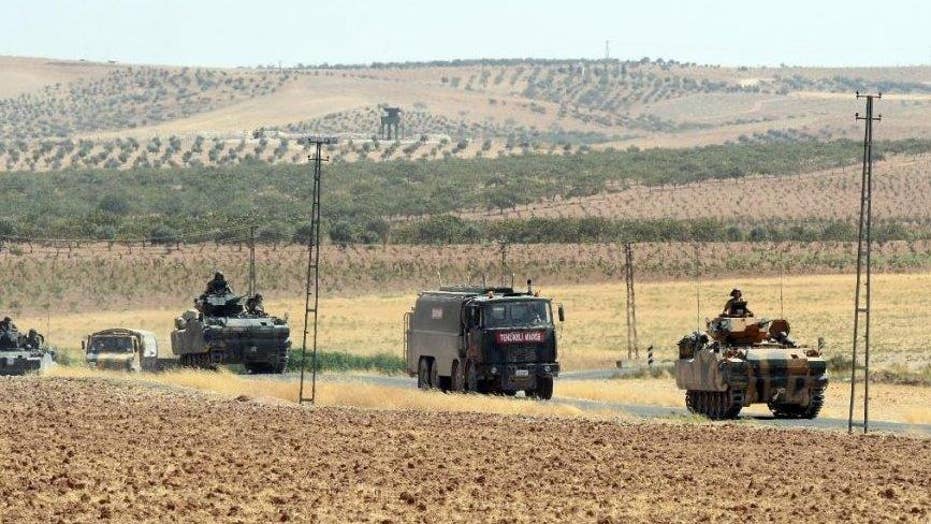 Should US, NATO develop plans to move bases out of Turkey?

A warning from John Hannah, senior counselor at the Foundation for the Defense of Democracies

Defense Secretary Ash Carter called on U.S.-supported allies Turkey and Syrian Kurdish forces Monday to “not fight one another," after a series of clashes erupted in northern Syria over the weekend.

Carter called on Turkish forces not to head south of the Syrian border town of Jarabulus following a successful operation to rid the town of ISIS fighters.  Turkey has since expanded it's operation away from ISIS by shelling US-backed Syrian Kurdish fighters known as the YPG, a key ally against the Islamic State.

Carter called for Turkey to “stay focused” on ISIS and not the Kurdish forces.  This spring, 250 U.S. special operations forces embedded with the Kurdish YPG to help them lead a ground assault against ISIS in Syria.

The Kurds scored a recent victory over ISIS in Manbij, a logistics hub for foreign fighters 20 miles south of the Turkish-Syrian border.

Leading the operation were US-backed Syrian Democratic Forces consisting of Kurdish fighters including the YPG, but also some Arab fighters.

Following the battle, which took place west of the Euphrates River in Syria, Vice President Joe Biden joined in calls from the Turkish government for the Kurds to move their forces east of the river to more traditional Kurdish territory.

Underlying how complex the situation has become, Carter mixed up the name of the Syrian Democratic Forces, calling them the “Syrian Defense Force.”

When asked by a reporter if the Kurds were withdrawing east of the Euphrates, Carter replied, “they are doing that.”

Carter said the Chairman of the Joint Chiefs had called his Turkish counterpart Sunday, highlighting attempts by the US to de-escalation the fighting in the region as fighting continues between two US supported forces in Syria.

Carter said he would be meeting with his Turkish counterpart when he travels to Europe next week.

Carter answered questions in the Pentagon alongside his counterpart from India, Minister of Defense Manohar Parrikar.

The two defense chiefs announced a new “bilateral logistics exchange memorandum,” which both explained was not a “basing agreement,” in a sign of growing cooperation between India and the United States amid a rising threat from China in the region.

Secretary of State John Kerry arrives in New Delhi on Tuesday for a two-day visit.

Carter said it was the sixth time he had met with his counterpart from India, the most of any counterpart.

U.S.-India is destined to be the “defining partnership” of the 21st century, said Carter.