White House officials and top senators are preparing an immigration bill for January aimed at resolving the legal status of so-called "Dreamers."

The plan comes after President Donald Trump rescinded the Obama-era DACA (Deferred Action for Childhood Arrivals) program in September. DACA offered a deportation reprieve to illegal immigrants who came to the U.S. as children. 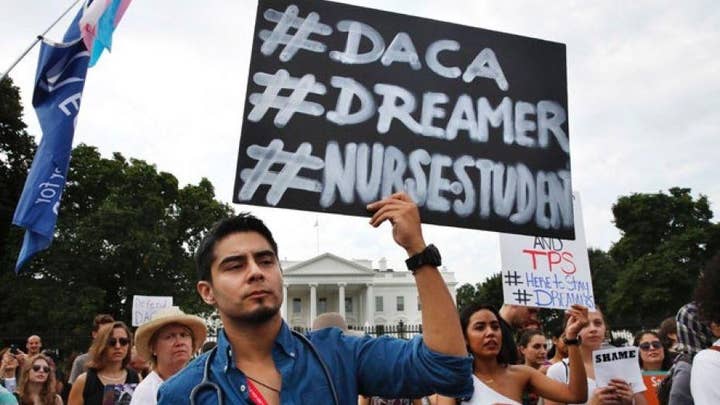 "Dreamers" refers to participants in the DACA program. The name derives from the DREAM (Development, Relief and Education for Alien Minors) Act, a federal proposal that offered protections similar to DACA but was not approved by Congress.

On Tuesday, White House chief of staff John Kelly met with nearly a dozen senators to discuss how much more of the U.S.-Mexico border Trump wants fenced in exchange for a deal on DACA, Politico reported.

Kelly reportedly said the administration will also present a list of border security and other policy measures as part of a broader immigration deal.

“We couldn’t finish this product, this bill, until we knew where the administration was,” U.S. Sen. Jeff Flake, R-Ariz., told the Politico after Tuesday's meeting. “And that’s why this meeting was so important.”

Both the administration and congressional Republicans insist that any deal on DACA would have to be paired with immigration measures. Democrats are broadly willing to compromise as long as the suggestions are not too hardline.

But the deal will likely have to wait until next year, despite pressure and even hunger strikes from progressive activists. U.S. Sen. Bernie Sanders’ former spokeswoman, Erika Andiola, and several other Dreamers were reportedly arrested after staging a sit-in at Senate Minority Leader Chuck Schumer’s office.

"Our belief is that if this matter is not resolved this week — and it's not likely to be resolved — that come the omnibus and the caps, that we have another chance to finally come up with a bipartisan package of things to include" by mid-January, U.S. Sen. Dick Durbin, D-Ill., told Politico. "The closer we get (to the March deadline), the more nervous I get, not to mention the way these young people feel. I'm sorry that it's taken this long."

Flake said Senate Majority Leader Mitch McConnell, R-Ky., will hold a vote by mid-January, just before the next possible deadline to fund the government.

Democrats suggested that they will not raise the immigration issue in December and risk a government shutdown, although several leading progressive voices in Congress, including U.S. Sen. Elizabeth Warren, D-Mass., and U.S. Sen. Kamala Harris, D-Calif., signaled they would withhold their votes for any funding measure that does not address the issue of DACA.