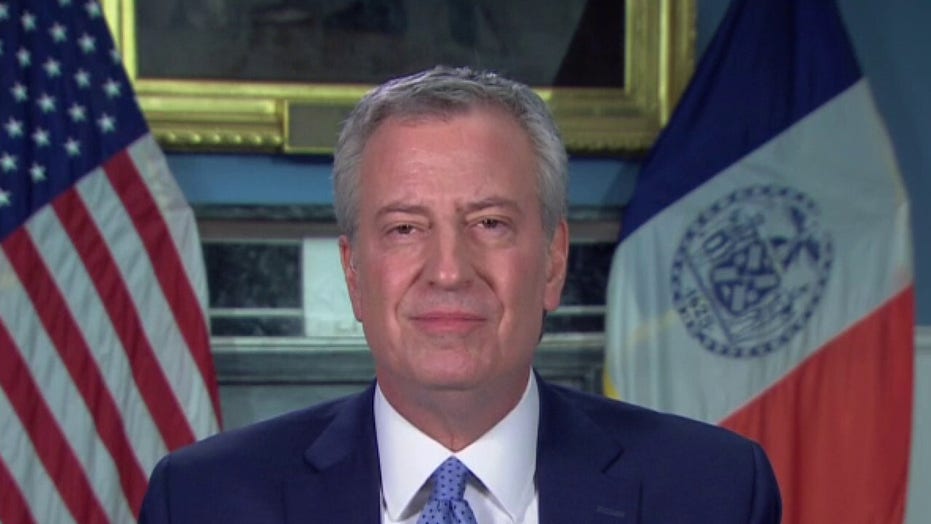 The COVID-19 pandemic will be with us for many, many months, says New York City Mayor Bill de Blasio.

With the Big Apple now the epicenter of the coronavirus outbreak in the United States, New York City Mayor Bill de Blasio said Sunday that critics should not be "focusing" on "anything looking back on any level of government right now" -- including his previous statements urging his constituents to go about their lives and not worry about the virus.

On Jan. 24, de Blasio said New Yorkers should "continue living as you have"; on Feb. 14 he said, "this should not stop you from going about your life ... from going out to Chinatown and going out to eat"; and on March 13, he reiterated "we wanted people to go on about their lives."

In an especially ill-advised March 2 tweet, de Blasio wrote: “Since I’m encouraging New Yorkers to go on with your lives + get out on the town despite Coronavirus, I thought I would offer some suggestions. Here’s the first: thru Thurs 3/5 go see “The Traitor” @FilmLinc. If “The Wire” was a true story + set in Italy, it would be this film.”

The Trump administration restricted travel from China on Jan. 31 in response to the mounting coronavirus threat -- a move many Democrats and media outlets characterized as irresponsible and unnecessary.

Confronted with his previous soundbites on CNN's "State of the Union," de Blasio initially downplayed the comments before ultimately acknowledging that the questions were "fair."

"This is just about how we save lives going forward. Everyone was working with the information we had, and trying of course to avoid panic," de Blasio began. "The bottom line is none of us have time to look backwards. I'm trying to figure out how we get through next Sunday, and what we do the week after that."

When anchor Jake Tapper reminded the mayor that he has harshly criticized President Trump's response to the crisis, de Blasio insisted that he had argued in real-time that coronavirus testing was insufficient.

At the same time, de Blasio continued: "There's no time to go back over that; there's only time to focus on getting through the next week and the week after that. You can ask all the questions you want. They're fair. But I think the time to deal with these questions is after this war is over. Because literally here in New York City, it feels like a wartime environment."

More than most other officials in de Blasio's administration, New York City Health Commissioner Oxiris Barbot was likely to face those questions. Barbot remarked on Feb. 2: "There is no reason not to take the subway, not to take the bus, not to go out to your favorite restaurant, and certainly not to miss the parade next Sunday.”

Then, on Feb. 7: “We’re telling New Yorkers, go about your lives, take the subway, go out, enjoy life."

A medical worker sticks her head outside a COVID-19 testing tent set up outside Elmhurst Hospital Center in New York, Saturday, March 28, 2020. The hospital is caring for a high number of coronavirus patients in the city, and New York leads the nation in the number of cases, according to Johns Hopkins University, which is keeping a running tally. (AP Photo/Kathy Willens)

And on Jan. 26, Barbot reassuringly told constituents, “We are encouraging New Yorkers to go about their everyday lives and suggest practicing everyday precautions that we do through the flu season.”

De Blasio's interview with CNN came a day after President Trump surprised governors of New York and neighboring New Jersey and Connecticut by saying Saturday that he might impose a quarantine on their residents, before tweeting later in the day that a travel advisory was the way to go.

All 50 U.S. states have reported some cases of the virus that causes COVID-19, but New York has the most, with over 52,000 positive tests for the illness and more than 700 deaths. About 7,300 people were in New York hospitals Saturday, including about 1,800 in intensive care.

Emergency room nurses gather flowers donated to the hospital staff on a ramp outside Elmhurst Hospital Center's ER after a neighbor dropped them off, Saturday, March 28, 2020. The Queens borough hospital has been heavily taxed treating coronavirus patients in recent weeks. New York leads the nation in the number of cases, according to Johns Hopkins University, which is keeping a running tally. (AP Photo/Kathy Willens)

Meanwhile, Cuomo said he was delaying the state's presidential primary from April 28 to June 23, when the state plans to hold legislative congressional and local party primaries.

“I don’t think it’s wise to be bringing people to one location to vote" on the April date, he said.

New York joins over a dozen states that have delayed some elections. A smaller group including Ohio, Georgia, Louisiana, Connecticut, Maryland, Rhode Island, Indiana and Kentucky have also postponed their presidential primaries.