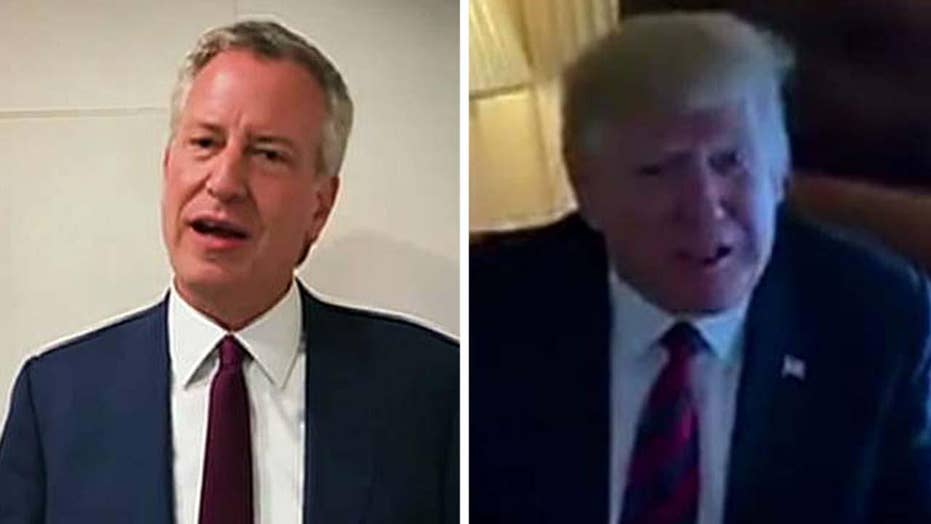 It's a time-honored tradition, and the growing crop of 2020 is proving itself no exception to the rule.

A number of Democratic contenders to enter the race had previously ruled out running for the Oval Office, with some even doing so while trying to win election to lower offices.

New York City Mayor Bill de Blasio became the latest Democrat to do so when he officially launched his candidacy on Thursday, making him the sixth 2020 hopeful this election cycle to be running for president after denying he had any intention.

During a Democratic mayoral primary debate in 2017, de Blasio was asked to make a pledge that he would serve all four years of his next term as the NYC mayor and was not going to run in 2020.

"I'm looking at that camera right there," de Blasio pointed to the camera, "to my fellow New Yorkers, I'm running for one thing and one thing only- for re-election as mayor of New York City. It is my honor to be mayor of this great city. I want to serve for four more years."

De Blasio, of course, is in good company.

Three senators, Elizabeth Warren, D-Mass, Amy Klobuchar, D-Minn, and Kirsten Gillibrand, D-NY, were all re-elected in the 2018 midterm elections. All three of them, however, previously expressed they were simply running to maintain their level of office.

In March 2018, Warren was asked on "Meet The Press" if she would pledge to serve a full six-year term.

"I don't mean to pick on you about this, but do you know how many people have said that over the years?" NBC News' Chuck Todd later responded after pointing out she didn't actually pledge to serve her full term. "Two years before and then, of course, ended up running for president? Do you see why a lot of people aren't going to believe that answer?"

Warren doubled down, saying she wasn't "running" for president, which Todd pointed out was "present tense." She did pledge to do so a month later when asked by reporters.

During an August 2018 debate, Klobuchar attempted to dispell the rumors that she was going to run against President Trump in 2020 by pledging she would finish her term.

"Of course I will," Klobuchar said. "I think my track record shows that. I love working in the Senate. I love representing Minnesota."

Gillibrand was also pressed about a presidential run during a debate in October 2018.

"I will serve my six-year term," Gillibrand declared.

"Honestly, I don't believe that," her GOP opponent Chele Farley shot back.

Former congressman Beto O'Rourke insisted in September 2018 that he would remain in the Senate if he beat the incumbent Sen. Ted Cruz, R-Tex, and dismissed the notion that he would be former Vice President Joe Biden's future running mate.

"I asked you to put me into this position of public trust and I could not ask you in good conscience if I didn't intend to serve every single day of the next six years trying to make this state in this country better," O'Rourke said. "You have my commitment tonight. I will not run for any other office in those six years. It's 100 percent for Texas as your U.S. senator.”

Seeking his re-election in the House of Representatives, Rep. Seth Moulton, D-Mass, appeared to have closed the door on a 2020 bid last October.

"I'm not running for president, period," Moulton told McClatchy. "I just want to serve the country the best way I can. Right now, that’s as the representative of the Sixth District of Massachusetts."

Moulton did leave open the possibility of a change of plans ahead of 2020.