What fallout will Gov. Cuomo face from cover-up investigation?

The Cuomo administration’s controversial directive for nursing homes to accept COVID-19 patients amid the pandemic likely did lead to a spike in resident deaths, an analysis of its own data revealed Thursday.

The study by the nonprofit Empire Center for Public Policy tied "several hundred and possibly more than 1,000" fatalities to the since-rescinded March 25, 2020, order that critics have blamed for spreading the coronavirus among vulnerable seniors.

The analysis also suggests the controversial mandate is "associated with" more than one in six of 5,780 nursing deaths statewide between late March and early May.

"The findings contradict a central conclusion of the state Department of Health’s July 6 report on coronavirus in nursing homes, which said, among other things: ‘Admission policies were not a significant factor in nursing home fatalities,’ and ‘the data do not show a consistent relationship between admissions and increased mortality,’ " according to a draft report prepared by the Empire Center.

The DOH report primarily blamed the spread of COVID-19 in nursing homes on infected but asymp­tomatic staffers and visitors, and has repeatedly been cited by Gov. Andrew Cuomo to deny any responsibility — even though he himself had warned on March 29, "Coronavirus in a nursing home is like fire in dry grass."

The Empire Center’s report is based on data that the DOH released to the watchdog group and The Post in response to requests under the state Freedom of Information Law.

The Albany-based think tank said it arrived at its conclusions by comparing the death rates at facilities that admitted COVID-19 patients discharged from hospitals to the rates at others that didn’t, then crunching the numbers to "a statistical confidence level of 99 percent."

The study found that nursing homes outside New York City and its suburbs bore brunt of the order, with each one that accepted COVID-19 patients averaging 9.3 more deaths than those that didn’t.

But in and around the city, the difference wasn’t statistically significant, most likely because the coronavirus was so widespread there during the early days of the pandemic.

The report concludes that the March 25 directive "was not the sole or primary cause of the heavy death toll in nursing homes." 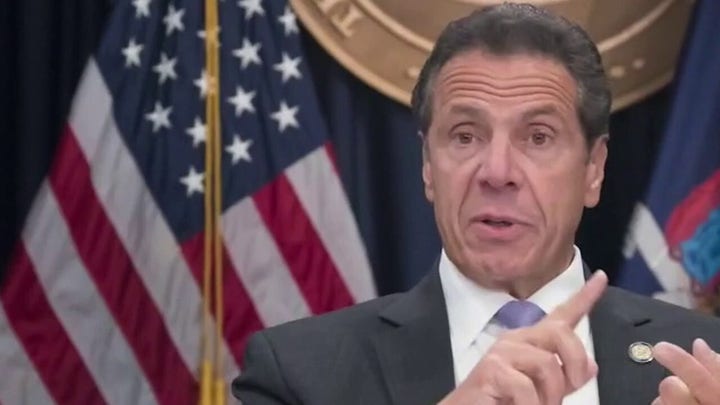 But Bill Hammond, the center’s senior fellow for health policy and author of the report, said the policy — which Cuomo reversed on May 10 — "clearly did make some difference and it made a bad situation worse."

Hammond also said the data he reviewed "raises more questions about the credibility of the Health Department’s analysis" in its July report.

"Their methodology was questionable — we know they used partial data for crucial variables, deaths and admissions," he said.

"It’s not clear that they looked for, let alone reported, the kind of statistical correlation that we found."

In a prepared statement, Health Commissioner Howard Zucker said the Empire Center’s report was "consistent with the Department of Health’s analysis that found the March 25 guidance was not a driver of COVID infections and fatalities and COVID was introduced to nursing homes primarily through staff and visitors."

Zucker specifically cited a notation in the Empire Center report about how COVID-19 "‘wreaked havoc in nursing homes across the country and around the world, including in jurisdictions that did not adopt policies similar to the March 25 guidance memo."

The Empire Center’s analysis follows a damning report last month by Attorney General Letitia James, who said the March 25 directive "may have put residents at increased risk of harm in some facilities."

James’ report also estimated that the official DOH tally of resident fatalities — which at the time only included those who actually died in nursing homes — would be more than 50 percent higher if it included deaths in hospitals.

That assertion prompted Zucker to finally release figures that pushed the death toll from less than 9,000 to nearly 13,000 statewide.

Cuomo’s handling of COVID-19 in nursing homes has also sparked renewed outrage since The Post last week revealed that top aide Melissa DeRosa privately admitted that his administration hid the total number of nursing home deaths from lawmakers and the public amid a Department of Justice probe.

The FBI and the Brooklyn US Attorney’s Office launched a new probe of Cuomo’s coronavirus task force and its handling of the virus in nursing homes in response to The Post’s report, the New York Law Journal reported Thursday.