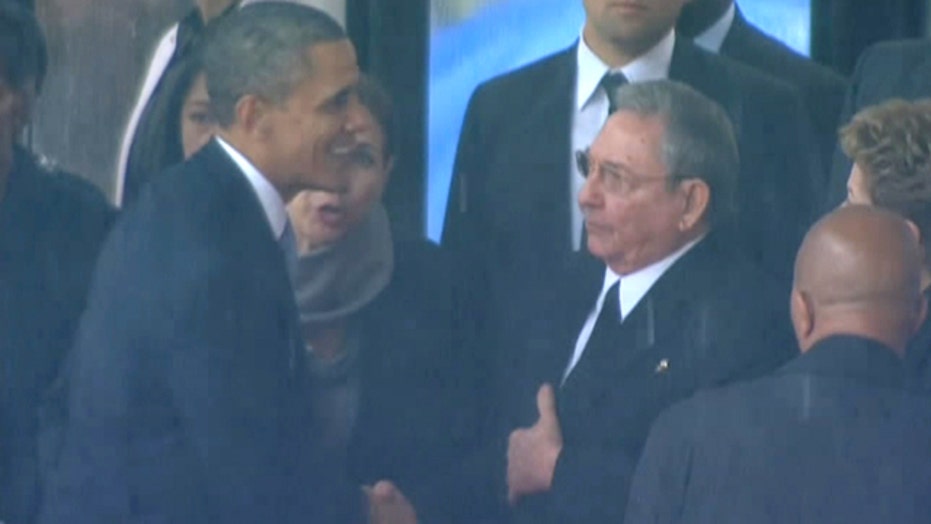 Cuban-American lawmakers voiced disappointment Tuesday over President Obama shaking the hand of Raul Castro during the memorial service for Nelson Mandela, calling it a "propaganda coup" for the Cuban government.

"It is nauseating," Rep. Ileana Ros-Lehtinen, R-Fla., who fled Cuba with her family when she was a child, told Fox News.

Speaking later at a hearing with Secretary of State John Kerry, the congresswoman held up photos of the handshake and said political dissidents would be "disheartened" by them.

"Sometimes a handshake is just a handshake, but when the leader of the free world shakes the bloody hand of a ruthless dictator like Raul Castro, it becomes a propaganda coup for the tyrant," she said.

Sen. Marco Rubio, R-Fla., also released a statement saying: "If the president was going to shake his hand, he should have asked him about those basic freedoms Mandela was associated with that are denied in Cuba."

Ted Cruz, the only senator in the congressional delegation to Mandela's memorial, walked out of the service in South Africa when Castro spoke.

"Just as Mandela was released after 27 years in prison, Castro should finally release his political prisoners; he should hold free elections, and once and for all set the Cuban people free," the Texas senator's spokesman Sean Rushton said late Tuesday.

Distrust of the Castro government runs deep in the Cuban-American community, particularly in Florida where many refugees still live.

Obama's brief encounter with Castro, though -- unlike the historic phone call earlier this year between Obama and Iran's new president, Hassan Rouhani -- was described as spontaneous.

An administration official said "this wasn't a pre-planned encounter," adding: "Above all else, today is about honoring Nelson Mandela, and that was the president's singular focus at the memorial service."

At the hearing on Tuesday, Kerry said Obama "didn't choose who's" at the Mandela ceremony. Asked by Ros-Lehtinen if Castro is upholding basic human rights, Kerry answered: "No. Absolutely not."

Obama shook Castro's hand as he made his way down a line of dignitaries, including South African President Jacob Zuma and Brazilian President Dilma Rousseff, on his way to deliver an address honoring the late South African leader.

In the speech in Johannesburg, Obama praised Mandela as the "last great liberator of the 20th century."

"He changed laws, but he also changed hearts," Obama said.

Ros-Lehtinen said afterward that Castro should have listened to Obama's message about how some leaders praise Mandela without respecting human rights. "I think that was a message to Raul Castro," she said, calling him a "thug."

The handshake came amid a memorial service that lauded Mandela's spirit of reconciliation. It's unclear whether more will come of the gesture, as efforts by the Obama administration to thaw relations between Cuba and the U.S. have been slow-going.

The U.S. government in 2011 eased the embargo on the island by allowing some Americans to travel there. But the U.S. freeze on Cuba, dating back to when Fidel Castro took power, largely has remained in place - and Cuba's human rights record, particularly its intolerance of political dissent, continues to draw the scorn of rights groups and western governments.