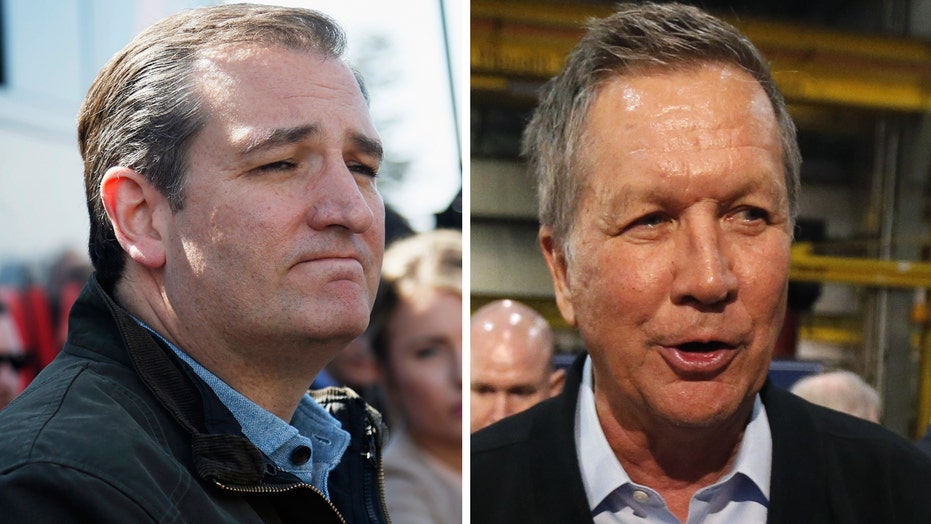 Can a Kasich, Cruz alliance stop Trump? Chris Stirewalt explains the sacrifices each would have to make in just 60 seconds.

Sen. Ted Cruz is making the case that GOP presidential rival John Kasich and his pesky campaign cannot win the party nomination unless he has top showings in eight states -- an argument that could help Cruz in the upcoming Wisconsin primary and the GOP White House race.

Cruz in recent interviews has repeatedly cited a Republican National Committee rule that states candidates can be nominated only if they've won the total delegate majority in eight or more states, as reported first by The Washington Post.

The Texas senator is trailing front-runner Donald Trump by 273 delegates with about half of the country’s caucus-primary contests remaining.

However, Cruz now leads Trump in the Tuesday’s Wisconsin primary, according to most polls. But Kasich, the governor of Ohio who is running a distant third in the GOP White House, could win enough votes to decide the primary and the entire nominating process.

Kasich has won only one contest, his home-state of Ohio, and he has finished in second-place or tied for second in five others.

The RNC wrote the rule in 2012 after then-Texas Rep. Ron Paul had nearly enough wins to at least complicate the nomination process for clear front-runner Mitt Romney.

Kasich is now considered the only remaining candidate that the Republican establishment could try to nominate in a contested convention.

Trump and Cruz have in part made their campaigns an indictment of insider Washington and are being called un-electable in a general-election race against Democratic front-runner Hillary Clinton.

Hewitt was following up on Cruz’s comments on a CNN “Town Hall” in which he said Kasich being on the ballot was “against the rules” and “If no one has 1,237 (delegates), you have to have won at least eight states."

Rove acknowledge the rule was indeed written just before the 2012 convention to keep Paul, who has just roughly 5 percent of the vote, from getting a “full blown” nomination process.

He said the rule states candidates must have that majority of delegates to have an official nominating speech and seconding speeches. However, they can receive votes on the first ballot from the “pledged” delegates they won in caucuses and primaries.

Republican officials and others have also reportedly said new rules could be written before this year’s convention in July.