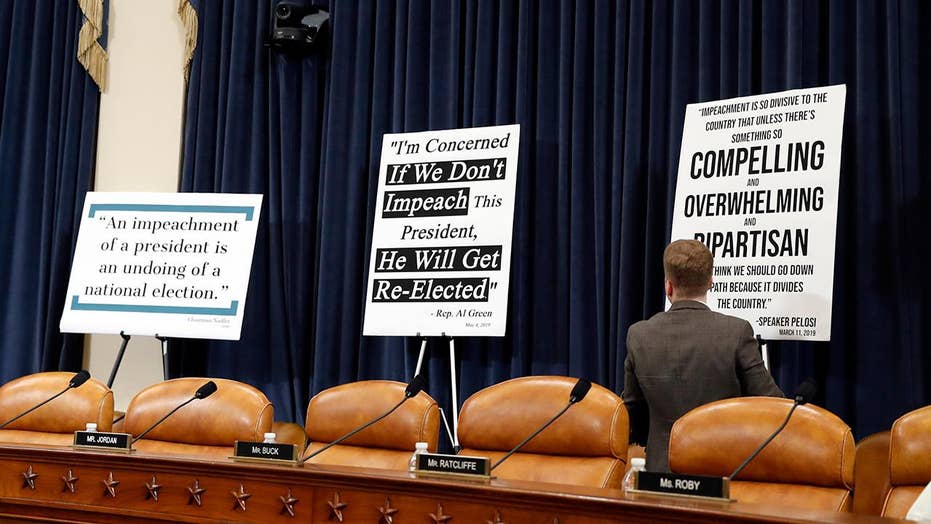 CONSTITUTIONAL SCHOLARS CLASH OVER IMPEACHMENT
Fox News: “Legal scholars sparred during Wednesday's impeachment inquiry hearing about whether President Trump has committed impeachable offenses -- with witnesses called by the Democrats insisting Trump engaged in high crimes and misdemeanors and the sole Republican witness arguing the case is ‘woefully inadequate’ and ‘dangerous.’ The House Judiciary Committee hearing set the stage for the next phase of the Democratic-led House impeachment inquiry, with legal professors from top law schools… Stanford Law professor Pamela Karlan, Harvard Law professor and Bloomberg columnist Noah Feldman and University of North Carolina Law professor Michael Gerhardt … did not hesitate on Wednesday to call Trump’s actions impeachable. … But Jonathan Turley, a law professor for George Washington University Law School and the sole witness called by Republicans on the Judiciary Committee for the hearing, argued the opposite.”

Giuliani back at it in Ukraine - NYT: “Even as Democrats intensified their scrutiny this week of Rudolph W. Giuliani’s role in the pressure campaign against the Ukrainian government that is at the heart of the impeachment inquiry, Mr. Giuliani has been in Europe continuing his efforts to shift the focus to purported wrongdoing by President Trump’s political rivals. Mr. Giuliani, the president’s personal lawyer, met in Budapest on Tuesday with a former Ukrainian prosecutor, Yuriy Lutsenko, who has become a key figure in the impeachment inquiry. He then traveled to Kyiv on Wednesday seeking to meet with other former Ukrainian prosecutors whose claims have been embraced by Republicans, including Viktor Shokin and Kostiantyn H. Kulyk, according to people familiar with the effort. The former prosecutors, who have faced allegations of corruption, all played some role in promoting claims about former Vice President Joseph R. Biden Jr., a former United States ambassador to Ukraine and Ukrainians who disseminated damaging information about Mr. Trump’s campaign chairman, Paul Manafort, in 2016.”

THE RULEBOOK: JUST LOOK AROUND
“These are not vague inferences drawn from supposed or speculative defects in a Constitution, the whole power of which is lodged in the hands of a people, or their representatives and delegates, but they are solid conclusions, drawn from the natural and necessary progress of human affairs.” – Alexander Hamilton, Federalist No. 8

TIME OUT: ‘I CALL THAT BOLD TALK FOR A ONE-EYED FAT MAN’
Garden&Gun: “‘People do not give it credence that a fourteen-year-old girl could leave home and go off in the wintertime to avenge her father’s blood,’ says the narrator, Mattie Ross, in the first lines of True Grit, the 1968 Western novel by Charles Portis and the basis for two heralded films of the same name. The tale follows Mattie and her cowboy sidekick, Rooster Cogburn, on a late-1800s journey of justice through Arkansas and the territory that would become Oklahoma. A recently opened exhibition, Two Grits—A Peek behind the Eyepatch, at the National Cowboy & Western Heritage Museum in Oklahoma City, marks the fiftieth anniversary of the 1969 film, starring Kim Darby and John Wayne, and compares it with the 2010 Coen brothers remake with Hailee Steinfeld and Jeff Bridges playing the lead roles. … While the 1960s version modernized Mattie’s speech, for example, the later adaptation used more of Portis’s original scripture-laced dialogue.”

DEMS’ ALL-WHITE CONTENDERS DISPLEASE SOCIAL JUSTICE SET
McClatchy: “Democrats lost arguably their most prominent presidential candidate of color Tuesday when Kamala Harris suddenly ended her campaign, leaving the party’s upper echelon of contenders — including all of those currently qualified for the next debate — entirely white. It’s a stark new reality that’s left many leading progressive activists disappointed, upset and concerned that the 2020 field is not reflecting an increasingly diverse Democratic base, harming the party’s chances to defeat President Donald Trump in next year’s general election. ‘How can we be the party of social justice, how can we be the party of black voters, how can we be the party of change, if we are not embracing the shifts happening in our electorate and demographics?’ said Jessica Morales Rocketto, executive director of Care in Action, a nonprofit group that advocates for domestic workers.”

Buttigieg gets nod from Dem vets group - NYT: “VoteVets, the political action committee that backs liberal veterans running for office, has endorsed Pete Buttigieg for president, the first major organization to support him. The endorsement brings Mr. Buttigieg, the mayor of South Bend, Ind., and a former Navy officer who served in Afghanistan, new defenders in a 2020 Democratic presidential contest that has seen better known candidates drop out as polling shows early-state voters coalescing around the four leading candidates. Jon Soltz, the co-founder and chairman of VoteVets, said that other campaigns weren’t taking on Mr. Buttigieg directly but that they were using opposition research to try and ‘hold back his momentum.’”

Whatever they say, Biden still thinks he’s a baller - Politico: “Joe Biden’s feeling awfully confident these days. The former vice president thinks he doesn't need Barack Obama to win the primary. He seemed to mock the ideas that there's enthusiasm for Elizabeth Warren or that Pete Buttigieg came up with his own plans. And he professed to be untroubled by the possibility of Mike Bloomberg dropping $1 billion to beat him out for the nomination. Biden is dripping with confidence as he tours Iowa two months before the state’s caucuses, after endless predictions his candidacy would have crumbled by now. Instead, the candidates who pitched themselves as Biden alternatives are the ones dropping.”

KEMP BUCKS TRUMP, SNUBS COLLINS FOR SENATE PICK
Fox News: “Georgia Gov. Brian Kemp appointed businesswoman Kelly Loeffler to the U.S. Senate on Wednesday to succeed the retiring Johnny Isakson, who is leaving office at the end of the year due to health issues. Kemp's decision came despite intense criticism from conservative allies of President Trump who wanted Kemp to appoint Rep. Doug Collins, one of Trump’s staunchest defenders in Congress. Loeffler, a co-owner of the Atlanta Dream professional woman’s basketball team, on Wednesday attempted to assuage the concerns of those who were against the political outsider. … Collins, the ranking member of the House Judiciary Committee, delivered an impassioned statement against impeaching Trump during a hearing Wednesday morning. He has publicly left open the door to challenging Loeffler for the seat, which is up for reelection in November 2020, despite Senate Majority Leader Mitch McConnell, R-Ky., expressing support for Loeffler.”

Pompeo reportedly nuzzling Republican megadonors for Senate run - McClatchy: “Secretary of State Mike Pompeo has reached out to Sheldon Adelson, the Republican Party’s largest donor, in recent weeks to ‘gauge interest’ in his potential run for an open Senate seat in Kansas next year, three sources familiar with the matter told McClatchy. It is the latest evidence of Pompeo’s outreach campaign to rally donor support around a potential Senate bid, following similar conversations with Charles Koch, a Kansas resident, as well as donors affiliated with the American Israel Public Affairs Committee. … Sources close to Adelson and Koch told McClatchy that both megadonors were receptive to Pompeo’s overtures, but that no concrete commitments have been made.”

House GOP drops recruit after he calls for congresswoman’s hanging - Tampa Bay Times: “National Republicans are distancing themselves from George Buck after the Florida congressional candidate suggested hanging U.S. Rep. Ilhan Omar in a fundraising email. House Minority Leader Kevin McCarthy decided to remove Buck as one of the party’s ‘Young Guns,’ a Republican recruitment program that trains and supports candidates in competitive House races. U.S. Rep. Tom Emmer, the chairman of the National Republican Congressional Committee, agreed with the decision, a spokeswoman for the committee said Wednesday. The decision comes a day after the Tampa Bay Times reported that Buck’s campaign had sent a fundraising email calling for Omar’s execution. The email was sent last week in response to unsupported accusations that Omar, a Somali-born Democrat representing Minnesota, secretly works for the country of Qatar. ‘We should hang these traitors where they stand,’ the email said.”

AUDIBLE: NOW THERE’S A THOUGHT
“I’m big on bipartisanship. Whether you’re black or white, Republican or Democrat, whatever it might be, find a way to find common ground. Give it a chance to work.” – Sen. Johnny Isakson, R-Ga., said Tuesday during a bipartisan barbecue honoring his departure from the Senate.

FROM THE BLEACHERS
“Chris, a few days ago you listed the NYT as an example of unbiased news reporting.  The ‘Old Gray Lady’ was once the epitome of news journalism, but it appears to many of us that she has slipped a bit in the past two+ decades. What say you?” – Jim Kinney, Hoschton, Ga.

[Ed. note: There are certainly articles and story angles in the NYT’s news section that evince a point of view on the part of writers and editors – probably the same point of view that you’d find in most of their core home-town audience. But, the paper has never been more formidable in my lifetime. It and the WSJ rightly deserve their slots as America’s best newspapers. The depth of reporting, resources and attention to detail are impressive. Good journalism costs a great deal of money and the Times, like the Journal, puts up big bank to get the stories that matter. I’m grateful. As news consumers, we should read with our eyes open, as it were. But that shouldn’t mean that we should be blinkered.]

FLORIDA BABY
WOFL: “A Florida couple shopping for a baby shower gift thought they got a great deal when they found a baby bouncer for only $10 at Goodwill. What they didn’t expect was to find a semi-automatic rifle inside. Veronica Alvarez-Rodriguez said she was attending a baby shower on Sunday, so she stopped by the Goodwill in Valparaiso to pick up a gift. That's where she found a Baby Einstein baby bouncer in an unopened box that appeared to be new. … Alvarez-Rodriguez took the gift to the baby shower where the father-to-be opened the box and said ‘You guys got me a gun,’ the Palm Beach Post reported. Turns out, the baby bouncer box also contained a Mossberg 715T semi-automatic rife with live ammo in it. … Crestview police were called and an officer told them they could keep the gun after checking their ids. On Monday, however, police requested they turn over the rifle while the incident is being investigated.”

AND NOW, A WORD FROM CHARLES…
“Has there ever been a more reluctant superpower than America? Has any great power taken less pleasure in its foreign adventures? I doubt it. … The idea that the world is an arena of unending conflict repels Americans. It means that a superpower's work is never done.” – Charles Krauthammer (1950-2018) writing in Time magazine on Oct. 22, 1990.