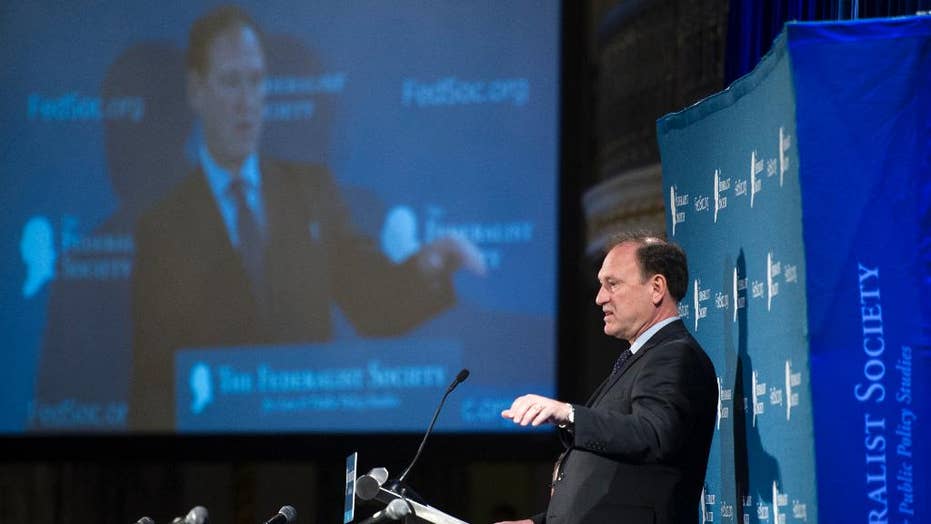 A draft opinion from a federal judicial ethics committee, which was circulated among federal judges this month and first published by the National Review, has some conservative court watchers concerned that the committee is trying to suppress the Federalist Society, a powerful right-leaning lawyers' organization.

A longtime member and volunteer leader of the Federalist Society told Fox News that the opinion "smacks of censorship."

The Committee on Codes of Conduct opinion clarifies that it is "broadly permissible" for federal judges to speak at Federalist Society events -- and events for its left-wing counterpart the American Constitution Society -- but raises concerns that judges' membership in either organization could cause the public to lose faith in that judge's impartiality.

"Official affiliation with either organization could convey to a reasonable person that the affiliated judge endorses the views and particular ideological perspectives advocated by the organization; call into question the affiliated judge’s impartiality on subjects as to which the organization has taken a position; and generally frustrate the public’s trust in the integrity and independence of the judiciary," the opinion states.

That statement isn't sitting well with some conservatives, including Judicial Crisis Network chief counsel and policy director Carrie Severino, who called the opinion part of an "ongoing political campaign to silence the Federalist Society."

The Federalist Society has amassed significantly more power than the liberal ACS, particularly as its co-chairman Leonard Leo has had President Trump's ear on judicial nominations. This is likely part of the reason why its defenders feel it is being targeted by an opinion that mentions both organizations.

But the Committee on Codes of Conduct opinion says it is completely permissible for judges to be members of a third organization, the American Bar Association, which conservatives say is just as, if not more, political than the Federalist Society.

"The way they have written it says judges shouldn't be involved if the group they're involved with takes political positions or legal positions on things," Severino said of the ethics opinion. "What's so strange is that is something that the American Bar Association does a lot. They have lobbyists that advocate for legislation. They do amicus briefs."

While the Federalist Society describes itself as a counterbalance to "orthodox liberal ideology" and a group for "conservatives and libertarians" interested in "reordering priorities within the legal system," it does not take official policy positions or endorse judicial nominees or political candidates.

The ABA, on the other hand, has a mission statement that is completely apolitical: "Our mission is to serve equally our members, our profession and the public by defending liberty and delivering justice as the national representative of the legal profession."

But the ABA's House of Delegates regularly passes resolutions urging "governments to enact legislation" or take other action that is political in nature. Examples from the organization's 2019 midyear meeting include one resolution opposing laws that would allow teachers or other faculty to carry guns in schools and another condemning the government shutdown that began in December 2018 and bled into early 2019.

Additionally, the ACS does advocate for policies, unlike the Federalist Society, making the conservative and libertarian lawyers' group unique in that respect.

The member and volunteer leader of the Federalist Society told Fox News that he is concerned the new guidance "will be used as a tool to bludgeon ... nominees" who have previously been involved with the Federalist Society and that the opinion is "going to have a chilling effect on the willingness of judges to participate in programs" that benefit law students.

The committee defends its decision to treat the ABA differently from the Federalist Society and the ACS by emphasizing the separate type of ABA membership which is available for judges.

"Although not previously addressed, we think it significant that, since 1912, the ABA has maintained a separate membership section for judges, now called the Judicial Division," it says in the draft opinion. "According to the Judicial Division’s Bylaws, 'judicial members of the Division will not be deemed to endorse positions and policies adopted by the ABA that conflict with a judge’s obligation to comply with the ABA Model Code of Judicial Conduct or the Governing Code of Judicial Conduct in the judge’s jurisdiction.'"

The committee adds: "Any individual policy agenda advanced by the ABA’s House of Delegates is ancillary to the ABA’s core, neutral, and appropriate ... objectives."

Fox News has learned that two members of the committee -- the membership of which is not publicly listed -- are Judge Jack McConnell, a district judge in Rhode Island, and Judge Albert Diaz, who is on the Fourth Circuit Court of Appeals.

Judge Ralph Erickson of the Eighth Circuit Court of Appeals, chairman of the Committee on Codes of Conduct, is the only member whose name is publicly available. Erickson did not respond to a request for comment on behalf of the committee. Diaz and McConnell also did not respond to requests for comment sent to their respective offices.

Erickson is a Trump appointee who spoke at a Federalist Society event as recently as October. It is unclear whether or not Erickson, McConnell or Diaz personally endorse the draft opinion; the procedures the committee uses before circulating such opinions are also unclear.