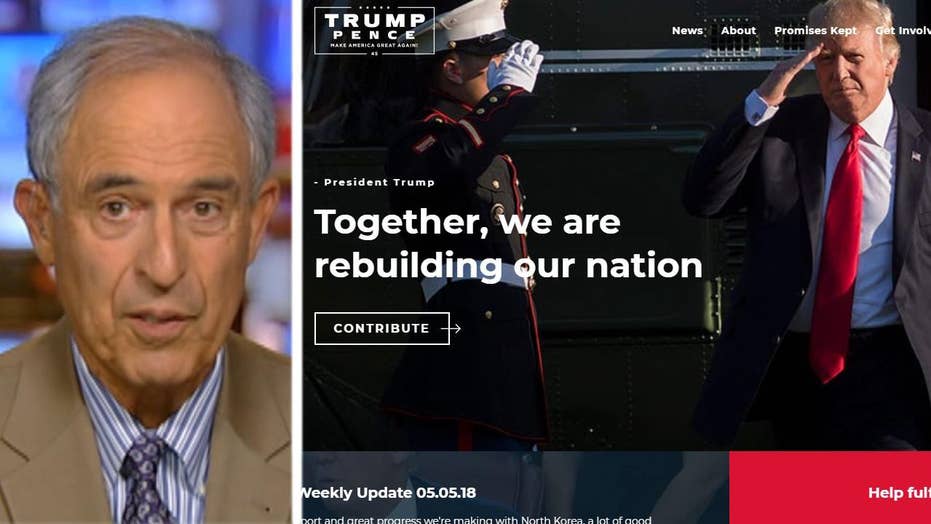 Michael Cohen lawyer Lanny Davis on Wednesday mistakenly promoted a nonexistent website where he said supporters could donate to his client's legal fund -- but the site didn't stay dormant for long.

It now redirects to President Trump campaign website donaldjtrump.com, which urges visitors to contribute to re-elect the president and "Make America Great Again."

"I know that when [Cohen] retained me, as recently as yesterday, he's committed to telling the truth, and we've actually set up a website with the name 'truth' in it, called michaelcohentruth.com," Davis told Fox News' "America's Newsroom" on Wednesday. "And he's looking for help from people who want to give donations to help him tell the truth."

Davis repeated the inaccurate website address later in the interview, saying that Cohen "has gone through a lot, his family has suffered, he's in financial distress -- we've set up a Gofundme site, called michaelcohentruth.com, and we're hoping that people who want him to tell the truth about Donald Trump will contribute to that site."

That website was inactive at the time of Davis' comment early Wednesday, but was snatched up quickly. Publicly available information about the domain name's registration hides the owner of the website through a proxy service, but reveals that the URL was purchased on Wednesday.

Visitors to the website advertised by Michael Cohen's lawyers are instead redirected to donaldjtrump.com. (Trump campaign)

A Trump campaign official denied involvement in a statement to Fox News, saying anyone could have purchased the nonexistent address Davis mentioned and rerouted it to Trump's homepage for as little as $7.

Davis apparently intended to provide a slightly different website address, which as of late afternoon links to a Gofundme page that has raised more than $50,000 for Cohen out of a $500,000 goal.

"Michael decided to put his family and his country first," the Gofundme page says. "Now Michael needs your financial help -- to pay his legal fees. The Michael Cohen Truth Fund is a transparent trust account, with all donations going to help Michael Cohen and his family as he goes forward on his journey to tell the truth about Donald Trump."

Cohen becomes the latest in a string of former Trump administration insiders who have resorted to fundraising amid mounting legal troubles, including FBI Deputy Director Andy McCabe and agent Peter Strzok, who were both fired after internal reviews found that they had violated the agency's policies.

News that Cohen had reached a deal with federal prosecutors in which he implicated Trump in potential campaign finance violations rocked Washington, D.C. on Tuesday. Cohen, as part of a guilty plea agreement, said that he had made illegally large hush money contributions at the direction of a candidate for federal office, raising the possibility that Trump could have conspired to break campaign finance law.

For his part, Trump has played down Cohen's plea, saying in a series of tweets that campaign finance laws are rarely prosecuted at the criminal level, and are often handled as civil matters -- unless politics gets involved.

Trump also wrote: "If anyone is looking for a good lawyer, I would strongly suggest that you don’t retain the services of Michael Cohen!"

Davis, a longtime Democratic operative who had served as special counsel to former President Bill Clinton, was mum as to whether Cohen had any knowledge about alleged criminal collusion between Trump officials and the Russian government.

"I'm not going to answer questions until Mr. Mueller is finished with his investigation," Davis said, referring to Special Counsel Robert Mueller. Davis added that there's "no question" that Trump had committed a federal campaign finance violation, and suggested it would be legally permissible for prosecutors to indict the president.