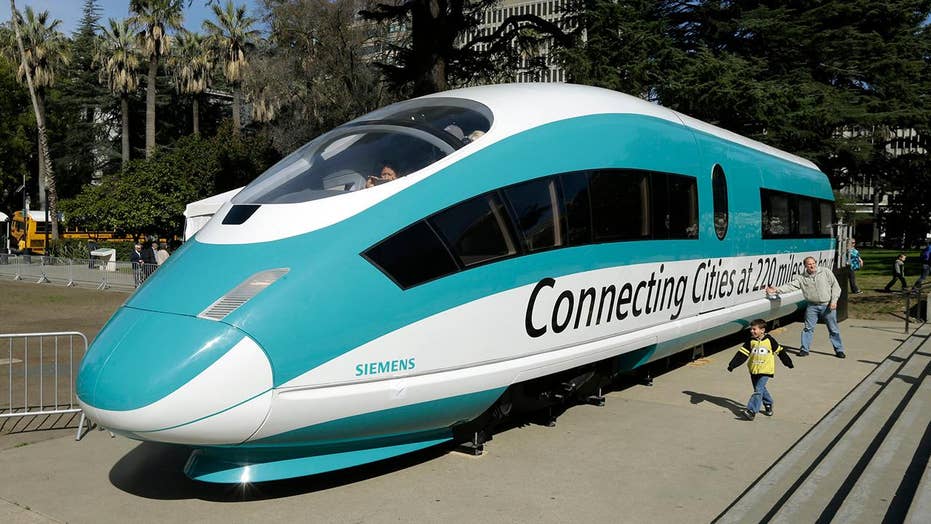 The California Republican Party chose 38-year-old Jessica Patterson as its leader on Monday, and the first-ever woman to chair the state GOP wasted no time in vowing to "take the fight to Democrats" and lead a "Republican comeback" in the liberal stronghold.

Patterson's appointment comes as state Democrats are foundering on a series of high-profile issues on the national stage, with the White House suggesting it will sue the state to reclaim billions of federal dollars wasted on the state's constantly delayed -- and eventually abandoned -- high-speed rail project.

"Let's serve notice to the Democrats in California that we are back and we are ready to deliver on the Republican comeback," Patterson, who also became the first Latina to ever chair the state GOP, said after winning. "Then let's dig in and make it happen."

Patterson has a lengthy career in Republican politics, and previously directed the organization California Trailblazers, which prepares new candidates to run for office. She previously worked for the administrations of former Gov. Arnold Schwarzenegger, as well as the campaign of gubernatorial candidate Meg Whitman, among others.

Jessica Patterson, candidate for chair of the California Republican Party, speaks to delegates after her nomination during the party convention in Sacramento, Calif., Saturday, Feb. 23, 2019. (AP Photo/Steve Yeater)

The state, however, has shifted markedly leftward in recent years. California Democrats hold all statewide offices and a veto-proof supermajority in the state legislature, and Republicans have not won statewide office since 2006. The GOP ranks as third party status in voter registration behind Democrats and independents.

The 2018 election pushed the party further toward the brink of extinction in the nation's most populous state, with Democrats flipping seven U.S. House seats once considered GOP strongholds and Republicans holding less than a quarter of state legislative seats.

"We're going to be about one thing: Winning."

The results stunned Republicans, with then-House Speaker Paul Ryan calling the outcome "bizarre." Despite holding substantial leads on Election Day, many Republican candidates in California saw their advantage shrink, and then disappear, as late-arriving Democratic votes were counted in the weeks following the election.

Some Republicans blamed a newly legal practice called "ballot harvesting." Two years ago, California Gov. Jerry Brown signed into law AB1921, which legalized the so-called practice of “ballot harvesting.” Previously, only a family member or someone living in the same household was permitted to drop off mail ballots for a voter, but the new allowed anyone – including political operatives – to collect and return them for a voter.

But without substantive evidence of electoral misconduct, the California Republican Party's delegates had to look inward and decide where the party would go next with its leadership. A majority of about 1,200 delegates chose Patterson, who previously headed a Republican candidate recruitment and training program.

Patterson argued bringing the Republican message into new communities would be the key to success and said she would push candidates to focus on California issues rather than the president's message.

Her two rivals, former state Assemblyman Travis Allen and party activist Steve Frank, said energizing the party base that loves President Trump was the key to success. Both are strident backers of the president.

Stephen R. Frank, candidate for chair of the California Republican Party, speaks to delegates after his nomination during the party convention in Sacramento, Calif., Saturday, Feb. 23, 2019. (AP Photo/Steve Yeater)

But Patterson had the backing of most elected officials, including top Trump supporters like GOP House Minority Leader Kevin McCarthy. She was viewed as the candidate better prepared to raise money and do the grunt work required of a chair.

Her opponents argued she represents more of the same leadership that led the party into decline. Both charged the state party has not advocated for strong conservative values and shied away from full-throated Trump support. Allen came in second and Frank placed third.

CALIFORNIA NEWS CREW SURPRISED AS ROBBERS DRIVE UP, ROB THEM, SHOOT THEIR GUARD IN LEG

After the vote, Allen said only that he hopes "the Republican party starts fighting again for the good of all Californians."

Patterson said prior to the election she supports Trump. Beyond McCarthy, she had the backing of key Trump supporters such as U.S. Rep. Devin Nunes and the state's two Republican National Committee members.

Jessica Patterson, right, shares a moment with her mother Julie Millan, after being nominated for chair of California Republican Party during their convention in Sacramento, Calif., Saturday, Feb. 23, 2019. (AP Photo/Steve Yeater)

But some of Trump's most fervent California supporters were disappointed by the outcome. Stephanie Sporcich, a teacher, said she got involved with the state party because of Trump's election. She cast her vote for Allen, and saw the chairmanship race as a battle between the grassroots and the establishment.

"We're the ones that are the strongest Trump supporters with Trump values," she said, adding she and other new activists have already successfully infiltrated the party structure and will keep working to do so.

ANALYSIS: CALIFORNIA POLITICS WILL GET CRAZY IN 2019. WHAT'S THE SILVER LINING FOR THE GOP?

But Elizabeth Patock, another teacher, liked Patterson's focus on bringing "non-traditional Republicans" into the party. Patock did not vote for Trump and said she dislikes how ugly national politics have become.

She said Patterson "has a positive message."

Patterson is the first Latina to lead the state party. She did not make her personal heritage a major piece of her campaign, but said the party needs to use "new messengers."

California Republicans have struggled to appeal to the state's growing Latino and Hispanic population because of the party's position on illegal immigration, among other things. Patterson did not provide specifics Sunday on how she will deal with that issue.

As a gesture of goodwill, she named Frank and Allen as co-chairs of a voter registration committee. Both had highlighted the party's outsourcing of voter registration activities as a major flaw. And she called for unity among California Republicans.

"Our success will be a team effort, no egos, no personal agenda, no drama," she said. "We're going to be about one thing: Winning."