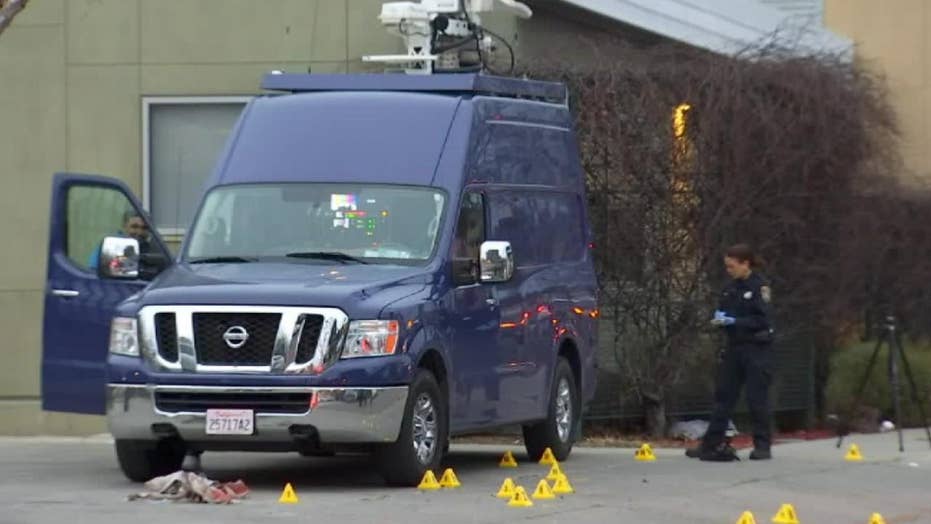 Authorities arrested a man suspected of shooting the security guard of a news crew that was robbed while covering the Oakland teachers strike, according to a statement by the CBS affiliate KPIX.

A news crew covering the ongoing teachers strike in Oakland, California on Sunday ended up victims of a crime when two people robbed them -- and then shot their security guard before fleeing.

KPIX-TV reporter Joe Vasquez and photographer John Anglin were at the Oakland Library about 5 p.m. conducting interviews about the teachers strike when a car pulled up and two people got out, one holding a gun and demanding their car.

After the news crew gave up their equipment one of the thieves shot security guard Matt Meredith in the leg, the news station said.

"John abandoned the camera, took cover inside the news van where I was and told me to get down," Joe Vasquez wrote on Twitter. "We heard a flurry of loud gunshots. Very close! More shots, I saw a guy drag the camera away and saw our guard Matt was hit. Quickly called 9-1-1."

Vasquez said in another post the guard, a retired Berkeley police officer, "got some shots off" at the gunman.

The guard was shot in the upper leg, transported to Highland Hospital and listed in stable condition, the CBS affiliate reported.

An Alameda County Sheriff spokesman said a 21-year-old man with several gunshot wounds walked into a nearby hospital after the incident. Oakland police arrested the man on suspicion of shooting the news crew's guard.

About two hours later, Oakland officers were involved in a chase with a sedan that was believed to be connected to the robbery and shooting. That vehicle ended up crashing into several cars before the driver was detained and arrested, according to KPIX. Video of the chase was posted to Twitter.

Oakland Police Public Information Officer Johanna Watson also told the television station the department had detained several other individuals in connection with the armed robbery and shooting. The stolen camera was recovered. Additional details were expected to be released later Monday.

Two suspects wer earrested after a KPIX-TV news crew was robbed and a security guard assigned to the crew was shot in the leg. (KTVU)

Assaults on routine assignments became so commonplace in recent years in the Bay Area that some television stations have hired armed guards to ride with news crews, according to the Associated Press. In November 2012, a group of men punched a KPIX cameraman while he was filming in front of an Oakland high school and fled with his camera while it was still recording.

"We don't know what the market is for these cameras," San Francisco Police Sgt. Michael Andraychuk told the news agency.

Even though the cameras can cost upward of $50,000 each, it is specialized equipment that can't be easily sold on the black market, Andraychuk said, and none of the stolen cameras have turned up on Craigslist, eBay or any other online marketplace.