“I think if you look at Joe's record, and you look at my record, I don't think there's much question about who's more progressive,” the independent senator from Vermont said Sunday on ABC’s “This Week.”

But as he and a slew of like-minded 2020 candidates champion policies such as "Medicare-for-all" and the Green New Deal in a bid to prove their progressive credentials, the leftward swing of the party is coming under growing criticism from a small but vocal cadre of center-left Democratic candidates.

The Colorado Democrat made his comments during a trip to the first-in-the-nation primary state of New Hampshire on Friday to spotlight his new economic proposals.

And as he has in the past, Hickenlooper targeted some of the progressive policy proposals that Sanders pushed from the Democratic extreme to the party’s mainstream, saying “these are certainly big ideas; they are also not good ideas. They would bloat the federal government. They would massively raise taxes. They would depress economic growth. And let me assure you, in the end, they would hurt working people.”

While not mentioning him by name, it seemed clear that Hickenlooper – who describes himself as a “pragmatic progressive” – was targeting Sanders.

During a scrum with reporters, Hickenlooper continued to disagree with Sanders' proposals but praised his rival, saying “he uniquely created clarity around the issues being discussed…. Do I respect him? Absolutely.”

Sen. Michael Bennet – the other Democratic presidential contender from Colorado in a field that now tops 20 contenders – also criticized Sanders’ Medicare-for-all proposal as he entered the race last week.

In pushing his “public option,” Bennet was clear to contrast his plan with Medicare-for-all, saying “I don’t think 180 million Americans want to give up the insurance they already have through their work or their union.”

And in an interview last month with Fox News, Bennet said he came up with his plan – known as ‘Medicare X’ – because people “don’t want to be dictated by the federal government what that choice has to be.” 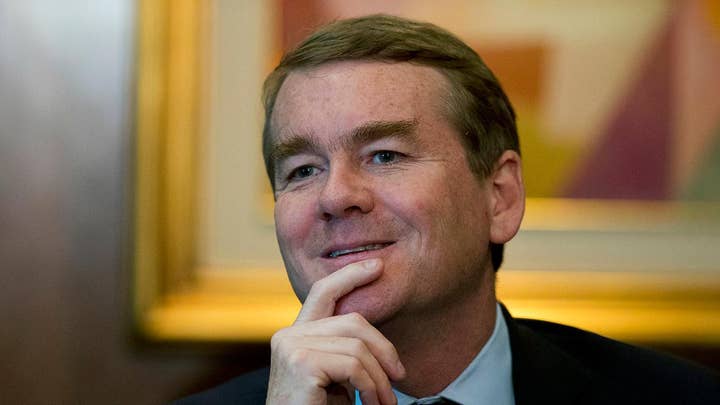 Former three-term Rep. John Delaney of Maryland, another more moderate candidate and a longshot for the nomination, is also taking aim at policies he feels are too far to the left.

“You have to put forward ideas that make sense,” he said on the campaign trail in New Hampshire in late March.

Delaney charged that many of the other 2020 presidential candidates are “running on things that aren’t real solutions.”

Among the proposals he pointed to was the Green New Deal, the sweeping plan popular with the Democratic Party’s progressive base that aims to transform the country’s economy to fight climate change -- while enacting a host of new health care and welfare programs.

Delaney voiced concern that some of the proposals being pushed by his rivals will give President Trump and fellow Republicans ammunition and “could take us down a path where we’re not that competitive against the president” in next year’s general election.

“Democrats are going to realize that this election in 2020 should not be about kind of throwing the whole model of the country out of the window and starting from scratch. That feels like a very tough race to win,” he said.

HARRIS DISTANCES HERSELF FROM SANDERS

But it’s not just the longshots who are voicing concern.

Sen. Kamala Harris of California, one of the leading contenders for the nomination, clearly distanced herself from Sanders during her first campaign swing in New Hampshire in February.

While some Democrats are taking issue with the policies from the left, President Trump’s re-election campaign and the Republican National Committee for months have been raising alarms over socialism as they’ve attacked the emerging Democratic 2020 field as too extreme.

A recent Fox News poll indicated that 43 percent of Democrats had a favorable view of socialism. That number dropped to 25 percent among independent voters and to just 6 percent among Republicans questioned in the survey.