Buttigieg, the mayor of South Bend, Indiana, was the first Democratic White House hopeful on Monday to reveal fundraising figures from the January through March period, the first quarter of fundraising since the kickoff of the 2020 presidential race.

“You’re going to see bigger numbers from other campaigns today and in the next few days. That’s okay,” Buttigieg told supporters in an email and on social media. “This has always been an underdog project. But with a first fundraising report like this, we certainly cannot be ignored.” 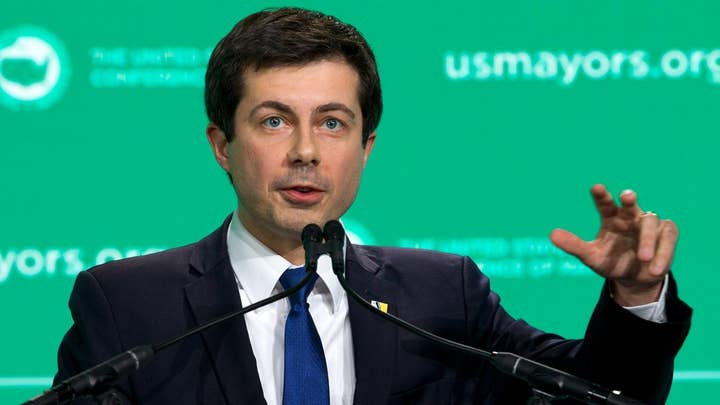 THE MAD DASH FOR CAMPAIGN CASH

Highlighting his grassroots appeal, the Afghanistan War veteran who would become the first openly gay president if he reached the White House spotlighted that his average donation was $36.35.

The fundraising haul is the latest evidence that Buttigieg, who was considered a long shot for the Democratic nomination when he first jumped into the race, has become a legitimate contender over the past month, amid a surge in contributions from supporters, growing crowds at his events and rising coverage by the political media.

As Buttigieg predicted, a bigger fundraising figure from a rival for the nomination was revealed later in the day with Harris' announcement.

The California senator's campaign spotlighted that 98 percent of contributions were under $100 and that 99.45 percent of donors could contribute again.

Harris brought in $1.5 million in the first 24 hours of her campaign. That figure was topped in February by Sen. Bernie Sanders of Vermont, who raised $5.9 million in his first day as a candidate, and by former Rep. Beto O’Rourke of Texas, who hauled in $6.1 million in March in the 24 hours after launching his bid. As of late Monday evening, no other candidates in the large field of 2020 Democrats had announced their fundraising figures for the first three months of the year.

Sunday was the last day candidates can bring in campaign cash in the first fundraising quarter for the 2020 presidential race.

Fundraising is considered an important barometer of a candidate's popularity and a campaign's strength. The cash can be used by a candidate to build an organization and hire staff and consultants, increase voter outreach efforts, travel and fund ads.