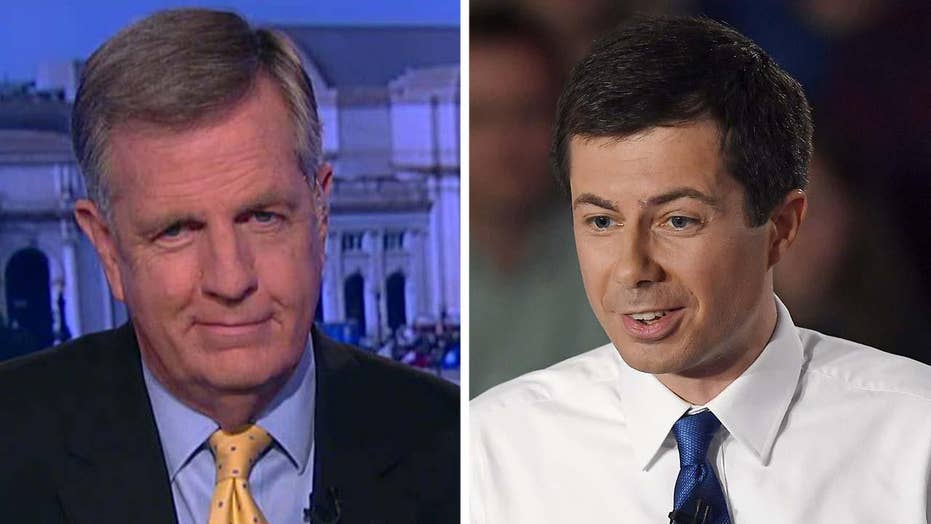 Brit Hume praises Pete Buttigieg: The most impressive candidate in the Democratic field

It will be interesting to see how Pete Buttigieg stacks up against Joe Biden on the debate stage, says Fox News senior political analyst Brit Hume.

Mayor Pete Buttigieg is the "most impressive... candidate" in terms of political talent in the current 2020 Democratic presidential field, Brit Hume said, comparing the South Bend, Ind. mayor's rise in popularity to the "emergence of Barack Obama."

"I think Pete Buttigieg is the most impressive, by far, candidate in terms of just raw political talent in the Democratic field," Hume said Monday on "Special Report."

"And, he may be the most impressive candidate I've seen since the emergence of Barack Obama," Hume, Fox News' senior political analyst, said.

Hume said Buttigieg is "as fluid as he can be, [and] he seems to have something to say about nearly every issue."

"He seems comfortable on the big stage -- articulate, even humorous," he added.

However, Hume warned that some of Buttigieg's political positions are "well outside the mainstream" on issues such as reparations and abortion.

"As far as I can tell from what he said last night, there is no moment before birth when he wouldn't support a woman's right to an abortion and that's a position not widely held in this country," Hume said, referring to Buttigieg's Sunday town hall with "Fox News Sunday" anchor Chris Wallace.

Hume said it will be interesting to see how Buttigieg "stacks up" against a "more experienced, older" candidate in former Vice President Joe Biden.