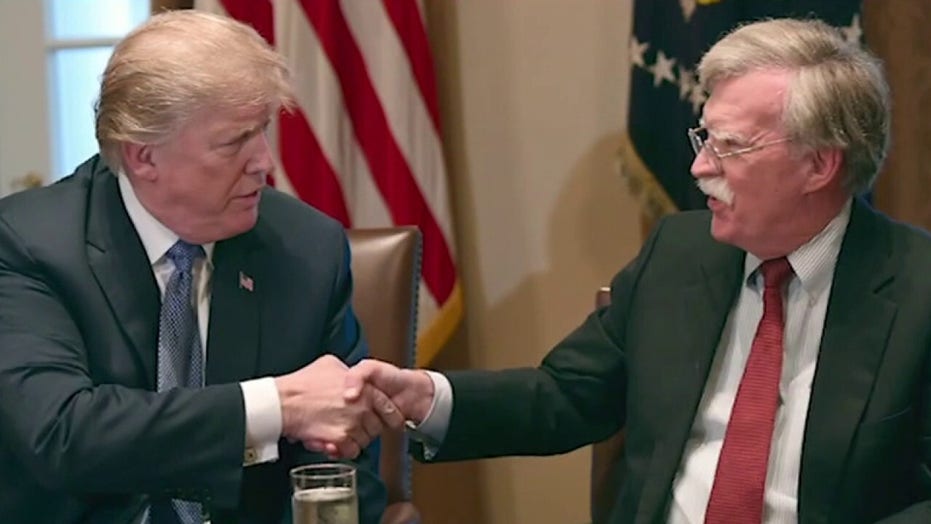 Bolton says Trump 'not fit for office'; reaction and analysis on 'The Five.'

Former Trump National Security Adviser John Bolton said in an interview with NPR released Monday morning that Democrats' impeachment efforts failed in part because they tried to fit impeachment into their party's primary calendar, a move he said played into President Trump's hands because the president benefited from the "very narrow focus" of the impeachment investigation.

Bolton's interview with NPR is part of a media blitz by the now-shunned former member of Trump's inner circle ahead of the publication of his tell-all about his time as national security adviser titled "The Room Where it Happened: A White House Memoir." Bolton participated in an interview with ABC News that aired Sunday night and spoke with USA Today for a story that also was released Sunday.

"And the consequence of the very narrow focus that the Democrats adopted without consultation outside their own narrow circle, as far as I can tell, and their rush to get it done so that the impeachment proceedings didn't interfere with the Democratic presidential nomination had the effect of pushing House Republicans into a corner," Bolton said in his interview with NPR.

"And so what ended up was a bitterly partisan debate that prefigured essentially what was then going to happen in the Senate," he added. "So if the objective of the process really was to seek impeachment and conviction, the entire strategy going in was misguided."

Bolton refused to testify in the House of Representatives' impeachment proceedings, in which a multitude of current and former officials, primarily from the State Department, were paraded into depositions and hearings and asked questions about Trump's controversial decision to withhold security funding from Ukraine in what Democrats alleged was an effort to extract political favors from the country.

The former national security adviser, who was widely reported to have strongly objected to the delay in the aid, refused to testify before the House, instead asking for a court order to confirm that former officials of his stature could do so over objections from the president. Democrats impeached the president anyway, aiming to get to a Senate trial quickly ahead of the party's primary race as multiple Democratic senators were pursuing the presidency.

Several officials testified to the House that Bolton was beside himself regarding the president's Ukraine dealings.

FILE - In this Sept. 30, 2019, file photo, former National security adviser John Bolton gestures while speakings at the Center for Strategic and International Studies in Washington. A federal judge has ruled, Saturday, June 20, 2020, that former national security adviser John Bolton can move forward in publishing his tell-all book. The Trump administration had tried to block the release because of concerns that classified information could be exposed.(AP Photo/Pablo Martinez Monsivais, File)

Dr. Fiona Hill, one of several to testify to Bolton's actions during this time, relayed that Bolton said Trump’s personal attorney Rudy Giuliani was a “hand grenade,” and said he would not take part in “whatever drug deal [Amb. Gordon] Sondland and [acting chief of staff Mick] Mulvaney are cooking up," in relation to Ukraine.

Bolton later offered his testimony to the Senate if subpoenaed, but the chamber decided to hold the trial without taking any further witness testimony than was heard in the House. The president was not convicted on the two impeachment charges and remains in office.

Bolton, in his book, which was obtained by Fox News ahead of publication, confirmed the internal fracas over the president's withholding of the Ukraine aid, allegedly in exchange for restarting an investigation into the family of now-presumptive Democratic presidential nominee Joe Biden.

"I told [Hill] to take this whole matter to the White House Counsel's office; she quoted me accurately as saying, 'I am not part of whatever drug deal Sondland and Mulvaney are cooking up,'" Bolton wrote. "I thought the whole affair was bad policy, questionable legally, and unacceptable as presidential behavior."

Bolton, speaking with NPR, also said that Democrats "set themselves up for failure, right at the beginning" and that if the impeachment process was "simply to do some virtue signaling, well, that probably was accomplished."

In this image from video, House impeachment manager Rep. Adam Schiff, D-Calif., holds redacted documents as he speaks during the impeachment trial against President Donald Trump in the Senate at the U.S. Capitol in Washington, Wednesday, Jan. 22, 2020. (Senate Television via AP)

He also equated Democrats' effort to speed along the impeachment process to best fit their political goals to the allegations made against Trump.

"And I understand what their problem was with their presidential nomination. But let's be clear: Impeachment is probably the gravest constitutional responsibility the House has," Bolton said. "And I'm sorry that that grave responsibility was affected by their own political calculus. But in effect, that's what the Ukraine allegations about Trump were all about, torquing legitimate government power around his own political interest."

Bolton has received widespread criticism for not telling his story earlier from Democrats who say it could have made a difference in impeachment. Many on the left have argued for a boycott of the book, saying Bolton is trying to profit at the expense of the country.

"Tonight, Bolton was pressed on why he didn’t come forward and testify, instead saving it for a book," Rep. Adam Schiff, D-Calif., one of the House impeachment managers, said Sunday. "Bolton insisted it wasn’t about the cash. Well, to quote Dale Bumpers during a different impeachment: 'When you hear somebody say, 'This is not about money,' it's about money.'"

But Bolton emphasized in his NPR interview that Democrats didn't seem interested in getting bipartisan buy-in from the beginning.

"They didn't take any of the steps that one would think would make sense, to reach out to Republicans who might be sympathetic to considering the president's behavior," Bolton said. "There was nothing akin to an Ervin committee process, as there was during the Watergate days."