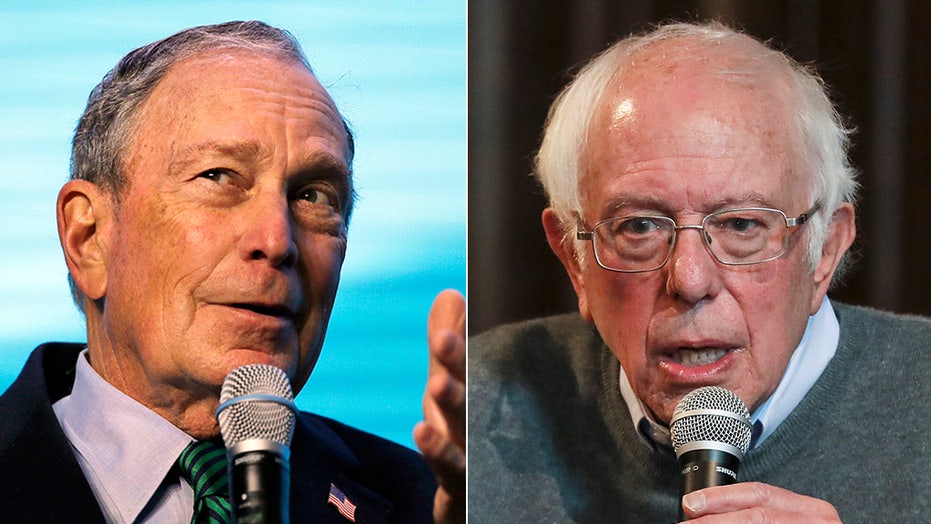 Former New York City Mayor Michael Bloomberg's campaign warned in an internal memo that Sen. Bernie Sanders of Vermont will be nearly unstoppable on his way to the Democratic presidential nomination unless other moderate candidates drop out before Super Tuesday.

"As the race stands today, Sanders is poised to leave Super Tuesday with an over-400 delegate lead verses his next closes competitor [Bloomberg] - a likely insurmountable advantage," the first bullet point of the Feb. 17 memo, first obtained by Axios, says. Fox News has confirmed the authenticity of the memo.

The memo says that if Sanders continues on the path he is on without certain non-Bloomberg candidates dropping out, "it will be all but impossible to stop him from getting to a plurality (or even majority) of pledged delegates."

The document goes on to point out the alleged weaknesses in each of Bloomberg's moderate competitors' campaigns before concluding: "If [Joe] Biden, [Pete] Buttigieg, and [Amy] Klobuchar remain in the race despite having no path to appreciably collecting delegates on Super Tuesday (and beyond), they will propel Sanders to a seemingly insurmountable delegate lead by siphoning votes away from [Bloomberg]."

TRUMP AND BLOOMBERG SPAR IN TWITTER AHEAD OF DEBATE

The memo reflects the public rhetoric from the Bloomberg campaign, which has portrayed the Democratic nomination as a two-person race between the New York billionaire and the democratic socialist from Vermont.

"Taking a step back: this is now a 3-candidate race between [Bloomberg], Sanders, and Trump. Both Sanders and Trump know that [Bloomberg] poses the greatest threat to their chances of winning this election," the memo's closing paragraph reads, before taking a shot at voters who support President Trump and Sanders. "As we ascend and begin (hopefully) consolidating support, there will be blowback from both Sanders and Trump - both candidates themselves, but also their supporters, who share some attributes. We expect them to escalate their attacks on [Bloomberg], our campaign staff, and our supporters."

The feud between Trump and Bloomberg has been simmering for weeks and continued Wednesday as Bloomberg readied for his first presidential debate appearance.

"Is corrupt Bloomberg News going to say what a pathetic debater Mini Mike is, that he doesn’t respect our great farmers, or that he has violated campaign finance laws at the highest and most sinister level with 'payoffs' all over the place?" Trump tweeted.

Meanwhile, Bloomberg's and Sanders' campaigns are sparring over the septuagenarians' history of heart trouble. After Sanders said he would refuse to release more medical records than he already has on a CNN town hall Tuesday night -- he had a heart attack in October -- Sanders' press secretary Briahna Joy Gray claimed that Bloomberg "has suffered heart attacks in the past" and argued no one is concerned about his medical records.

"Facts matter," he continued. "This isn't the way to defeat Donald Trump in November.

Sheekey was one of the recipients of the leaked memo, along with senior Bloomberg adviser Howard Wolfson.