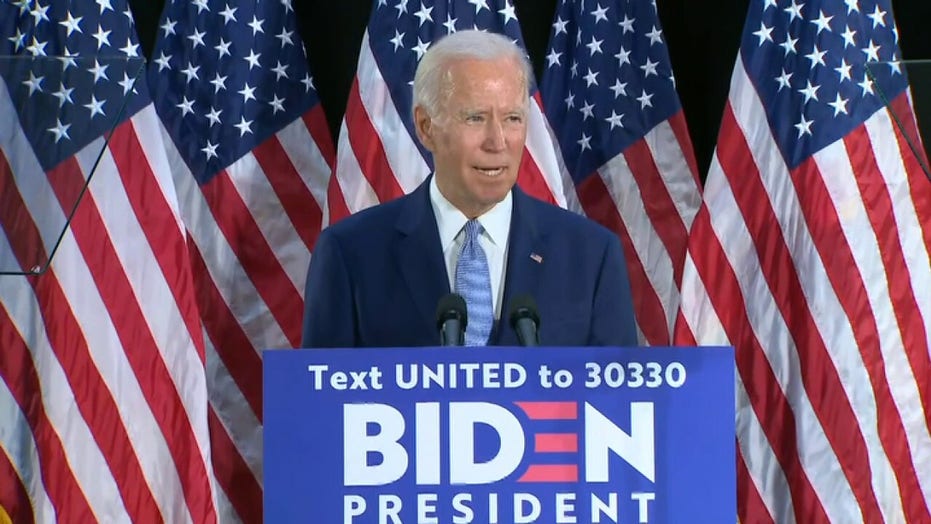 Joe Biden called the news that the nation’s sky-high unemployment level dropped “a sigh of relief,” but he accused President Trump of “spiking the ball” on Friday’s jobs report and argued the president was “completely oblivious” to the tens of millions of Americans still out of work.

The former vice president and presumptive Democratic nominee also described as “despicable” remarks Trump made earlier in the day about George Floyd looking down and seeing “a great day” for the nation.

Biden gave his brief address about two hours after the president repeatedly touted the jobs report as he spoke for 40 straight minutes in the Rose Garden. The Labor Department reported that the national unemployment rate unexpectedly declined to 13.3 percent in May – down from 14.7 percent in April.

The jobs level had soared to its highest rate in nearly a century after much of the nation’s economy was shut down in March and April to prevent the spread of the coronavirus pandemic, which has swept the nation and the globe. With more than 42 million people having filed for unemployment since the start of the outbreak, some economists predicted the jobless rate would hit 20 percent, a level not seen since the Great Depression of the 1930s.

But Friday’s report indicated that 2.5 million people gained jobs in May, as many states and counties across the country began to loosen coronavirus social distancing restrictions and reopen their economies last month. 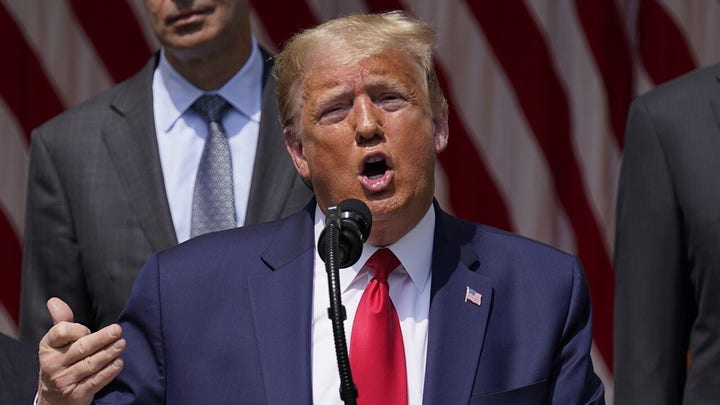 The president forecast that “next year's going to be one of the best years we've ever had economically,” but standing outside the White House, he warned that the economic recovery would falter next year if “the wrong people get in here.” 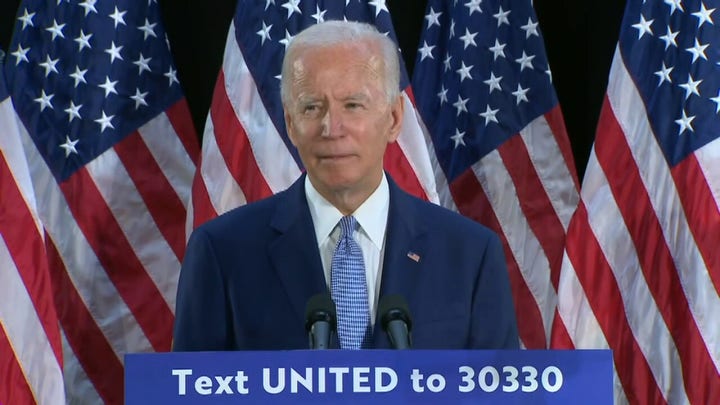 Biden -- who made his comments in an address at Delaware State University, a historically black school -- noted the racial disparities in the jobs report, saying that black unemployment went up and Latino unemployment jumped.

“While temporary layoffs went down, permanent layoffs went up,” Biden emphasized. “Donald Trump still doesn't get it. He’s out there spiking the ball, completely oblivious to the tens of millions of people who are facing the greatest struggle of their lives. These folks aren’t feeling any less pain today than they were yesterday.”

And he charged that “a president who takes no responsibility for costing millions and millions of Americans their jobs deserves no credit when a fraction of them return.”

TAKING AIM AT TRUMP OVER UNREST SPARKED BY FLOYD'S DEATH, BIDEN SAYS THE PREISDENT'S 'PART OF THE PROBLEM'

The president – during his comments – referenced George Floyd. The 46-year-old black man’s death last week--after a white Minneapolis police officer put his knee on the handcuffed Floyd’s neck for nearly 9 minutes--sparked peaceful protests as well as violent clashes and rioting that are still causing unrest in cities across the nation.

It was unclear what the president was referring to when he said “great thing.”

Up until that point, Trump had mostly been praising the jobs report. But he had stressed how important it was for law enforcement to “dominate the streets” amid the wave of unrest. And moments before mentioning Floyd’s name the president said that “equal justice under the law must mean that every American receives equal treatment in every encounter with law enforcement, regardless of race, color, gender, creed. They have to receive fair treatment from law enforcement. But they have to receive it. We all saw what happened last week.”

Biden responded in his speech.

"We’re speaking of a man who was brutally killed by an act of needless violence and by a larger tide of injustice that has metastasized on this president’s watch as he’s moved to split us based on race and religion, ethnicity," Biden stressed. "George Floyd's last words, 'I can't breathe, I can't breathe,' have echoed all across this nation and quite frankly around the world."

And he charged that “for the president to try to put any other words in the mouth of George Floyd I frankly think is despicable."

The president, in his Rose Garden event, once again praised his administration’s response to the coronavirus. He spotlighted that his actions saved “millions of lives,” crediting his decision in late January to “stop people very early on from China, from coming in. Because we stopped early at the end of January, very early, people coming from China who were infected coming into our country.”

The global pandemic originated in China.

Biden – who for nearly three months has blasted Trump for originally downplaying the severity of the virus and then botching the federal response – accused the president of “complete incompetence and mismanagement of the response.”

The former vice president said that the United States has 4 percent of the world’s population but a quarter of the world’s deaths due to the pandemic.

“Donald Trump is patting himself on his back. He just has no idea… what’s really going on in this country. He has no idea the dept of the pain that so many people are still enduring,” Biden emphasized. “He remains completely oblivious to the human toll of his indifference. It’s time for him to step out of his own bunker and take a look around at the consequences of his words and his actions.”

As he was departing Delaware State following his speech, Fox News shouted a question to Biden from a distance. But the former vice president didn't stop to answer.