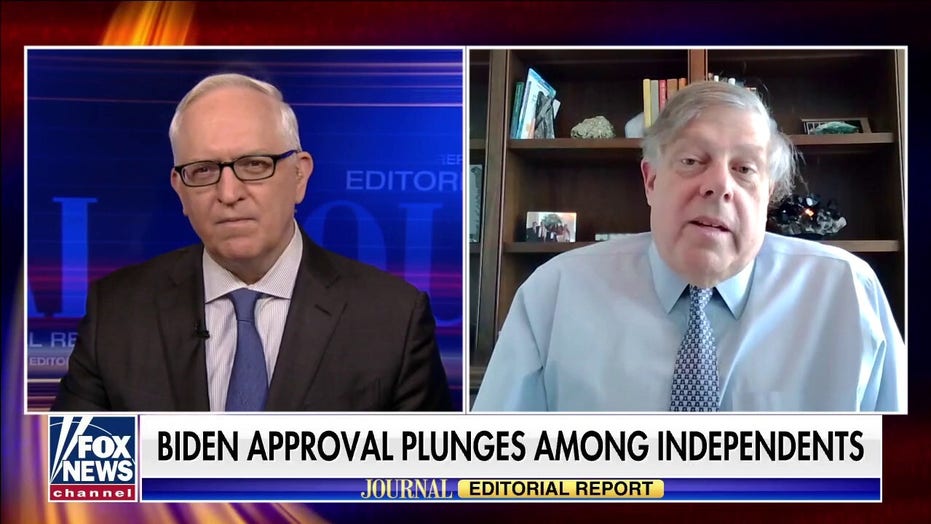 How Joe Biden can save his presidency

President Biden appears to be leaning more on his former boss as the White House comes under increased pressure to improve the nation's economy and outlook on the future of the Democratic Party.

Former President Obama will attend the United Nations COP26 climate summit in Glasgow, Scotland, early next month to highlight the "important progress" made with climate change since the Paris Agreement took effect. Meanwhile, President Biden and his Cabinet participate in the World Leader Summit in Glasgow on Nov. 1 and 2 at the beginning of the 26th Conference of the Parties to the UN Framework Convention on Climate Change.

It is unclear whether Obama will participate in any meetings or events with Biden and his Cabinet officials. Earlier this year, the White House said Biden and Obama spoke "regularly" about a "range of issues" as well as personal matters but did not disclose the frequency of those conversations.

US President Barack Obama smiles alongside Vice President Joe Biden before signing the healthcare insurance reform legislation during a ceremony in the East Room of the White House in Washington on March 23, 2010. SAUL LOEB/AFP via Getty Images)

Obama will also campaign with Virginia gubernatorial candidate former Gov. Terry McAuliffe in the state capital city of Richmond a week from Saturday, on Oct. 23.

An average of the latest polls in the race indicates that McAuliffe – who’s running for his old job – holds a slight, single-digit edge over Republican nominee Glenn Youngkin in a state that Biden won by 10 points in last year's election and where Republicans haven't won a statewide contest in a dozen years.

While Obama is the biggest name to join McAuliffe in the coming days ahead of Virginia's Nov. 2 election, the former governor will also campaign with First Lady Jill Biden on Friday in Richmond.

McAuliffe’s lead over Youngkin, a first-time candidate and former CEO of a large private equity firm, started shrinking over the summer amid the sinking of Biden’s approval ratings.

"You're talking about us stepping up and spending money on providing childcare tax credits — making those permanent to help families, who for a long time, have needed help," Obama told the outlet. "You're looking at making our infrastructure function more efficiently ... you're talking about rebuilding a lot of buildings, roads, bridges, ports so that they are fortified against climate change. And also, that we start investing in the kinds of energy efficiency that's going to be required to battle climate change."

It is unclear whether the duo's upcoming overlap is part of a broader campaign to win more support for Biden and the Democratic Party ahead of the 2022 midterm elections. The White House did not immediately respond to an inquiry from Fox News.

President Joe Biden delivers remarks on the debt ceiling during an event in the State Dining Room of the White House, Monday, Oct. 4, 2021, in Washington. (AP Photo/Evan Vucci)

Biden’s approval rating hovered in the low-to-mid-50s during his first six months in the White House. But the president’s numbers started sagging in August, in the wake of Biden's much-criticized handling of the turbulent U.S. exit from Afghanistan, and following a surge in COVID-19 cases this summer among mainly unvaccinated people due to the spread of the highly infectious delta variant, as the nation continues to combat the coronavirus, the worst pandemic to strike the globe in a century.

The plunge in the president’s approval was also compounded by the latest surge of migrants trying to cross into the U.S. along the southern border with Mexico.

The president stands at 45% approval and 49% disapproval in an average of all the most recent polls compiled by Real Clear Politics.