EXCLUSIVE: Joe Biden, if elected president, would undo a number of key Trump administration’s policies related to immigration, and specifically illegal immigration, a new report predicts -- concluding that the differences between the two candidates on the issues is “stark.”

“The contrast between President Trump and Biden’s immigration policies is stark,” the report by the conservative Heritage Foundation, obtained by Fox News ahead of its release, says.

“If Biden were to become president, he would return to many of the same immigration policies in place during the Obama administration. This would include protecting and expanding the DACA program, admitting at least 125,000 refugees annually and seeking amnesty for 11 million illegal aliens,” it says.

President Trump ran his 2016 campaign with immigration as a primary issue, particularly stopping illegal immigration across the southern border with Mexico, and kept it as a priority during his administration. Biden has promised to undo a number of the policies that Democrats have blasted as cruel.

Trump has pushed to end the Obama-era Deferred Action for Childhood Arrivals (DACA) program that gives protection from deportation to some illegal immigrants who came to the country as children. However, he has hit roadblocks, particularly in the Supreme Court. Biden, the report notes, would give DACA recipients (whom he calls “Dreamers”) a roadmap to citizenship and reinstate the DACA program.

“Biden would also make ‘Dreamers’ eligible for federal student aid (loans, Pell grants) and debt-free community college,” it says, also noting that the term “Dreamer” is broader than just the 825,000 DACA recipients and can refer to the at least 3.6 million illegal immigrants who came to the U.S. under the age of of 18 on the date a “Dreamer” bill would be enacted. 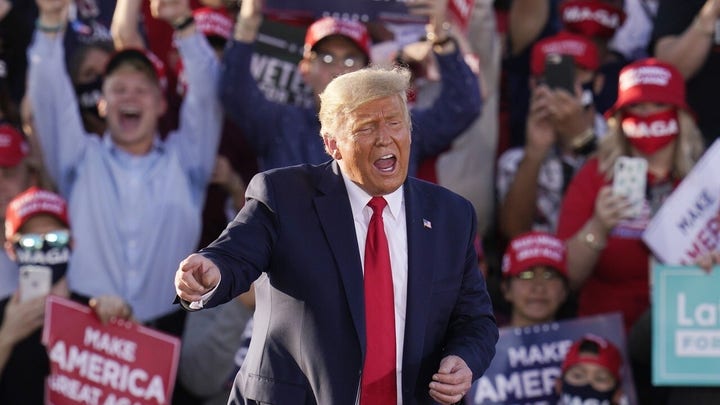 "On the question of what author Lora Ries describes as a “general amnesty,” the report finds that Trump has “indicated a willingness to discuss amnesty with Congress as part of a negotiation for other immigration amendments that he deems are needed” -- but that he would likely face pushback from his base.

“In a second term, President Trump would pursue merit-based immigration reform with Congress, navigate rescinding DACA while negotiating an amnesty with Congress (for anywhere from 800,000 to up to 11 million illegal aliens) and continue to secure the border in the face of strong COVID-economy immigration push factors,” the report says.

Biden, meanwhile would “aggressively advocate” for legislation in Congress for a roadmap to citizenship for an estimated 11 million illegal immigrants, claiming it would help the economy and provide relief for people living in the U.S. for years.

The Heritage report also notes that Trump's travel restrictions on countries deemed to be national security threats -- including Libya, Iraq, North Korea, Venezuela and Yemen -- would likely be rescinded, with the Biden campaign describing it as a “Muslim ban."

“It is yet another abuse of power by the Trump administration designed to target primarily black and brown immigrants. Biden will immediately rescind the ‘Muslim bans,’” his campaign website states.

Another key area where the two differ is on the treatment of asylum-seekers and refugees. Biden would end a number of policies, including the Migrant Protection Protocols -- known as the Remain-in-Mexico policy. That policy keeps migrants in Mexico as they await their immigration proceedings, and has been hailed as reducing the pull factors bringing migrants to the border. Opponents say it puts migrants seeking asylum in harm's way.

The report finds that Biden would also “dramatically increase” government resources for asylum seekers and a network of support for them. Similarly, on refugees, where Trump has taken a number of moves to limit the number admitted by the U.S., Biden would seek to increase the refugee cap from 18,000 to 125,000 and seek to raise that further.

Biden would also seek to end the Trump public charge rule, which restricts green cards for immigrants judged likely to be reliant on welfare. The report also finds that Biden would expand “family-based chain migration” by broadening the definition of “immediate relative” and approve family visa beneficiaries to enter the U.S. even if a green card was not yet available to them, the report says.

A Biden presidency is not the only event that could roll back some of Trump's policies on immigration. The Supreme Court this week agreed to hear two cases on challenges to policies -- specifically the Remain-in-Mexico policy and the construction of the wall at the border.