CONCORD, N.H. – Joe Biden is pushing back against criticism by Rep. Alexandria Ocasio-Cortez that he’s “middle of the road” when it comes to tackling climate change.

The former vice president and Democratic front-runner in the race for the White House – speaking with reporters during a campaign stop in New Hampshire on Tuesday – also called a new move by Attorney General William Barr to investigation the origins the Russia Investigation “Alice in Wonderland.”

And he slammed President Donald Trump’s threats to send U.S. forces against Iran, saying the Republican president “has no foreign policy.”

But the back-and-forth with Ocasio-Cortez, the freshman Democratic congresswoman from New York City and a rising star among progressives, began last week when she tweeted that Biden’s upcoming climate plan “is a dealbreaker. There is no 'middle ground' w/ climate denial & delay.”

Ocasio-Cortez spoke at an event hosted by the Sunrise Movement, a millennial that supports the Green New Deal, a plan co-sponsored by the congresswoman that aims to transform the country’s economy to combat climate change while enacting a host of new welfare programs. One of Biden’s main rivals for the nomination – Sen. Bernie Sanders of Vermont – also attended the event and also criticized the former vice president’s efforts on the issue.

“You never heard me say ‘middle of the road.’ I’ve never been middle-of-the-road on the environment. Tell her.. to look at my record. She’ll find that nobody has been more consistent about taking on the environment and a green revolution than I have,” he spotlighted.

The former vice president pointed to his record on the issue during President Barack Obama’s administration, emphasizing “$90 billion for dealing climate change.”

Pointing to an address he’s expected to give before the end of the month on his plans to combat climate change, Biden said “you’ll hear very shortly the totality of what I plan on doing.” 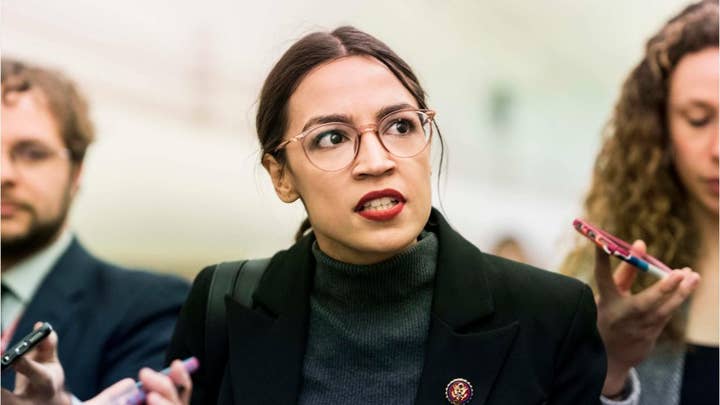 Biden – who’s perceived to be more moderate than many of his rivals in an historically large Democratic presidential field that’s far surpassed 20 candidates -- touted his progressive chops.

“I don’t yield anybody on my liberal credentials. Whether it’s on women’s issues, on LGBT issues, on speech, I have a record,” he spotlighted.

“There’s very loud voices on the very new progressive side of the agenda, and I think it’s useful,” he noted.

But Biden stressed that “the idea that somehow the Democratic Party is gone so far to the left that is not recognized by the most Democrats who consider themselves liberal is not factually what’s happening.”

U.S. ATTORNEY HAS BEEN REVIEWING RUSSIA INVESTIGATION ORIGINS FOR WEEKS

The former vice president also criticized Barr’s appointment of John Durham, the U.S. attorney in Connecticut, to investigate the origins of the Russia investigation and allegations of improper government surveillance on Trump’s 2016 White House campaign. The FBI’s investigation into Russia tampering in the last presidential election began in July of 2016, at the tail end of Biden’s eight years as vice president.

“Come one, this is like Alice in Wonderland. I don’t know where these guys are from,” he added, in a swipe against the current administration.

The president, on Tuesday, denied that he asked for Barr to launch the investigation.

“I didn't ask him to do that," Trump said at the White House ahead of his departure to Louisiana. "I didn't know it."

"But I think it's a great thing that he did it. I saw it last night, and they want to look at how that whole hoax got started," the president added. "You know what? I am so proud of our attorney general, that he is looking into it. I think it's great."

The president on Tuesday dismissed a New York Times report that his administration is planning to send 120,000 troops to the Middle East to deal with Iran.

But Trump then threatened to send more troops.

Trump then added that if he does send U.S. forces to the region, “we’d send a hell of lot more troops than that."

Biden argued that “the way to keep Iran from being a nuclear power is to stay in” the agreement hammered out during the Obama administration to prevent Iran from obtaining nuclear weapons.

“What has he done to slow up Iran at all,” Biden asked. “Now we’re going to decide we’re going to threaten a war with Iran. I mean the man has no foreign policy.”

Biden spoke with reporters during his fourth campaign stop on a two-day swing through New Hampshire. It's the first trip to the first-in-the-nation presidential primary state by the former vice president since launching his White House bid in late April.