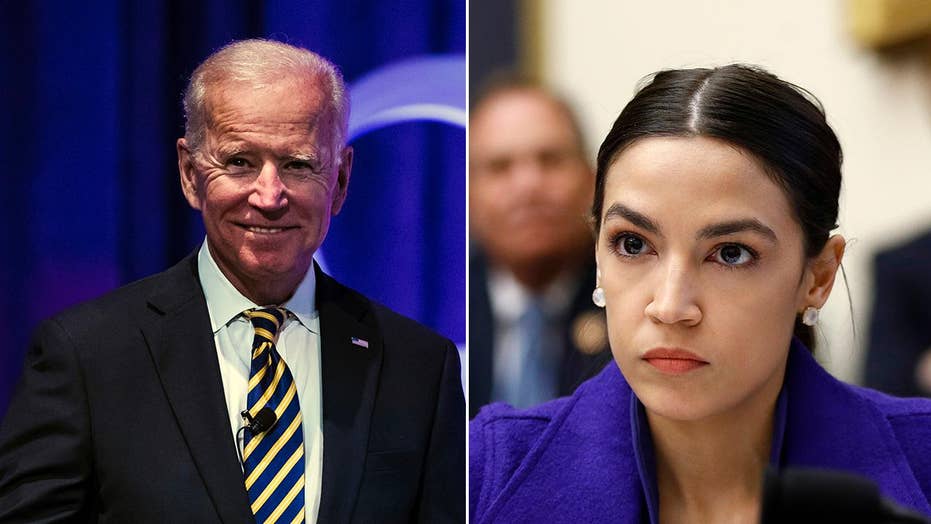 The New York Democrat joined environmental groups Friday in attacking Biden amid a report that his climate change plan will strike a less alarmist tone and won’t commit to a radical transformation of the economy.

“This is a dealbreaker. There is no 'middle ground' w/ climate denial & delay,” tweeted Ocasio-Cortez, who earlier this year introduced the Green New Deal, a far-reaching proposal to combat climate change.

“Blaming 'blue collar' Americans as the main opponents to bold climate policy is gas lobbyist 101,” she added. “We’re not going to solve the climate crisis w/ this lack of leadership. Our kids’ lives are at stake.”

According to Reuters, Biden’s plan, which hasn’t yet been released, aims to appeal to both die-hard environmentalists and blue-collar voters who voted for President Trump in 2016.

The core of the plan will likely include the U.S. re-joining the Paris Climate Agreement and focusing on technology and regulations to limit emissions from the burning of fossil fuels.

The leading 2020 candidate also teased his plan on social media, tweeting: “I’m proud to have been one of the first to introduce climate change legislation. What I fought for in 1986 is more important than ever — climate change is an existential threat. Now. Today.”

BIDEN BACKS HEALTH CARE FOR ILLEGAL IMMIGRANTS, SAYS 'WE HAVE AN OBLIGATION' TO PROVIDE IT

“We need policies that reflect this urgency. I'll have more specifics on how America can lead on climate in the coming weeks.”

But progressive activist and environmental groups pounced amid the report about his plan. Sunrise Movement issued a scorching statement, calling Biden’s plan “a death sentence for our generation.”

Prominent anti-capitalism activist Naomi Klein, meanwhile, tweeted: “No Joe, there is no "middle ground" on climate breakdown - there is bold, transformative action or there is sinking ground, burning ground and churning ground.”

Yet some Biden staffers have objected to Reuters’ characterizations of the plan, issuing a number of tweets arguing that Biden’s plan will be as radical as those of his more progressive opponents.

Biden “knows how high the stakes are,” campaign spokesman T.J. Ducklo said on Twitter. “As president, Biden would enact a bold policy to tackle climate change in a meaningful and lasting way, and will be discussing the specifics of that plan in the near future.”

“Any assertions otherwise are not accurate,” he added, noting in another tweet that “Reuters got it wrong.”