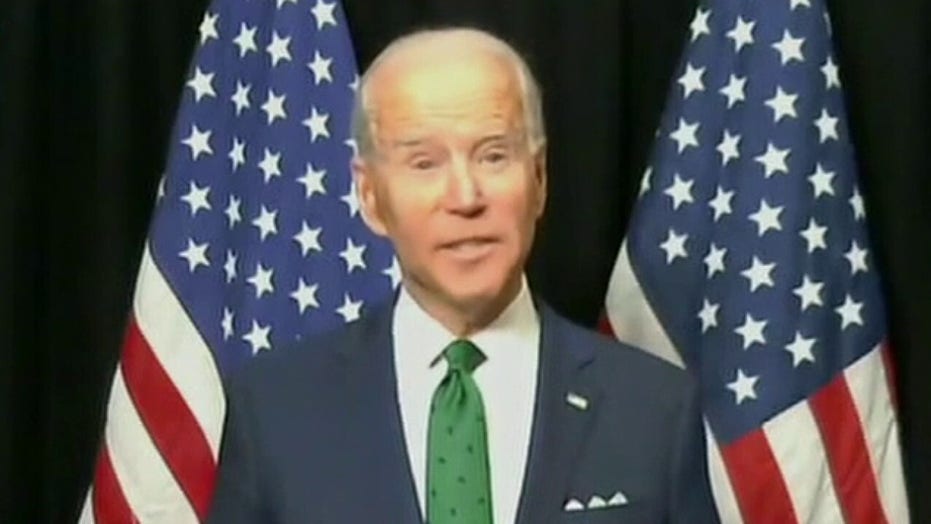 As the COVID-19 pandemic continues to expand, society’s fears about the virus are being taken advantage of with the spread of myths, hoaxes and scams. Here are some of the worst misinformation and scams about the virus that you should keep an eye out for.

Democratic presidential candidate Joe Biden on Monday praised the American people's resolve while calling on President Trump to "start to act" like the "wartime president" he says he is, in the first of what his campaign says will be regular briefings about the coronavirus threat.

Biden's remarks, livestreamed from a studio set up in his home, were short compared with the president's near-daily coronavirus briefings, lasting less than 15 minutes in total. Trump's all-hands-on-deck press conferences often run over an hour.

But the former vice president covered a range of topics including the president's coronavirus response, what he would do if he were in the Oval Office, the lessons that can be learned from governors' actions to fight the coronavirus, the Senate Republicans' stimulus proposal and a lawsuit backed by the Trump administration and Republican attorneys general to strike down ObamaCare on constitutional grounds.

Biden called on Republicans to drop that lawsuit.

"It's worth noting that today is the tenth anniversary of the signing of the Affordable Care Act. I'm proud of the role I played alongside President Obama backing him up to bring Obamacare into the law," Biden said. "But also today in the middle of one of the largest public health emergencies in generations, the White House and Republican attorneys general are actively pursuing a lawsuit to invalidate the ACA in court. They're working to strip millions of Americans of their health care and tens of millions of their protections for preexisting conditions."

He continued: "I sent a letter this morning with a simple request, withdraw the lawsuit please."

On the Senate Republicans' coronavirus response bill, Biden said it focused too much on corporate America and not enough on individuals struggling because of the pandemic. This, after Senate Democrats blocked the massive economic rescue package on Sunday, sending negotiators scrambling to reach a deal.

"As of last night President Trump and [Senate Majority Leader] Mitch McConnell were offering a plan to let big corporations off the hook," Biden said. "They proposed a $500 billion slush fund for corporations with almost no conditions. Under their plan, the Trump administration could even allow companies to use the money ... being given to them .. to buy back stocks, increase executive pays, if that's what the secretary of the treasury decided. They wouldn't have to make commitments to keep workers employed."

Biden also had some advice for Trump on his daily briefings and his coronavirus response.

He also said: “Trump keeps saying he is a wartime president, well, start to act like one. … Donald Trump is not to blame for the coronavirus, but he does bear responsibility for our response.”

Biden's move to essentially hold his own briefings amid the coronavirus pandemic is unusual, considering they are sure to offer a starkly different message than the daily briefings out of the White House during a time of national emergency. But they also come as the former vice president must keep a high profile, asserting himself as the presumptive nominee even as the numerous primary delays tied to the pandemic prevent him from officially locking down the nomination and beating lone remaining rival Bernie Sanders.

And the gaffe-prone but affable former vice president couldn't make it through the novel briefing by a candidate without one awkward moment. As he was detailing his plan to fight the coronavirus crisis, Biden appeared to lose track of his spot on the teleprompter.

He signaled to his staff that there was something wrong, before going off on an awkward ad-lib.

"And uh, in addition to that, uh in addition to that we have to make sure that we uh, we are in a position that we are, well met me go the second thing, I've spoke enough on that," Biden said before going on to speak about the aggressive action he would like Trump to take under the Defense Production Act.

Trump’s reelection campaign is firing back, accusing Biden of trying to politicize the crisis.

"By preying upon Americans’ fear amid the coronavirus outbreak, Biden isn’t just playing cheap politics. He’s making the crisis worse. It’s dangerous,” the campaign said in an email. "Biden's Monday morning quarterbacking is an effort to sow anger and division among Americans."

Biden on Monday also criticized Trump for not warning Americans urgently enough and acting fast enough to fight the coronavirus, citing his own comments about the coronavirus on Jan. 27.

"The mindset that was slow to recognize the problem in the first place, to treat it with the seriousness it deserved, is still too much a part of how the president is addressing the problem," Biden said.

Biden then sounded the alarm on the need for work on treatments and vaccines for the coronavirus, employing the Defense Production Act to get masks and ventilators to health care professionals caring for those sick with the coronavirus, stepping up testing and more — mostly along the lines of recommendations he made in a detailed coronavirus response plan over a week ago.

Above all, Biden's address seemed aimed at making him seem like the adult in the room — the experienced statesman who has dealt with this before and can unite the country around a common cause.

"When we've stood as one, this nation has never ever been defeated... and we're not going to be defeated now," Biden said. "The pandemic of 1918, the Great Depression, two world wars, we overcame them all. And out of each crisis we emerge stronger, and we will again. This new enemy may be unseen, but we have the tools, the expertise and most importantly the spirit to defeat it."