Will Medicare-for-all fare better than the Green New Deal?

Sen. Bernie Sanders', I-Vt., newly unveiled ‘Medicare-for-all’ plan, backed by a host of other 2020 Democratic presidential hopefuls, would open the door to giving health care to illegal immigrants -- a marked left-wing departure from past proposals for healthcare reform.

The legislation, unveiled by Sanders this week, and signed onto by Sens. Kirsten Gillibrand, N.Y., Kamala Harris, D-Calif., Cory Booker, D-N.J., and Elizabeth Warren, D-Mass., does not speak directly about immigrants but refers to covering U.S. “residents” instead.

BERNIE SANDERS UNVEILS MEDICARE FOR ALL PROPOSAL, SUGGESTS ROLE OF HEALTH CARE INSURERAS WOULD BE REDUCED TO 'NOSE JOBS'

Both Sanders’ bill in the Senate, and a corresponding House bill introduced by Reps. Pramila Jayapal, D-Wash., and Debbie Dingell, D-Mich., would extend coverage to every U.S. resident -- a shift from the Affordable Care Act, which limited benefits to citizens, nationals and “lawfully present” immigrants. The House bill also prohibits the government from denying benefits because of "citizenship status."

While the Health and Human Services Secretary is given the task of defining residency, the federal government is tasked with taking steps to ensuring that “every person in the United States has access to health care, The Washington Examiner notes.

Sanders told CBS News' Ed O'Keefe, that his bill "guarantees, like every other major country on Earth, health care to every man, woman and child in this country."

He told The Washington Post: "My plan would cover every U.S. resident."

HOW DID BERNIE SANDERS MAKE HIS MONEY? A LOOK AT HIS WEALTH AND ASSETS

Such provisions are not new for Sanders, who has in the past pushed plans that would not exclude those in the country illegally. But it does mark a change for the 2020 field as a whole, which has moved dramatically to the left. Sanders’ bill would also mostly abolish private health insurance. Some estimates put the cost up to $32 trillion over the next decade.

Neither the House nor the Senate bill is likely to be made law while Republicans control the Senate and the White House. Republicans would almost certainly oppose either bill as a bloc, but even on the Democratic side, the plan could face significant resistance. 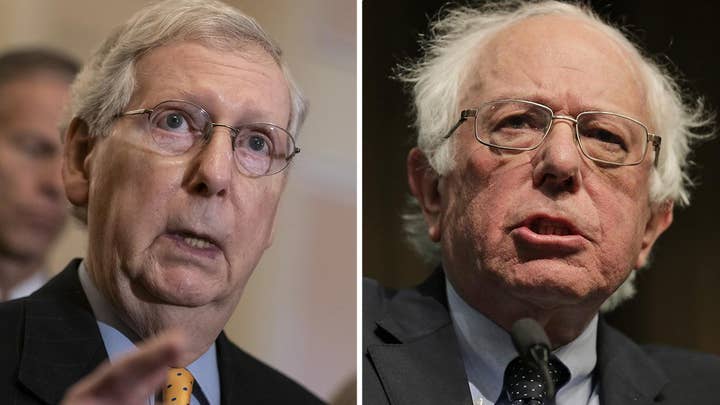 House Speaker Nancy Pelosi, D-Calif., said in February that Medicare-for-all” may not be “as good a benefit as the Affordable Care Act.”

“It doesn’t have catastrophic [coverage] -- you have to go buy it. It doesn’t have dental. It’s not as good as the plans that you can buy under the Affordable Care Act,” she told Rolling Stone in an interview. “So I say to them, come in with your ideas, but understand that we’re either gonna have to improve Medicare — for all, including seniors — or else people are not gonna get what they think they’re gonna get,” she said. “And by the way, how’s it gonna be paid for?”

As to the broader concept of a single-payer plan, she put the cost at $30 trillion and asked: “Now, how do you pay for that?”

Sen. Chuck Schumer, D-N.Y., expressed skepticism this week, saying it was just one of several proposals the party is considering: "Different Democrats have different ways to get there."

But the pushback from Democratic leadership has not stopped the shift left by both House freshmen and 2020 presidential candidates, particularly on the thorny topic of illegal immigration.

Former San Antonio Mayor Julian Castro has called for illegal immigration to be treated as a civil, rather than a criminal matter. Meanwhile Gillibrand, as part of her call for “comprehensive immigration reform,” suggested that she wants to expand Social Security to those in the country illegally.

"First, we need comprehensive immigration reform," she said last month in Iowa. "If you are in this country now you must have the right to pay into Social Security, to pay your taxes, to pay into the local school system and to have a pathway to citizenship. That must happen."