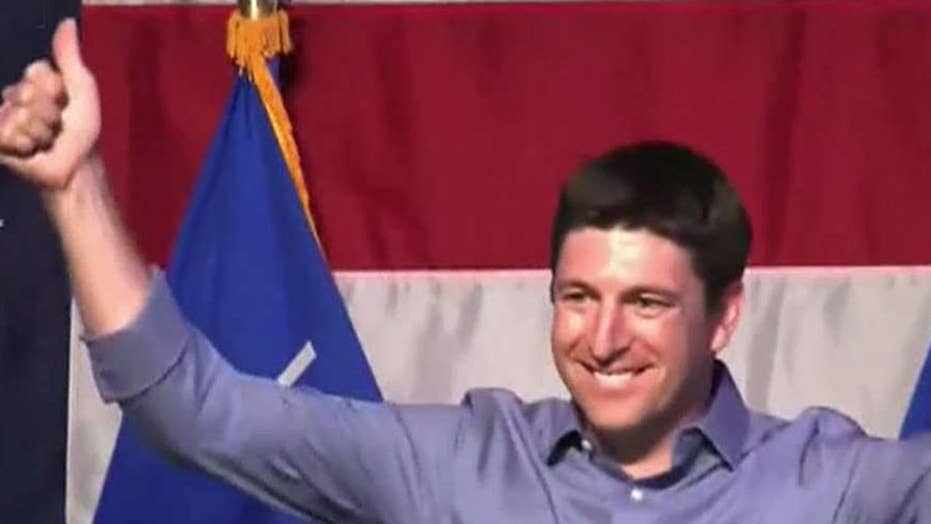 Four states held primaries on Tuesday as Democrats hope to make a push in November's midterm elections to regain control in Washington.

On the Democratic side, 66-year-old cancer survivor and state superintendent Tony Evers defeated nine other candidates with 41.75 percent of votes.

Walker, seeking his 3rd term, will square off with Evers come November.

Randy Bryce, a union worker known as “Iron Stache,” won the Democratic party’s primary on Tuesday to replace a seat held by Republican House Speaker Paul Ryan for 20 years. He defeated challenger Cathy Meyers with 59.58 percent of the vote.

Bryan Steil, a former Ryan aide, defeated five other challengers with 51.58 percent of the vote to earn the GOP bid as Republicans hope to keep the long-held seat red come November.

Johnson, who was considered an underdog in Tuesday’s primary, will now face Democratic U.S. Rep. Tim Walz, who secured the bid on the Democratic side, in the midterm elections in the Fall.

State Sen. Karin Housley secured the GOP nomination and will face Smith in the midterms.

In Minnesota’s other U.S. Senate Race, incumbent Amy Klobuchar cruised to victory beating out four Democrats to square off with the GOP's endorsed candidate, state Rep. Jim Newberger, in November.

Somali-American legislator Ilhan Omar won the Democratic Party’s nomination a congressional race in Minnesota’s 5th District, and could become the first Somali-American elected to Congress if she wins in November.

Omar will face Jennifer Zielinski, who earned the GOP’s nomination.

Minnesota had a handful of congressional primaries on Tuesday:

Christine Hallquist made history Tuesday night, becoming the first transgender candidate from a major political party to be nominated for governor after defeating several Democratic challengers in Vermont’s primary.

On the Republican side, incumbent Phil Scott defeated a challenge from Springfield businessman Keith Stern in his quest to win a second term.

Hallquist, who faces a tough battle in the Fall Midterms against Scott as he is more popular with Democrats than members of his own party in the solidly liberal state, would become the nation's first transgender governor if elected.

Independent U.S. Sen. Bernie Sanders cruised to victory on Tuesday to win Vermont's Democratic Senate primary, however, he is expected to turn down the nomination as he has done in previous campaigns.

Perennial candidate Brooke Paige secured the Republican nomination Tuesday in the Vermont primary for the U.S. House, and will face Democratic nominee Peter Welch, who is seeking re-election.

Bob Stefanowski, who dubbed himself Bob the Rebuilder, delivered a stunning upset in the Republican primary for governor in Connecticut on Tuesday by defeating the party’s endorsed candidate, veteran Danbury Mayor Mark Boughton.

The former GE executive also beat out a handful of other GOP challengers to face off with wealthy businessman, Democrat Ned Lamont, who secured the nomination on the Democratic side, in November.

Christopher S. Murphy was uncontested in Tuesday’s U.S. Senate primary race in Connecticut to win the Democratic nomination, and will face Matthew Corey, who won the primary on the Republican side, in the Fall.

Jahana Hayes, a onetime teen mother who became a celebrated teacher, won the Democratic nomination in a handful of congressional primaries in Connecticut on Tuesday.

The National Teacher of the Year award recipient from President Barack Obama in 2016 will now face Republican Manny Santos, a former mayor of Meriden, in the November midterm election to see who replaces the seat currently held by Rep. Elizabeth Esty, who didn't seek re-election following backlash over her mishandling of a sexual harassment case in her office.

The other congressional primaries in Connecticut on Tuesday include: