President Trump tore into Democratic presidential candidate Joe Biden as “Sleepy Joe” while in Iowa on Tuesday and said the former vice president reminds him of running against “Crooked Hillary” in 2016.

On the other side of the state, at about the same time, Biden said the Trump presidency “has got to end,” after labeling the president an “existential threat to America” earlier in the day.

In what could be a preview of next year’s general election campaign for the White House, both Biden and Trump took repeated, personal swipes at each other during dueling political events in different Iowa communities on Tuesday afternoon.

The two again spoke separately at dueling events later in the evening in the state.

“He was someplace in Iowa today and he said my name so many times, people couldn’t stand it anymore,” Trump said of Biden during a speech on renewable energy in Council Bluffs.

The president hit Biden for visiting Iowa “once every two weeks,” mocking the former vice president for repeatedly mentioning his name.

“That reminds me of Crooked Hillary,” Trump said. “She did the same thing.”

At a GOP fundraiser in West Des Moines later in the day, Trump predicted a Clinton-like fate for his next rival.

“One of my staff showed me that apparently he had my speech on -- on Air Force One,” Biden said at Iowa Wesleyan University in Mount Pleasant. “I guess he’s really fascinated with me. I find it fascinating.”

Then later in the day, in Mount Pleasant, Biden escalated his attacks: "He embraces dictators like Kim Jong-un, who’s a damn murderer and a thug? The one thing they agree on: Joe Biden, he shouldn’t be president.” 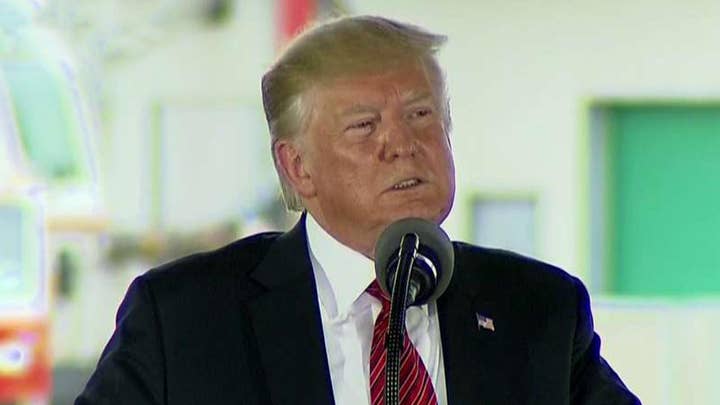 Biden also ripped into Trump for recently attacking critics while in Normandy to celebrate the 75th anniversary of D-Day.

“And he’s tweeting about Bette Midler. No. I’m not joking. He’s making personal attacks on Nancy Pelosi, who’s there with him. He embraces dictators like Kim Jong Un, who’s a damn murderer and a thug,” Biden said.

Trump called Midler a "washed up psycho" after she shared a fake newspaper clipping, which Trump is falsely quoted decades ago saying he would run for president as a Republican to manipulate voters. Midler eventually apologized.

The showdown between Biden and Trump began earlier in the day. In a free-ranging back-and-forth with reporters on the White House lawn before departing for Iowa, Trump ripped into Biden as “loser” and claimed he wants to run against the former vice president because "I think he’s the weakest mentally.”

Meanwhile, Biden, the frontrunner in the Democratic race, called the president an “existential threat to America” during a community event in Ottumwa, saying, “This is a guy who does everything to separate and frighten people.”

The back and forth is poised to continue through Tuesday, as Biden is set to hold a community event in Davenport at the same time Trump gives a speech at a state Republican Party dinner.

In Davenport, Biden is expected to use the speech to blast the Republican president for threatening tariffs on global trading partners.

According to excerpts released ahead of his speech, Biden will argue that “America’s farmers have been crushed by his tariff war with China. No one knows that better than Iowa.”

Biden will add that Trump "thinks he’s being tough. Well, it’s easy to be tough when someone else is feeling the pain.”

Spotlighting the anxiety he said farmers are feeling, Biden will ask “how many have had to stare at the ceiling at night wondering how they’re going to make it? How many sleepless nights do you think Trump has had over what he’s doing to America’s farmers?”

The president on Friday dropped the latest tariff threat as he announced that the U.S. and Mexico had reached a deal to stem the flow of migrants. 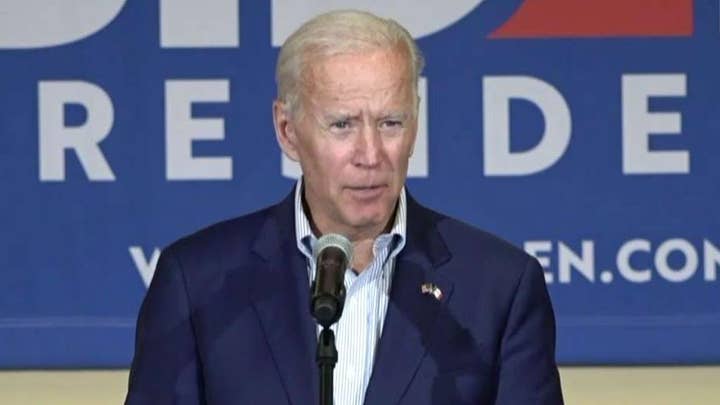 Amid criticism from Democrats, the president tweeted Monday that a “very important” part of the agreement with Mexico would be “revealed in the not too distant future.”

And, in an interview with CNBC, he said, “If we didn’t have tariffs we wouldn’t have made a deal with Mexico.”

“This is something the U.S. has been trying to get for over 20 years with Mexico. As soon as I put tariffs on the table it was done — it took two days,” he said.

The former vice president’s trip – his second to Iowa since launching his 2020 presidential campaign in late April – comes two days after he skipped the first major cattle call of the year in Iowa.

Biden took some incoming fire for missing the Iowa Democratic Party’s Hall of Fame dinner, which was held Sunday in Cedar Rapids but explained Tuesday that he prioritized attending his granddaughter’s graduation in Washington.