Biden 'derelict in his duty,' Texas has right to declare 'invasion' at border: GOP congressman

Texas Republican Jodey Arrington discusses the legality of border counties wanting to declare an 'invasion' at the southern border on 'America Reports.'

Arizona Attorney General Mark Brnovich is urging Gov. Doug Ducey to declare the crisis at the southern border an "invasion" -- just after multiple counties in Texas are pressuring their state’s governor to do the same.

"Last year, your office deployed the National Guard and declared a state of emergency at our border, but as the Biden-made disaster continues to intensify, there are more actions that we now have to consider," Brnovich said in a letter to Ducey, obtained by Fox News Digital.

Amid an ongoing and historic migrant crisis at the southern border, with more than 239,000 migrant apprehensions in May alone, states have been taking matters into their own hands after what they say is inaction from the federal government.

Brnovich noted the recent case of an illegal immigrant who was on the terror watch list, but was still released into the country, before being apprehended two weeks later.

With the state’s abilities limited, a number of conservatives have been calling for border states to declare the situation an "invasion" -- which could give them additional powers under the Constitution. This week, multiple counties in Texas declared the crisis an invasion, and urged Gov. Greg Abbott to do the same.

"We want America to know that this is real," Kinney County Judge Tully Shahan told reporters. "The Biden administration won't do a thing about it. They could stop this thing this hour. They could stop it now. They don't have the guts."

Multiple lawmakers at the national level have come out in support of the move, including Arizona Rep. Andy Biggs, who said: "Arizona must declare an invasion at its southern border."

7.6.22 Brnovich Letter to Ducey by Fox News on Scribd

The call for invasion declarations has been promoted since last year by former Office of Management and Budget (OMB) Director Russ Vought and former acting deputy DHS Secretary Ken Cuccinelli, both now at the Center for Renewing America. They have cited language in Article I of the Constitution, which allows for States to "engage in War" when it has been "actually invaded, or in such imminent Danger as will not admit of delay" without the approval of Congress.

TEXAS COUNTIES ON THE BORDER AND BEYOND DECLARE ‘INVASION': BIDEN ADMIN DOESN'T ‘HAVE THE GUTS’ TO ACT

Brnovich, in February, issued a legal opinion declaring the crisis an invasion and finding that it authorized the state to take matters into its own hands -- but only if the governor made the declaration. 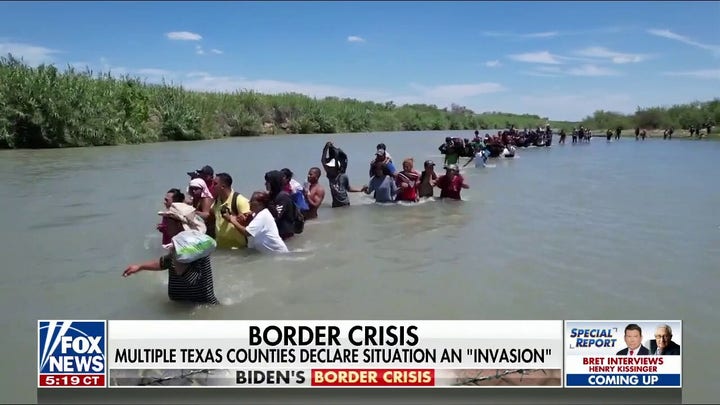 "Our office concluded that violence by cartels and gangs who have now assumed control of our southern border meets the legal definition for an invasion, but it’s up to the Governor to make that actual determination," Brnovich, who is also running for U.S. Senate, said in the letter. "If that happens, you, as Commander in Chief, can exercise independent authority under the State Self-Defense Clause of the Constitution to defend Arizona from the invasion."

"The truth is that we have every indication that the border crisis will continue to escalate," he said. If there is more that we as a state can and should do, it can be pursued with your declaration of an ‘invasion’ at our southern border."

Ducey’s office in February had responded to Brnovich’s declaration by noting the efforts the state had taken to address the crisis, including its Border Strike Force, National Guard, and partnership with local law enforcement.

"Governor Ducey deployed the National Guard to the border last April, as we faced a rapid increase in apprehensions. He extended the border security mission for another year in August to give our law enforcement the support they need to fight this criminal activity," Communications Director CJ Karamargin said.

"The number of people and drugs we have seen come across our border this year is unprecedented. DHS Secretary Mayorkas admitted himself the border is the worst it’s been in over 20 years. He needs to be held accountable. This administration needs to be held accountable. They have totally failed to address this very real public safety and humanitarian crisis," he said.

On Thursday, Vought at the Center for Renewing America welcomed the letter from Brnovich.

"Attorney General Brnovich is right to pointedly ask Governor Ducey why he has not declared an invasion after earlier this year claiming he would do everything in his power to deal with the crisis," he said in a statement to Fox News Digital.