Matthew O'Brien tells 'The Ingraham Angle' that the White House is taking a creative approach to reduce the backlog by simply not pursuing the cases and releasing these people in the interior of the United States.

Officials from several Texas counties along the southern border announced a series of emergency declarations Tuesday to recognize the growing number of migrants in their communities amid what they said was lackluster support from the federal government.

The declarations essentially recognized a state of "invasion" of illegal immigrants pouring into communities as local authorities have little-to-no resources to respond.

"We want America to know that this is real," Kinney County Judge Tully Shahan told reporters in Bracketville. "The Biden administration won't do a thing about it. They could stop this thing this hour. They could stop it now. They don't have the guts." 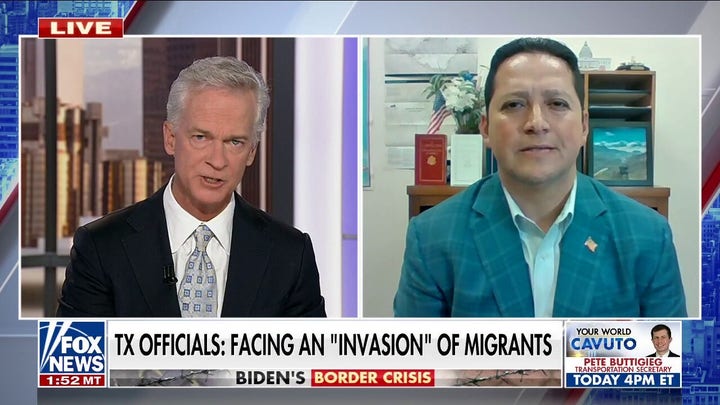 In a statement to Fox News Digital, Abbott's press Secretary Renae Eze said "All strategies remain on the table as Texas continues stepping up in the federal government’s absence."

"While President Biden ignores the ever-growing humanitarian crisis, and Congressional members visit the border for photo-ops and then return to Washington to do nothing, Texas has deployed thousands of Texas National Guard soldiers and DPS troopers and spent over $4 billion of Texas taxpayer money to secure our border, including building our own border wall, erecting strategic barriers, and sending significant resources to help our local partners as was mentioned repeatedly in the Brackettville press conference, Eze said. "This has resulted in over 274,000 migrant apprehensions, over 16,900 criminal arrests, including smugglers and human traffickers, over 22,000 turnbacks, and millions of lethal doses of fentanyl seized. It’s past time for President Biden—and for both parties in Congress—to do their jobs and secure our southern border. As the challenges on the border continue to increase, Texas will continue to take additional unprecedented action to address those challenges caused by the Biden Administration."

Some officials said unprecedented illegal immigration has resulted in property damage, stolen vehicles, gun violence and other issues resulting from migrants crossing into their counties, many of which are desolate and have sparse populations.

"In my community, we have less than 1,000 residents. The thousand residents everyday live in fear of the invasion," said Dale Lynn Carruthers, the county judge for Terrell County. "We are doing the best we can with limited manpower. Terrell County has the least to offer… but we have a lot of border coverage."

Others talked about migrants crossing through school campuses and putting lives in danger while trying to flee U.S. Border Patrol agents and local and state authorities.

In May, Kinney County law enforcement documented more than 4,000 migrants who avoided apprehension by the Border Patrol, the county said in a news release. In June, authorities there prevented 67 smuggling attempts along county roadways, officials said.

Goliad County Judge Mike Bennett said his county has two stoplights and has a sheriff's department that has two deputies on duty at any given time.

Migrants, many from Haiti, are seen at an encampment along the Del Rio International Bridge near the Rio Grande in Del Rio, Texas. (AP Newsroom)

"Clearly, it's the responsibility of the United States government to do this and clearly they're not going to do a thing," Bennett added.

With migrant numbers hitting historic levels, and with more than 239,000 migrant encounters in May alone, there has been considerable talk in conservative circles about the merits of declaring the crisis an "invasion" – which could open up a number of potential legal avenues for states.

Ken Cuccinelli, the former acting deputy secretary for the Department of Homeland Security, previously told Fox News Digital that the move by the Texas counties was significant and should now put more pressure on Abbott to make the declaration himself.

"The key here is you've got the first legal ruling that the southern border situation is an invasion," he said. " One, that's obviously very significant, and two it's going to –  as it should – put enormous pressure on Governor Abbott to adopt that position themselves and to respond accordingly."