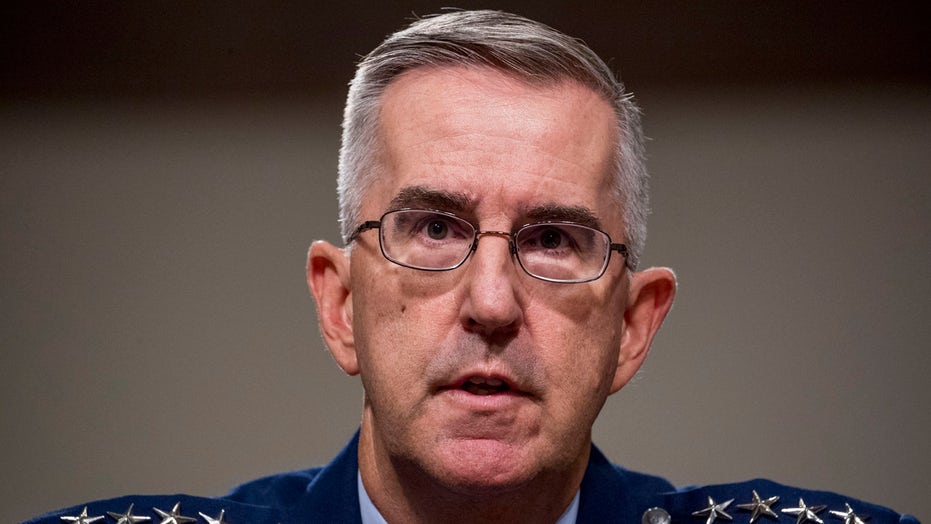 The Senate Thursday confirmed the nomination of Air Force General John Hyten to become the vice chairman of the Joint Chiefs of Staff, the second-highest-ranking military officer in the U.S., after months of delays for an investigation into sexual misconduct claims.

Hyten's former aide, Army Col. Kathryn Spletstoser, accused the general of assaulting her in a California hotel room in 2017. She said Hyten kissed, hugged and rubbed up against her while she pushed him away and told him to stop, and that he tried to derail her military career after she rebuffed him.

The Senate confirmed Hyten by a 75-22 vote, indicating a bit more opposition than most military nominations, which often get near-unanimous Senate support. The only Republican to vote "no" was Joni Ernst of Iowa, a survivor of sexual assault while in college and former reserve officer.

"It has been a painful time for me and my family, but I want to state to you and the American people in the strongest possible terms that these allegations are false," Hyten said during a committee hearing in July. "Nothing happened, ever."

A separate Air Force investigation found no evidence to support the accusations. Officials told Fox News Spletstoser had leveled various accusations against at least a dozen other military officers in recent years, none of which were substantiated. Spletstoser has said she never made any sexual assault allegations against anyone else.

Spletstoser said she believes Hyten's confirmation proves the military is still unequipped to handle sexual assault cases. "The process for seeking justice has been a sham; I have not had the opportunity to tell my story publicly and have been subject to a rushed and incomplete inquiry overseen by an officer junior in rank to General Hyten. I received a military protective order - the equivalent of a civilian restraining order - against General Hyten in May after he exhibited threatening behavior, including stalking," she said in a statement.

Officials said Spletstoser had been fired from her job under Hyten’s command running the U.S. military’s nuclear arsenal a few months after the alleged incident occurred for creating a “toxic” work environment and “bullying” subordinates while displaying a “volcanic temper.”

POMPEO ACCUSES SYRIA OF USING CHEMICAL WEAPONS IN MAY ATTACK

It was Spletstoser’s behavior under Hyten that led Ernst to question Hyten’s nomination during the hearings.

“There are professional responsibilities associated with being such a high ranking leader and that is to make sure that those within your command are following your directive and not engaging in toxic leadership," she said. "So this leaves me with concerns about your judgment and ability to lead in one of the highest positions in the U.S. military."

However, another Colonel who served under Spletstoser's command in Korea from 2011-2013 spoke highly of her moral character. "Kathy was an awesome commander and an officer that you could depend on in good or bad times," said Col. Loi M. Nguyen. "If she were to lead us into combat in the future, I would be happy to serve with her because of her competency, candidness, and high moral character," he added.

Others voting "no" Thursday included two Democratic presidential candidates Kamala Harris of California and Amy Klobuchar of Minnesota; former presidential candidate Kirsten Gillibrand of New York, who has made military sexual misconduct one of her top issues in the Senate; and Tammy Duckworth of Illinois, an Iraq War veteran who lost her legs when her helicopter was shot down.

But Hyten received support from Sen. Martha McSally, R-Ariz., a former fighter pilot who has publicly described her own sexual assault that she says occurred while she was in the military.

"To be clear, this wasn’t just a jump ball. Not a he-said, she-said," McSally told the Senate Armed Services Committee in July. "Not a situation where we just couldn’t prove what allegedly happened. I believe the truth still matters in our country. And the full truth was revealed in this process.

The truth is that General Hyten is innocent of these charges," McSally went on. "Sexual assault happens in the military. It just didn’t happen in this case.

"Today's Senate confirmation of Gen John Hyten to be the Vice Chairman of the Joint Chiefs of Staff is good news for our military and good news for our nation," said Air Force Chief of Staff Gen. David F. Goldfein. "John Hyten is the leader, strategist, and above all an individual with the character and values to lead our men and women in uniform well."

Marine Gen. Joseph Dunford, chairman of the Joint Chiefs of Staff, congratulated Hyten, calling him a “visionary leader with an unparalleled strategic perspective.” Dunford is retiring next Monday after four years on the job, so Hyten will be serving under Army Gen. Mark Milley.

Hyten has served in the Air Force for nearly four decades and most recently headed U.S. Strategic Command, which controls America's nuclear force. He also led Air Force Space Command and served as mission director at Cheyenne Mountain in Colorado, the military's iconic defense bunker during the Cold War.

The Associated Press and Lucas Tomlinson contributed to this report.