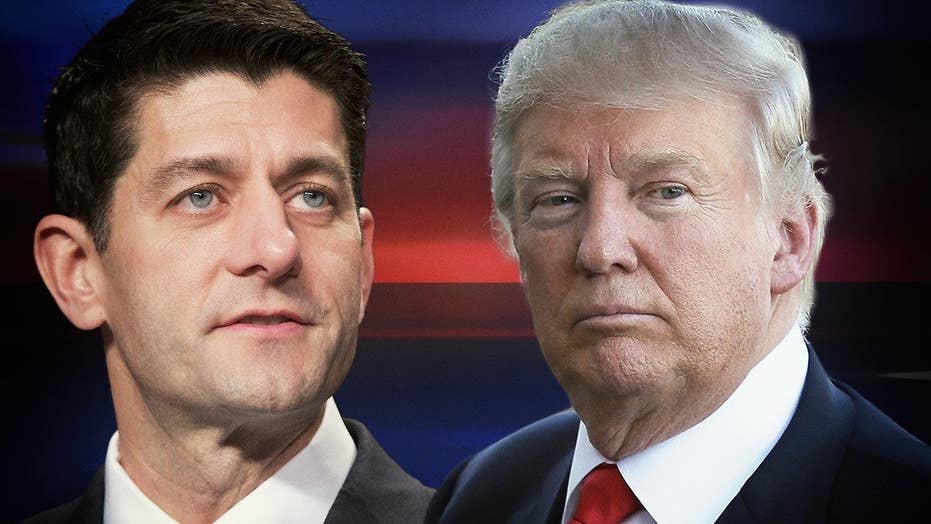 The House speaker raised the importance of party unity; John Roberts with the Republican roundup for 'Special Report'

“This must be Thursday. I could never get the hang of Thursdays.” – Douglas Adams’ character Arthur Dent in "The Hitchhiker’s Guide to the Galaxy"

Getting the hang of Thursday poses questions today at the Capitol. Is the day’s focus the House’s scheduled debate on the Comprehensive Opioid Abuse Reduction Act of 2016? Or is the essence of Thursday the triumvirate of conclaves presumptive Republican presidential nominee Donald Trump holds with House Speaker Paul Ryan, R-Wis., and other senior congressional Republicans?

Ryan’s office tried to get a hang of Thursday on Tuesday when aides messaged reporters about the opioid legislation.

“You should know that Thursday’s Ryan/Trump meeting is not the most important thing happening in DC this week,” read the memo. “So while politics may have your attention right now, we hope you'll have time to review and write on this important and thoughtful action the House is about to take to tackle the disturbing opioid epidemic.”

On Wednesday, Ryan himself efforted the hang of Thursdays at a press conference.

“I know some of you are here about a meeting that's happening tomorrow,” Ryan told the scribes before arguing that the opioid measure should command more headlines than his confabs with Trump. “That's what this week is about.”

This isn’t to diminish the importance of the opioid legislation. But when you’re the speaker of the House … and Donald Trump is on target to be the nominee … and you’ve signaled you’re not ready to back him … and many members of your party harbor reservations about Trump … and then you say you’d be willing to forgo the chairmanship of the Republican convention in Cleveland if you and Trump don’t get along …

The speaker didn’t rush to back Trump right away once Sen. Ted Cruz , R-Texas, and Ohio Gov. John Kasich bowed out of the presidential sweepstakes -- essentially handing the nomination to the New York businessman. Ryan’s sought to stay out of the presidential minefield. But the speaker pointedly called out Trump twice. A stern Ryan criticized Trump after he advocated banning all Muslims from entering the U.S. Later, Ryan took Trump to task after he was slow to disavow white supremacist David Duke.

A source familiar with the speaker’s thinking said both episodes “really stuck in Ryan’s craw.”  And no, after Thursday’s meetings with Trump, Ryan won’t be walking around the Capitol humming “Friday, I’m in Love” by The Cure. Fox News is told Ryan won’t rush to endorse or even distance himself from Trump after Thursday’s sessions.

But Thursday is really about Tuesday. A Tuesday in early November.

“To pretend we’re unified without actually unifying, then we go into the fall at half-strength,” said Ryan about today’s huddle.

Many are trying to divine the meaning of Ryan’s maneuvers with Trump. There’s a lot of Monday morning quarterbacking as to what Ryan is really up to.

Here are a few ideas, cobbled together from Republican lawmakers, senior GOP aides and other political sources:

“I commend Speaker Ryan for having the courage to not just fall in line,” said Curbelo. “I think what the Speaker is trying to do is ask and understand what are Mr. Trump’s goals.”

Other Republicans are seeking clarity from Trump.

“Donald Trump has said different things at different times that seem contradictory. We want to make sure [his ideas] fit with what we conservative Republicans believe,” said Rep. John Fleming, R-La. “There were people who didn’t like [Sen. John] McCain or [Mitt] Romney, but got behind them. We should have the same attitude with the nominee here.”

That means there’s a lot of work ahead to get Republicans behind Donald Trump.

Rome wasn’t built in a day. Trump won’t garner foursquare Republican support in a day either – whether it’s a Thursday, a Manic Monday, a Pleasant Valley Sunday, a Ruby Tuesday or a Freaky Friday.

But when it comes to Trump and the GOP, everyone’s trying to get the hang of Thursday. And finding unanimity may take a month of Sundays.