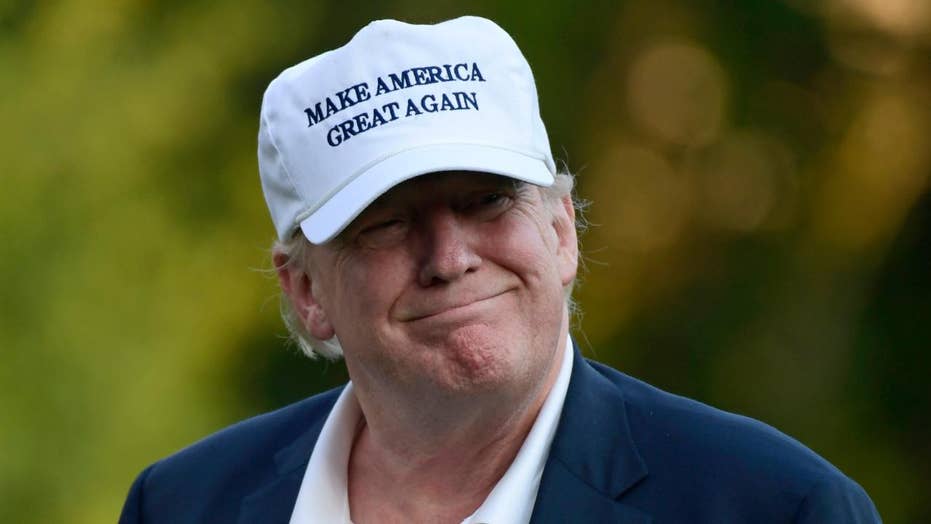 Is Trump's victory lap on the economy deserved?

Economist Peter Morici reacts to criticism from the left on 'Fox & Friends First.'

President Trump’s opponents may not like his philandering past and midnight tweets but on the economy, only cynics can argue with the results.

The economy accomplished 4.2 percent growth in the second quarter and appears headed for an overall score of 3 percent for the entire year. A tight job market is finally rewarding workers with better treatment from employers, and low wage workers are receiving bigger pay boosts.

That’s a lot better than the less than 2 percent average growth and stagnant living standards recorded by Presidents Bush and Obama.

The big challenge for Mr. Trump and the Republicans in Congress—should they hold on in the midterms—is sustaining the pace. With unemployment already at 3.9 percent, most economists are pessimistic about continued 3 percent growth in 2019 and beyond.

The labor market still has lots of excess capacity among young people stuck in low level jobs in restaurants and other service businesses. Many of those positions hardly require the skills of a college education or provide high school graduates with a decent career track.

To keep growth in high gear, businesses have to follow through by adding to training budgets and the many private apprenticeship programs that the Department of Labor certifies and helps young folks identify. The latter are not just in traditional building trades but also in technology, manufacturing and business services. Many pay about $15 an hour during training and average starting salaries of $60,000 for those who successfully complete programs.

President Trump is establishing an advisory council comprised of corporate, nonprofit, state government and educational leaders that will work to implement results-oriented job training programs in classrooms and workplaces.

Too many high schools dropped traditional vocational programs in recent decades under pressures from tight budgets and to channel students to college. Mostly that resulted in lots of young people who dropped out after a year or two or graduated from a degree program that did not adequately prepare them for the jobs market. The resulting burden of debt, especially for minorities, too often is overwhelming.

Job one for the president’s council should be getting more young people steered from college track and into vo-tech and apprenticeships, and incentivizing states to redirect funds now going to useless university programs back into those areas.

Finally, regulation has to make sense—not just for America but for the broader world.

Suspending disbelief about the missions of the Paris Agreement on Climate Change and the World Trade Organization, the bottom line is that American compliance doesn’t mean much if other nations are permitted to violate the rules or intent of those agreements.

Handcuffing American industry does little good if Chinese emissions are growing in leaps and bounds and India and other developing nations are simply not adhering to the same standards as western economies. Until they are, more sensible regulations for U.S. auto efficiency and overall emissions standards are in order.

President Obama rushed through higher gas mileage standards after to his horrors Hillary Clinton lost the 2016 election to Mr. Trump. Consequently, freezing CAFE standards at their target for 2020—fleet averages at about 37 MPG—instead of going all the way to 50 MPG in 2025 would be prudent, and Mr. Trump has initiated the necessary public comment processes.

High tariffs on trade with China should not be our end goal but we simply can’t go on destroying millions of jobs and permitting Beijing’s bureaucrats to coerce American companies to transfer valuable technology in frontier areas like artificial intelligence and robotics.

If China can’t play by the rules of civilized nations, then trade with China must be managed outside the WTO so that we may preserve the global body for trade among western nations.

These are radical changes in policy that will reach deeply into our schools and affect relations with partners abroad but are necessary to provide Americans with a secure and prosperous future.