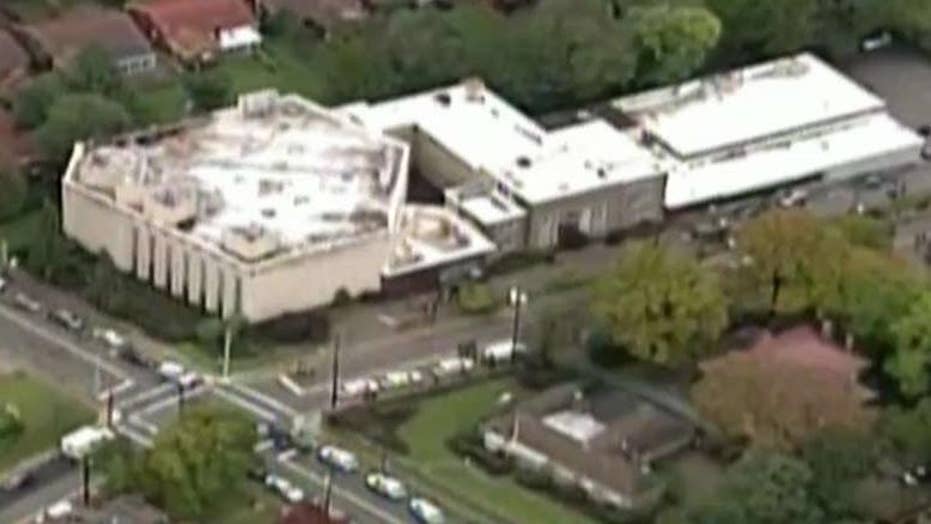 The Anti-Defamation League recorded a total of 1,879 attacks against Jews and Jewish institutions across the country in 2018, the third-highest year since the ADL started tracking such data in the 1970s; Laura Ingle reports.

American Jews have much to be thankful for this Thanksgiving – but they also have reason to fear worsening anti-Semitism by a growing minority of Americans.

As a result, more and more American Jews feel endangered and unwelcome in their own country.

Earlier this month over 70 headstones were overturned in a Jewish cemetery in Nebraska.

There were multiple attacks on the Orthodox Jewish community in Brooklyn in New York City.

Some 20 percent of American Jews – more than 1 million people – have said that they have personally been a target of anti-Semitic remarks within the last five years.

And hard as it is to believe, growing numbers of Americans and Europeans – particularly young people – say they haven’t even heard of the Holocaust, or think the death toll was far fewer then the real figure of 6 million Jews murdered.

You would think young people would be less influenced by the ancient prejudice of anti-Semitism than their elders. But in fact, anti-Semitism is particularly bad on some college campuses, cloaked as opposition to Israeli policies toward the Palestinians. But in truth, you cannot claim to hate the Jewish state and be a friend of the Jewish people.

Former Senate Majority Leader Harry Reid, D-Nevada, observed earlier this year that throughout his decades of public service there were occasions when anti-Semitic sentiments were on display, but “it was clear we were moving in the right direction.” He wrote in an op-ed in Newsweek: “I can't recall witnessing any overt anti-Semitic acts or incidents during my travels.”

Then Reid lamented: “Sadly, this is no longer the case.”

It is also no longer the case within Reid’s own Democratic Party, where freshmen House members Ilhan Omar of Minnesota and Rashida Tlaib of Michigan have employed anti-Semitic rhetoric once unthinkable in the party that long enjoyed the greatest support from the American Jewish community.

In fact, the American Jewish Committee’s recent survey conducted among Jews in America makes it clear that life is unraveling for them. The survey found that:

84 percent of American Jews say anti-Semitism is on the rise in the U.S

31 percent of American Jews are now afraid to wear anything that demonstrates their Jewish faith in public.

One in four Jews now admits there are events and situations they avoid, fearing for their safety in the U.S.

One-third of respondents said the Jewish institutions they are affiliated with have experienced some form of anti-Semitism, ranging from anti-Semitic graffiti to threats of attack.

People of my faith – a peaceful people with a religious tradition dating back millennia – should not be fearful to wear a Star of David around their necks in public in the United States.

There is a great deal of focus on the threats against Jews in Israel, where I live. Just a few days ago, Jewish families in southern Israel were attacked with hundreds of rockets fired by Palestinian terrorists from the Gaza Strip.

And anti-Semitic incidents are spreading like a cancer across Europe, where the Holocaust took place.

The horrors of the last century should have made anti-Semitism nearly unthinkable. Yet, I’m sad to say that even in the United States there is now a need to be more vigilant. I am calling upon Christian friends of the Jewish community to intentionally stand in the gap.

This is why we at The International Fellowship of Christians and Jews – the organization I head -- are helping to provide increased security at synagogues around the world with the help of our Christian friends and law enforcement authorities.

There is a real danger of forgetting the past. As the Elie Wiesel, the late Holocaust survivor, wrote in his book “Night”: “To forget would be not only dangerous but offensive; to forget the dead would be akin to killing them a second time.”

In America, of all places, the Star of David ought not to be a target on the backs of Jews.

Yael Eckstein is the president and CEO of the International Fellowship of Christian and Jews. In this role, she also holds the rare distinction of being a woman leading one of the world’s largest, religious not-for-profit organizations, having raised $1.8 billion — mostly from Christians — to assist Israel and the Jewish people. She is the author of the book “Generation to Generation: Passing on a Legacy of Faith to our Children.”