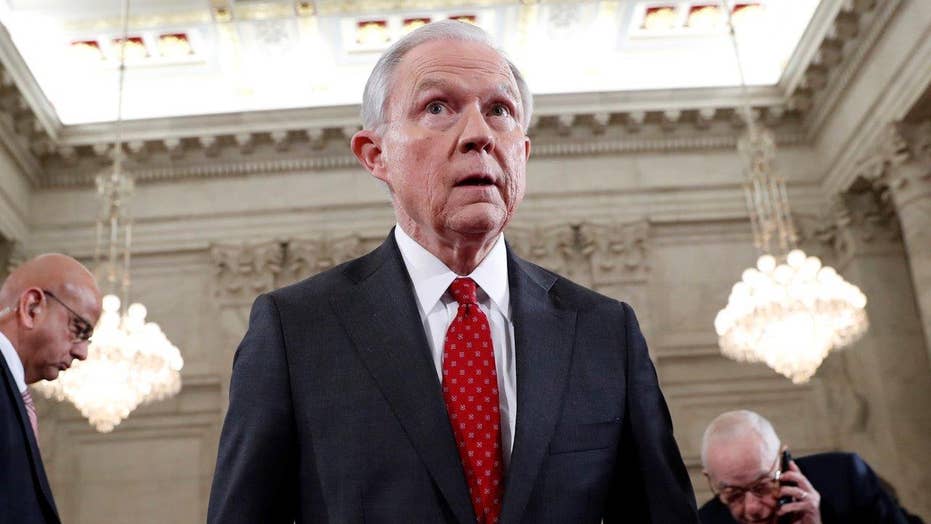 Sen. Sessions promises to enforce the law if confirmed

“There was one moment in Jeff Sessions’ confirmation hearing,” writes Slate’s Dahlia Lithwick, “that revealed why so many are so terrified of him.”  Lithwick deemed this moment so inflammatory that she called it “reprehensible” and “gobsmacking.”  Somewhat more restrained, Politico’s Seung Min Kim and Josh Gerstein said it was “head-scratching.”

What was this extraordinary occurrence?

Had Donald Trump's nominee for attorney general of the United States embraced the notion of a terrorist state like, say, Iran having nukes? Was he in favor of packing the electorate with illegal immigrants and thus changing the electoral landscape forever? Had he admitted to using a private server for thousands of classified documents? Perhaps he voiced his support for abortion-on-demand, thereby adding to the more than 50 million children that have been terminated since Roe v. Wade?

Of course, not. Senate Democrats and their media allies see none of these things as “reprehensible” (as they certainly are).  No, the “gobsmacking” moment was when Senator Sheldon Whitehouse of Rhode Island asked Sessions:

“A secular person has just as good a claim to understanding the truth as a religious person, correct?”

Sessions, transparent in his beliefs, replied doubtfully: “Well, I’m not sure.”

This moment, preserved in C-Span amber for all eternity, was, according to Lithwick, one that demonstrates “why Democrats are rightly very, very afraid.”

Afraid? Let’s examine this exchange for a moment and the historically valid and entirely rational reason for the Alabama senator’s skepticism.

In 2011, I published my first book "The Grace Effect." The book is chiefly the powerful story of our remarkable adopted daughter, Sasha, who was abandoned at birth and, until the age of eleven, was raised in Ukrainian orphanages where children suffered material, intellectual, and spiritual deprivation in the extreme. I give the reader a glimpse of that world through Sasha’s eyes and experiences, exploring a larger question:

How are we to account for the fact that in some parts of the world there is a higher regard for human life, dignity, freedom, property, and the Rule of Law than in others?

Is it education? Wealth? ObamaCare?

None of the above.

Indeed. A given philosophy, creed, or religion will either restrain our darker impulses or exacerbate them, but escape them we cannot.

These days there is a lot of talk about religion—Christianity in particular—and its role in public life. Whether it is protesting nativities, the push to remove “In God We Trust” from our currency, or prayer in public schools, Christianity in America is under siege.

The secular elites argue that the religion is a bit like smoking: It is harmful, but if you must do it, do it in the designated areas only.

Apparently, a senate confirmation hearing is no place to light-up.

But Senator Sessions read my book shortly after its publication and liked it very much. He knows Sasha’s story. He knows that she suffered at the hands of a godless bureaucracy that did not regard people as beings made in the image of God and therefore of intrinsic value, but instead believed them to be an accident in space and time and just so much raw material for the construction of the superstate.  Indeed, the only absolute was the state itself.

As a student of history, no doubt Senator Sessions also knows that secular regimes, lacking any belief in laws beyond those they manufacture, alter, and violate at will, were responsible for the deaths of no less than 100 million people in the Twentieth Century alone.

That’s more than all religious wars from all previous centuries combined.

That is because atheism unquestionably exacerbates the evil in our nature. And if Christianity doesn’t make you good—strictly speaking, from a theological perspective, none of us are—it makes you better than you might otherwise be.

I am reminded of novelist Evelyn Waugh’s famous quip, made in response to someone drawing attention to his all-too-obvious faults: “Without supernatural aid, I would hardly be a human being.”

All of this is at the heart of the Senator’s remarks: If one does not believe in a Lawgiver, how can we be sure he will acknowledge any law at all? The point isn’t that the secularly-minded cannot be morally outstanding people; the point is that there is no logically compelling reason to be anything other than entirely selfish.

I mean, if there is no God to judge you in the next life for your actions in this one, why not do preciously as you want to do?

Americans should be comforted by the knowledge that the man who might become the highest law enforcement officer in the country believes that some laws are absolute and inviolable no matter what the cultural zeitgeist of the moment is; because sometimes the zeitgeist says slavery is OK and Jews should go to concentration camps.

In his farewell address in September of 1796, Washington offered this warning:

“And let us with caution indulge the supposition that morality can be maintained without religion. Whatever may be conceded to the influence of refined education on minds of peculiar structure, reason and experience both forbid us to expect that national morality can prevail in exclusion of religious principle.”

Washington was not simply playing to the masses by tossing them this morsel of religious rhetoric. He was referring to a dangerous European experiment, the French Revolution, which sought the destruction of the Church and institutionalized atheism. The experiment was a failure. What followed was regicide, civil war, and the Reign of Terror.

The Cultural Left’s romance with secularism is naïve at best, malicious at worst. History demonstrates where that worldview all too often leads.

The moral and intellectual sensibilities of the West are still running off of the accumulated capital of a rich Judeo-Christian heritage.

But watch out. When the fumes in that tank are spent, tyranny cannot be far away.