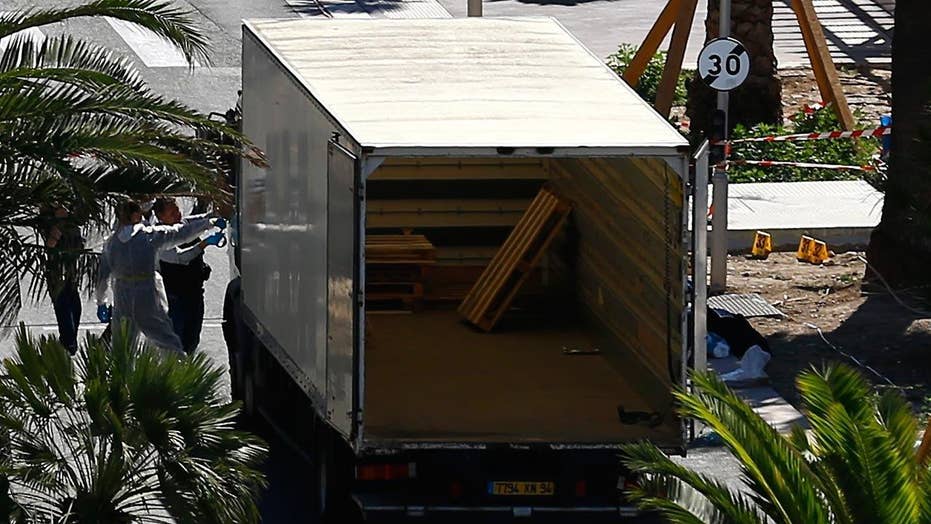 The search for answers continues after terror attack in Nice

France becomes the victim of another attack as citizens feel Hollande has done little to protect them; Benjamin Hall has the details for 'Special Report'

The murder of 84 people and wounding of hundreds more in Nice on Thursday is a passing of the torch.  It is the third major terrorist attack against France in a year and a half, after the massacres at Charlie Hebdo and the Stade de France, and the tenth one total.  The 9/11 era is over: today, France is ground zero.  It is caught in a perfect storm of radical Islam’s loathing, envy, and opportunity.

The war between the radical Islam and the West is at its root a war of symbols, and France represents everything the extremists hate about the West. The French love their wine and food, five-hour workdays and mistresses on the Riviera.  There is a laissez-faire enjoyment of life in France that is unique even by Western standards of contentment. The French life is by definition a successful objection to the retrograde medievalism offered by ISIS. That makes it a target. Unfortunately, it is an easy target.

It is a curious thing that France’s cultural hedonism is matched by a highly aggressive foreign policy. During the Cold War, when French President Charles de Gaulle withdrew France from NATO’s unified military command, America thought that France was shirking in the face of a common threat. Just like WWII, we said.  Can’t face the music. Not true – but the French will fight in their own way. They have led recent military interventions in Mali, Libya, and Cote d’Ivoire, and their troops warred in Afghanistan for a decade. French troops have a presence in ten African countries, and Paris makes no bones about pursuing its national interest by force.

That has made France a vital ally during the last fifteen years, but it also makes the French a target. There is great opportunity for radical Islamic leaders to point the finger and say, see there?  France is oppressing us. France is bombing the Islamic community, and you – you Muslims, you Tunisians, you men from Nice and Belgium – you need to take revenge.

Terrorism is a numbers game. Only a tiny fraction of people commit terrorism, but with the right messaging and examples, that fraction will grow larger. If a powerful symbol tells Muslims to kill Frenchmen in the name of jihad, and is seen successfully defying the West, then more Muslims will kill Frenchmen.  The ideology legitimizes the behavior. That is what has happened with ISIS.  The fraction has grown, and now it is out of control.

Even though no tie between the Nice attacker and the Islamic State has yet been reported, ISIS still matters. It is a powerful symbol of Islamic defiance, like Al Qaeda before it, and needs to be destroyed. The French are now likely to do so. It may be best for President Obama’s political legacy not to send combat troops back to Iraq, but he is buying that legacy with French lives.  And Belgian ones, for that matter. Turks too. And Syrians above all.

Almost certainly, France will now abandon its subordination to the United States in the ISIS war.  It will abandon its efforts to get rid of Syrian President Bashar Assad, and abandon its efforts to rid the Levant of Russian and Iranian influence.  Now it needs to destroy the beast.  If America will not step up and lead the campaign, Russia is more than willing.  The next step might well be a tacit revival of the old French-Russian alliance of a century ago, if not in Europe than in the Middle East.  Russia is many things, but if Russian power can keep France safe, Hollande is likely to snatch at it.

Andrew L. Peek is a former U.S. Army intelligence officer and a professor at Pepperdine University.

Andrew Peek was a strategic adviser to the top U.S. and NATO commander in Afghanistan. Follow him on Twitter at @AndrewLPeek.