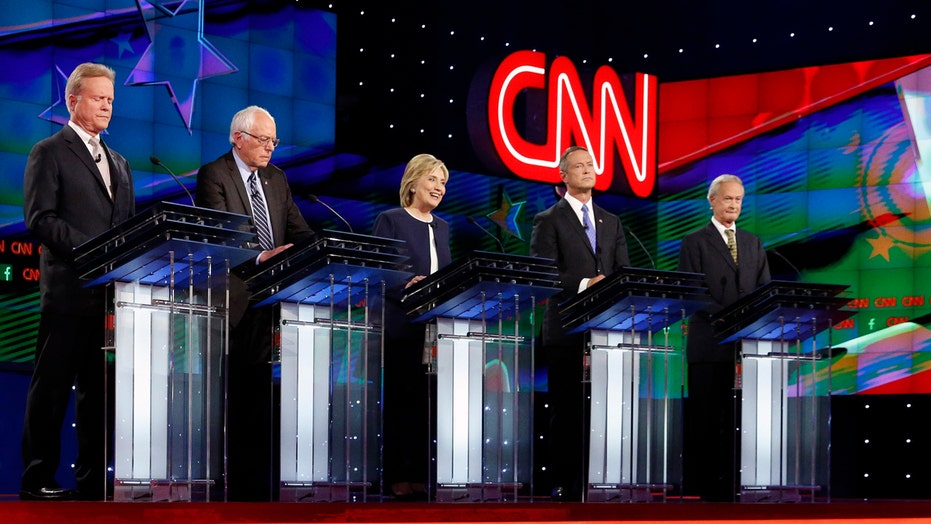 Did the media go easy on democratic debate candidates?

Bias Bash: Cal Thomas weighs in on whether the media left out the tough questions at the first presidential democratic debate

Watching the Democratic candidates' presidential debate Tuesday night one might think a Republican has been in the White House since 2009. These political Lilliputians could find little to say that was positive. The economy is bad, too many people aren't working (whose fault is that?), we should spend trillions more we don't have because everything we're spending now isn't producing results. Memo to Democrats: If your policies are failing, try something different.

These Democrats want to spend more on government education, though, again, what we're spending isn't producing better-educated kids. Empowering parents to choose which schools would best serve them and their children would improve their educational outlook, but Democrats are in the pocket of teachers unions. They stand for choice on abortion, but oppose choice for those who survive the womb.

Climate change they accept as a matter of faith. Bernie Sanders says "scientists" agree and most, but not all, think it is a greater threat than terrorism, China or Russia, while others believe there is "little evidence" to prove such a wide-sweeping contention. Members of cults will not entertain facts contrary to their beliefs.

The National Rifle Association was predictably denounced, as if guns shoot themselves and the people who are intent on breaking the law will somehow become law-abiding if more gun control laws are passed. Again, the notion of personal responsibility and accountability are things that seem foreign to some Democrats.

Memo to Democrats: If your policies are failing, try something different.

"Millionaires and billionaires" came in for their usual thrashing. Not paying their "fair share." We've heard that one before. What is "fair"? A better question: Why do you politicians waste so much money? Cut spending and you won't need more revenue.

Another question for Democrats: Why don't you ever applaud the hard work and risk-taking necessary to become wealthy, or at least self-sustaining, and suggest that others follow that example? The model we once taught was inspiration followed by motivation followed by perspiration improves any life. For Democrats it has become envy, greed and entitlement. You can't make it without us they tell their constituents. You won't make it with us, they fail to say, but you will feel better about failing because you will have voted for people who want to tear down the evil wealthy and punish success.

Pundits judged Hillary Clinton the winner of the debate, but her competition was weak. The contrast with Republicans, who in their debates have displayed greater bench strength, was apparent, as was the lack of diversity among the Democratic candidates. There were four aging white males and an aging white woman. Contrast that bunch with the Republican candidates: there were two with Hispanic backgrounds, an African-American physician, a woman with real business experience, former and current governors and several senators. If you are into identity politics the Republican Party is the one for you.

In Tuesday's debate there was nothing about what people could, or should, do for themselves. It was all about government -- big government, regulatory government, nanny government. The individual who shows initiative and succeeds is no longer the model; instead it's the government is your keeper, you shall not want model. Even though government regularly proves its inability to achieve its advertised results, Democrats want us to believe that given more time -- and especially more of our money -- they can make it work. That has always been the cry of liberalism in its many incarnations.

Most of the media will spin the Democratic debate as refreshing and new, but it was stale, old and uninspiring, like the candidates.