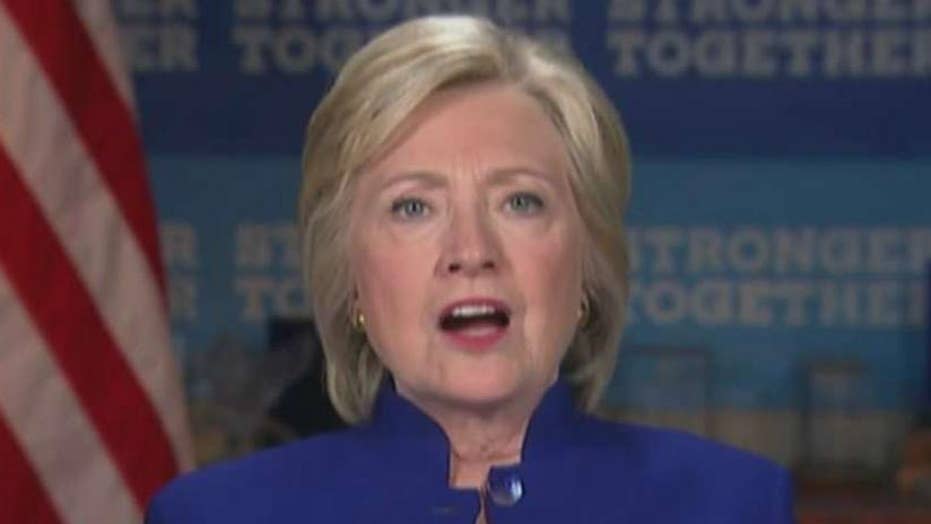 Even Hillary wonders why she isn't '50 points ahead'

Clinton wondered in a video conference to a gathering in Las Vegas of the Laborers' International Union of North America why she isn't beating Trump handily. Is she - along with other Dems - worried? Dem strategist Joe Trippi goes 'On the Record'

If we were on Donald Trump’s debate-prep team, we would advise the GOP nominee to watch two new videos of his opponent, if for no other reason than to boost his confidence. The first is Hillary Clinton’s video-conference address to a labor union; the second, her appearance as a guest on “Between Two Ferns,” Zach Galifianakis’s FunnyOrDie.com interview show.

You might have read about Wednesday’s address to the Laborers’ International Union of North America, which was meeting in Las Vegas. From Orlando, Fla., as the Washington Post reports, Mrs. Clinton, after having “ticked off her pro-union positions,” said: “Having said all this, ‘Why aren’t I 50 points ahead?’ you might ask?”

It immediately made us think of the most famous line perhaps in the history of presidential debates, and certainly in the history of satirical ones: “I can’t believe I’m losing to this guy.” That was Jon Lovitz on “Saturday Night Live” as Gov. Michael Dukakis in 1988, responding to the clichéd rambling of Dana Carvey as Vice President George Bush. (Note to our millennial readers: In the olden days, “Saturday Night Live” was funny.)

But the video of Mrs. Clinton gives a different impression. Whereas Dukakis, both in real life and in Lovitz’s depiction, came across as bland and affectless, Mrs. Clinton seems bitter and angry. “Nobody should be fooled!” she shouts. “He built up his wealth by stiffing small businesses and contractors. That goes against everything we stand for as a country. My Dad was a small business. I’m just—businessman. I’m just happy he never did business with Trump!”

James Taranto writes the popular Best of the Web column for WSJ.com. In August 2007 he was named a member of The Wall Street Journal's editorial board. Follow him on Twitter @jamestaranto.