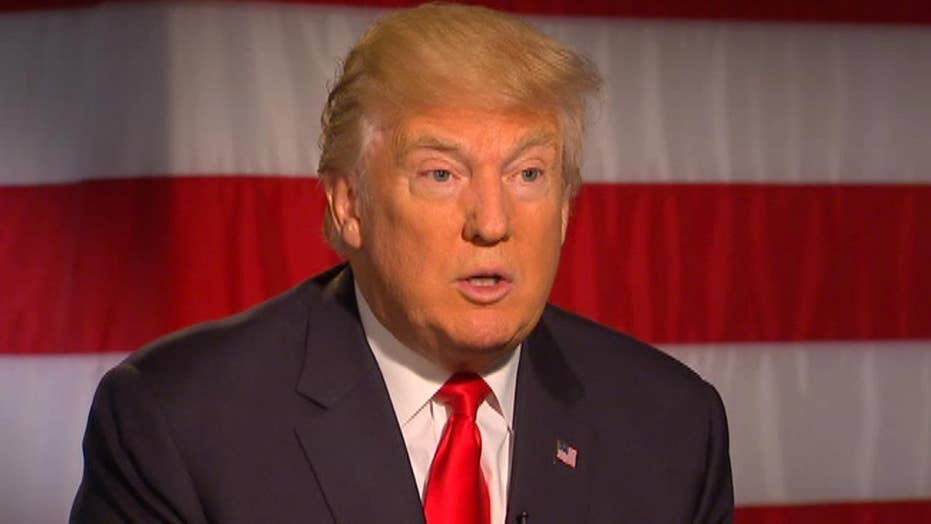 Trump explains how he made his Supreme Court picks

Donald Trump took an important step Wednesday in his quest to convince conservatives that, if elected president, he will deliver on the issues they care about.

Addressing the all-important issue of Supreme Court appointments, Trump released a list of eleven potential nominees, while making it clear that his list was inspired by Justice Antonin Scalia’s “reverence for the Constitution.”

The reaction from legal scholars on the right to the eleven names was overwhelmingly positive, even among those who remain otherwise skeptical of Trump.

Professor John Yoo, a top lawyer in George W. Bush's Justice Department, called it an "all-star list of conservative jurisprudence," adding that "Everyone on the list is an outstanding legal conservative."

Trump’s list also drew praise for its inclusion of five state Supreme Court judges at a time when there are no state judges on the United States Supreme Court and state courts tend to be overlooked when potential Supreme Court nominees are discussed. That tendency is unfortunate because of the wealth of judicial talent on state benches and because, as Yoo points out, "State supreme-court justices will have special sensitivity to the balance between federal power and state sovereignty."

Also notable on the Trump list is the inclusion of Texas Supreme Court Justice Don Willet, a conservative favorite whose frequent tweets have included ones critical of Trump. Willet’s inclusion signals that Mr. Trump is more interested in unifying the Republican party than in holding grudges against his critics.

Perhaps the most powerful, though unintended, endorsement of the list’s conservative bona fides came from Trump’s likely opponent this fall. Within hours of the list’s release, Hillary Clinton was raising money by warning progressives that “The list includes extreme ideologues who, if given the chance, would likely roll back our progress in critical fights like marriage equality and health care -- and would do devastating damage to a woman's right to choose, a union's right to organize, and everyone's right to vote.”

Translating that to conservative-speak, Clinton is saying that the folks on Trump’s Supreme Court list can be counted on to protect religious liberty, strike down any unlawful provisions in ObamaCare and its implementing regulations, allow reasonable restrictions on abortion, protect the rights of workers who choose not to join a union, and uphold states’ efforts to combat voter fraud, all of which describes the type of judge conservatives are looking for.

That Mr. Trump took the unusual step of issuing this Supreme Court list indicates that he's eager to reassure conservatives on an issue they care deeply about and is willing to make judicial appointments a high priority.

Nonetheless, Mr. Trump still has work to do in winning the confidence of parts of the conservative legal community. For example, George Washington University law professor Orin Kerr worries that "Trump’s press release does not commit to choosing from this list." In other words, what’s to stop Trump from changing his mind, Kerr wonders.

A list, by itself, cannot and should not wipe away all doubts. But even a Supreme Court list that is not completely binding is more reassuring than no list at all, which is what we got from all previous presidential nominees and are likely to get from Hillary Clinton.

Similarly, Trump was the only one of the 22 Republican and Democratic presidential contenders this year to promise to produce such a list. Trump may be short on specifics in some areas, but on the issue of judicial appointments, he has set the standard for being specific.

Even Presidents Reagan and George W. Bush chose Supreme Court Justices who wound up disappointing conservatives. So no matter who had won the GOP nomination fight, there would be no guarantee of satisfaction. About all one can say with confidence is that if Mr. Trump is true to his word and nominates one of the people on his list or somebody similar, he will have done his best to put a Justice in the mold of Antonin Scalia on the Court.

If, on the other hand, Trump is not true to his word, his Supreme Court list will nonetheless prove useful. The list is a written campaign promise that can be used to hold him accountable. Should Trump fail to deliver the type of nominee promised by his list, conservatives will have good reason to oppose his nominee and urge GOP senators to do the same.

In the end, cooperation is more likely to get conservatives what they want than opposition. Mr. Trump, like every president, will need outside help identifying good candidates for the dozens of judicial vacancies that occur each year throughout the federal courts. Given that Trump is new to the judicial nomination game, there is an opportunity for conservatives to have an unusually large input into a Trump administration's judicial picks.

Finally, consider that even if Donald Trump were to pick his judicial nominees from a hat, the results would be far preferable to the long line of progressive ideologues we would get from Hillary Clinton. She will likely appoint at least three Supreme Court Justices if she serves two terms. However, even if Clinton were to add just one more liberal Justice to the four already on the Court, the result would be conservatives' worst judicial nightmare.

The new progressive Supreme Court majority would eviscerate the Second Amendment, religious liberty, school choice, and virtually all constitutional constraints on the power of the federal government, while inventing new constitutional rights to welfare, health care, and taxpayer-funded abortions.

That nightmarish prospect is precisely why Senate Republicans of all ideological stripes have united behind a #NoHearingsNoVotes strategy to block President Obama’s attempt to make Merrick Garland the Supreme Court’s fifth liberal. With so much at stake and a presidential election just around the corner, it is a moral imperative that the American people have a say in the Court's future when they vote this November.

Trump’s solidly conservative Supreme Court list has made the choice facing voters this fall crystal clear. Given that clear choice, it makes more sense than ever to wait until after the election to fill Justice Scalia’s seat. Vote for Clinton and you get the progressive agenda outlined above. Vote for Trump and you get Justice Scalia’s fidelity to the Constitution. Let the people decide.