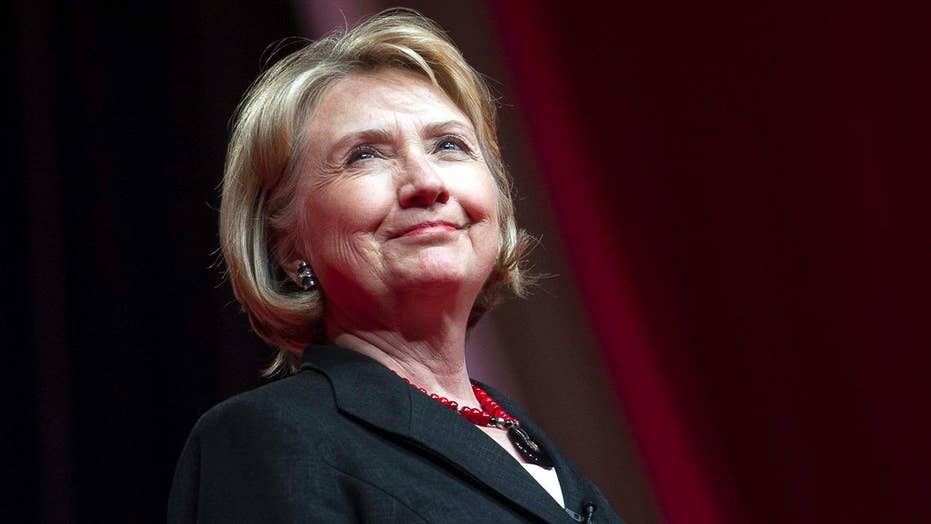 Dems are dreading the release of Hillary's new book

The former Democratic presidential candidate takes on Sanders, Biden and Comey in 'What Happened;' James Rosen takes a look for 'Special Report'

I wasn’t thrilled when I heard Hillary Clinton was writing a book about the election to be released in September. My skepticism didn’t come from not wanting to hear her take on “What Happened” – a book title that everyone and their mother knew would be made fun of in perpetuity – but because I knew how it would be received by all the Hillary haters.

Over 10 months since election day that’s an ever-growing group that includes right wing media, Bernie backers, Bernie himself, Democrats facing re-election (and others that have taken to hating on her because it’s become so acceptable), pundits looking for a great soundbite, Trump backers, traditional Republicans and the president himself.

Hillary Rodham Clinton, center, greets people who waited in line of a signed copy of her book "What Happened" at a book store in New York, Tuesday, Sept. 12, 2017. (AP Photo/Seth Wenig) (AP)

And they did it all.

I haven’t laughed once.

The notion that Hillary shouldn’t be writing about the election and her experience is fundamentally silly. She’s bound to have some valuable insight since A) she’s the only person who actually lived this campaign as the candidate; B) she had conversations that we certainly weren’t privy to; C) she’s smarter than 99% of us and we can learn a lot from her and D) she’s earned the right to do whatever she wants short of committing a crime (NB: the private email server is still not a crime).

Hillary wrote the book because even if you don’t like her, she’s got some important things to tell us about how democracy is working in America today.

Even Republicans who strongly dislike her, like John Podhoretz, have called it a “ludicrous idea” that she shouldn’t have written this book. And frankly, why does it bother so many people? If she’s irrelevant then get back to Twitter and Game of Thrones, leave her alone and don’t buy the book. She doesn’t need the money anyway.

I’m sure that last line ticked a few of you off and you might have even said “Goldman Sachs speeches” or “the Clinton Foundation is a slush fund” under your breath while you sit at your desk. I get it. You think she’s a crook deserving of the moniker Crooked Hillary and got into public service to get famous and rich.

But it matters that she didn’t need the money. No one is getting rich (or even richer) off a book nowadays anyway. And she didn’t need more fame – she could just go for a walk in the woods and eat up the whole news cycle.

Hillary wrote the book because even if you don’t like her, she’s got some important things to tell us about how democracy is working in America today.

Can anyone who isn’t motivated by sheer hatred of Hillary or liberals show that the factors she highlights as contributing to her loss aren’t legitimate? She writes about the information campaign from the Kremlin, Jim Comey’s outsize effect on the election, a press focused on her emails, an angry electorate, non-stop coverage of empty podiums waiting for Trump, misogyny, history and election patters, Clinton fatigue and the one that all the haters wanted. “I go back over my own shortcomings and the mistakes we made. I take responsibility for all of them. You can blame the data, blame the message, blame anything you want – but I was the candidate,” she wrote.

That sounds like taking responsibility to me. It’s pretty plain English.

It baffles me why Americans on the whole don’t want to talk about these critical issues. Not because the election was stolen by Vladimir Putin so he could install his preferred puppet in the White House, but because we’re going to have another election in a few years and we’ve got to do better.

Democrats have to put up a candidate that resonates with an increasingly fractured party. We have to talk about the economy – like all the time. We have to focus on the middle of the country instead of the coasts. We have a lot to do.

But what we don’t have to do is rag on Hillary for giving her read on the election and how we ended up with President Trump. What’s more, no one is forcing you to read it, though I can guarantee it’s a better read than whatever Trump will publish when he needs to explain his loss in 2020.