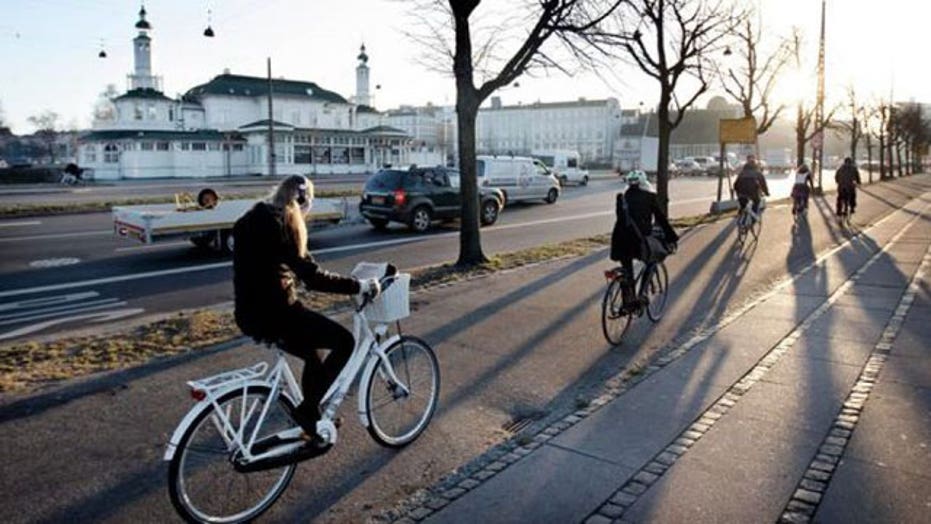 What are college professors (not) teaching?

With two teenage daughters, I try to stay “relevant.” It’s not easy. So, I like to scout around the Internet to see what’s “trending” among teens and college students. What I find is sometimes fatuous. And mystifying.

A recent popular post “shared” on a college student’s Facebook page lamented life in the U.S. and extolled how wonderful it is in Denmark –the happiest place on earth! One person wrote, “Let’s follow Denmark! The Declaration of Independence states, ‘the pursuit of happiness is an inalienable right.’”

(Actually, the Declaration’s final draft was “unalienable,” but I don’t want to quibble.)

Photographs on the post displayed happy Danish faces with captions that read, “Free Child Care, Free Health Care, Free University, $20 Minimum Wage.” My favorite photo was a grinning guy with his feet propped up on his work desk accompanied by the words, “33 Hour Work Week!”

You get the impression that everyone is giddy with happiness in Denmark. Because everything there is free. There were 40,000 “likes” and nearly 100,000 “shares.” But the “comments” are what caught my attention.

They castigated America for wasting taxpayer money on military defense instead of adopting the Danish system of vast social welfare programs. (Forget that we spend only 5% of GDP on defense.) Capitalism was ridiculed as evil. Socialism was heralded as panacea.

I searched for evidence of intelligent life in the “comments,” but it was sparse. Maybe the facts were getting in the way of a good story, I thought. Some of the most intense and obtuse commentary came from college students.

Here is what professors should be explaining to students: if it’s too good to be true, then it probably is. Or another felicitous proverb: you can’t get something for nothing.

Look beyond the veneer and you’ll discover that all the seemingly free things in Denmark are not free at all. The people who get them pay for them in the form of exorbitant taxes. Which leaves them with comparatively little disposable income. Denmark has the highest income tax rate in the world among developed countries. It’s top rate is a whopping (or choking) 60 % for anyone earning more than $ 55,000.

And all those beguiling benefits? Those are taxed as well when you receive them. Denmark levies a staggering 28% tax on jobless benefits and pension payments.

It doesn’t stop there. What little money is left over after taxes, is taxed yet again! Denmark has a 25% national sales tax on almost all goods and services.

Want to buy a car in Denmark? You can’t unless you fork over a punitive 200% vehicle tax. A $25,000 automobile here in the U.S., would cost $75,000 in Denmark. But let’s say you get your hands on a car, can you afford the gas? It’ll run you $8 to 9 dollars per gallon because taxes more than double the cost. No wonder most people ride bikes. But then, it’s a small place.

Oh, that free education Danes brag about? It reminds me of another proverb: you get what you pay for. Quality and accountability are somewhere between dubious and dreadful.

True, Denmark spends little on its military, just 1.4 % of its GDP. As a tiny nation with few enemies, it has the luxury of relying on NATO and the U.S. for its security and sovereignty. Denmark’s contribution to NATO is minuscule, while America pays 73% of NATO’s defense expenditures.

Were it not for the military spending and capability of larger nations like the U.S., Denmark would be unable to spend so much of its own money on a capacious social welfare system. But is this inconvenient fact ever broached inside the classrooms on college campuses? Judging by all the comments in the “happy Denmark” post, I seriously doubt it.

Nor, I suspect, do students learn that Denmark’s vaunted social welfare state isn’t the utopia it may seem. Good luck if you get seriously sick there. The medical system is disparaged as inefficient and poor. Waiting times for specialized treatment and surgery are long, which is typical of countries that have adopted socialized medicine. Quality of care is diminished.

Crime? Well, I guess not all Danes are happy. It has the highest burglary rate per capita in the European Union. Perfectly understandable. People often confuse socialism with thievery.

Denmark may pretend its generosity exceeds all other nations when it comes to social programs, but that is a fallacy. The truth is that America spends more per person on social welfare benefits, including health care, than Denmark. When you subtract taxes paid, then factor in tax breaks plus private spending, the U.S. spends more per capita relative to GDP than Denmark. Substantially more.

The essential difference is America’s philosophy toward social programs. Denmark provides the same basic benefits to everyone. The U.S. offers benefits to those in need and taxes them less.

The genius of America’s egalitarianism is equality of opportunity. Social welfare states like Denmark champion equality of outcome. In America, we create an incentive to work, achieve and profit thereby. Denmark creates a disincentive.

I doubt any of this is taught by most college educators in America who are overwhelmingly liberal. A national survey conducted by UCLA found that 63% of professors describe themselves as liberal or far left. A scant 12% called themselves conservative or far right. And the liberal trend has increased in the last few years.

Students who decry America’s free enterprise system and its reliance on hard work, initiative and entrepreneurship are myopic. They fail to see the truth amid all the socialist hype.

Teased by hope out of ignorance, they glorify Denmark as an idyllic place where everyone lives in bliss, thanks to government gratis. Sadly, these students are not well informed.

In a college environment where the free exchange of ideas and information is treasured, students have a lot to learn.

I’ve been to Denmark. While it’s a beautiful country filled with friendly people, I don’t want to live there. I value the rewards of merit and hard work. The Danes claim they’re happy. Good for them. They seem to like their social welfare state. It’s not that working hard is anathema there, it’s just not preferred.

Don’t get me wrong. There’s nothing rotten in Denmark, as Shakespeare mused. I love Danish pastry. Who doesn’t? But my fervent wish is that in college classrooms across America, professors remember the premise and wisdom of another proverb: there are always two sides to every story.

Maybe three. Yours, theirs and the truth.