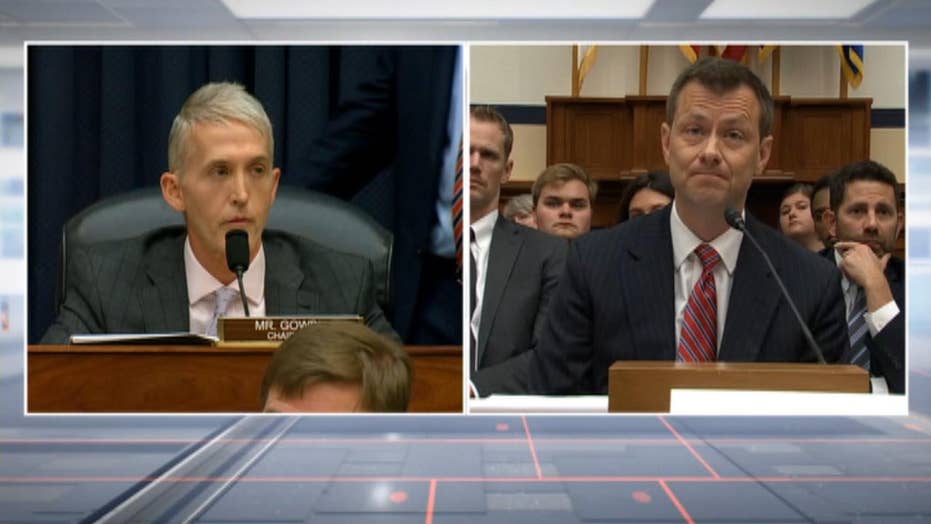 In his daylong testimony Thursday before two U.S. House committees, FBI official Peter Strzok did nothing to counter the conclusion of the Justice Department inspector general that he and other FBI agents “demonstrated extremely poor judgment and a gross lack of professionalism” while investigating the Trump election campaign and the Hillary Clinton email scandal.

The televised hearing was contentious – with plenty of fireworks as Republicans attacked Strzok and Democrats praised him – but we didn’t learn much. Strzok refused to answer many questions. He used most of this testimony to claim repeatedly that all of his investigative actions were completely above board – despite strong and ample evidence to the contrary.

Both the House Judiciary and Oversight Committees have an obligation to continue their oversight investigations. Americans need to be reassured that biased, partisan and abusive behavior will not be countenanced at the FBI and Justice Department.

Strzok was unapologetic and openly defiant at the House hearing. FBI lawyers on numerous occasions instructed him not to answer questions about matters that are currently under investigation, continuing the same stalling tactics the FBI and the Justice Department have been engaging in for months.

after the hearing Thursday it should be clear to any objective observer that Strzok was desperate to see Hillary Clinton defeat Donald Trump in the 2016 presidential election, as shown beyond doubt by the text message Strzok wrote and exchanged with Page.

Yet at the crowded hearing, Democratic committee members acted more like Strzok’s defense lawyers than seekers of truth. As Republican members asked questions, Democrats repeatedly interrupted with outbursts and objections.

Throughout it all, Strzok denied that his work for the FBI was affected by any of the anti-Trump and pro-Clinton bias he displayed in numerous text messages and emails exchanged with his then-lover and then-FBI attorney Lisa Page. He claimed that “at no time in any of these texts did those personal beliefs ever enter into the realm of any action” he took.

President Trump’s attorney, former New York City Mayor Rudy Giuliani, tweeted Friday: “Peter Strzok’s testimony was a disgrace. It taints the entire Mueller witchunt. President Trump is being investigated by people who possess pathological hatred for him. All the results of the investigation are ‘fruit of the poison tree’ and should be dismissed.”

Don’t expect that to happen, but after the hearing Thursday it should be clear to any objective observer that Strzok was desperate to see Hillary Clinton defeat Donald Trump in the 2016 presidential election, as shown beyond doubt by the text message Strzok wrote and exchanged with Page.

Rep. Louie Gohmert, R-Texas, castigated Strzok for the former FBI counterintelligence chief’s  dubious claim that his opposition to Trump’s election as president had no impact on his conduct dealing with FBI investigations could influence the outcome of the election.

Gohmert stated that FBI agents had told him that Strzok has “embarrassed them.” The Texas congressman went on to say that he couldn’t “help but wonder, when I see you (Strzok) looking there with a little smirk, how many times did you look so innocent into your wife’s eye and lie to her about Lisa Page?”

With that comment, the hearing room erupted. Gohmert was implying that, by lying to his own wife about his affair with Page, Strzok had demonstrated a willingness to lie and therefore damaged his credibility.

Running interference for Strzok, Democrats constantly interrupted Gohmert, objecting to his questioning. Rep. Jerry Nadler, D-N.Y., the ranking minority member, accused Gohmert of “impugning the character of the witness” – as if Strzok’s credibility and honesty were an irrelevant issue.

Strzok’s response to Gohmert was that his question said more about the Texan’s “character and what you stand for and what is going on inside of you.”

Rep. Gerry Connolly, D-Va., accused Republican members of the committees of character assassination and demagoguery, comparing the hearing to a Russian show trial. He showed no interest in asking questions pertaining to the hearing’s subject matter or any of the misdeeds recounted in Inspector General Horowitz’s almost 600-page report.

Instead, Connolly apologized to Strzok for the FBI agent having to answer any questions at all, devoting the rest of his time to attacking the character of President Trump.

Rep. Luis Gutierrez, D-Ill., took a similar tack, spending his questioning time in a tirade against the president.

Despite Strzok’s hard-to-believe claims that the anti-Trump bias he displayed had no effect on his behavior and his conduct in the Clinton email and Russia collusion investigations, Rep. Trey Gowdy, R-S.C., pointed out that Special Council Mueller “kicked him (Strzok) off” the Russia investigation when Mueller discovered Strzok’s anti-Trump texts and emails in May 2017.

As Gowdy said, the “bias manifest in those texts … made (Strzok) unfit to objectively and passionately investigate” the case.

Another member pointed out that the bias shown by Strzok in his written communications would get him excused from a jury and would require a judge to recuse himself from presiding over a case.

But Strzok insisted that he had no need to recuse himself from either the Clinton email or Russia investigations.

Gowdy told Strzok that he did not “appreciate having an FBI agent with an unprecedented level of animus working on two major investigations during 2016.”

Amazingly enough, Strzok claimed he couldn’t remember writing some of his most damning text messages.

In one text exchange, Page wrote to Strzok, referring to Trump: “He’s not ever going to become president, right? Right?!” Strzok replied: “No. No he won’t. We’ll stop it.” Strzok also texted about having an “insurance policy” against Trump being elected.

But Strzok tried to explain his text away by saying he was referring to the general public and his belief that the American people would not elect someone demonstrating the “horrible, disgusting behavior” of Donald Trump. He also denied that derogatory texts he wrote about Trump supporters were derogatory.

However, Strzok acknowledged at the hearing that he “detested” Trump.

One of the most concerning facts that came out was Strzok’s admission that he had not provided Inspector General Horowitz with text messages on his personal phone. So there may be an even bigger treasure trove of texts reflecting Strzok’s attitude and behavior yet to be examined.

If the FBI was investigating an ordinary American, the agency would demand access to personal as well business devices and telephones to look for relevant evidence. But Strzok was adamant that he would not provide his personal texts. Why is he getting what appears to be special treatment?

Thursday’s hearing must not be the last we hear about the impact of anti-Trump bias by the FBI and the Mueller team – not just in past investigations that involved Strzok, but in the continuing Mueller probe.

All Americans who are subjected to law enforcement investigations – including President Trump and people working for him – are entitled to fair and unbiased treatment from investigators seeking the truth. It certainly appears that Strzok did not give Donald Trump and his campaign that kind of fair treatment, free of political bias.

Before we evaluate whatever conclusions the Mueller probe makes when it finally ends, the American people have a right to know if bias by the investigators tainted the validity of those conclusions.

Thursday’s House hearings must not be the last we hear about the impact of anti-Trump bias by the FBI and the Mueller team.